From Infogalactic: the planetary knowledge core
Jump to: navigation, search
This article is about the writer on etiquette. For the logician, see Emil Post. 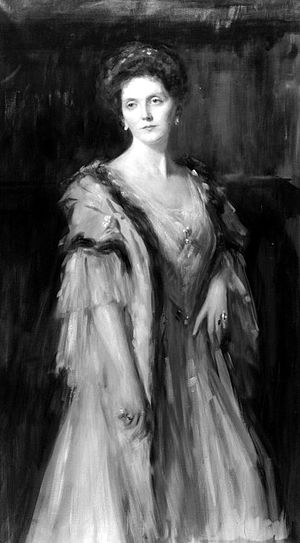 Post was born Emily Price in Baltimore, Maryland, possibly in October 1872[1] (the precise date is disputed).[lower-alpha 1] Her father was the architect Bruce Price and her mother was Josephine (Lee) Price of Wilkes-Barre, Pennsylvania. After being educated at home in her early years, Price attended Miss Graham's finishing school in New York after her family moved there.[3]

The New York Times' Dinitia Smith reports, in her review of Laura Claridge's 2008 biography of Post,[4] "Emily was tall, pretty and spoiled. [...] She grew up in a world of grand estates, her life governed by carefully delineated rituals like the cotillion with its complex forms and its dances — the Fan, the Ladies Mocked, Mother Goose — called out in dizzying turns by the dance master.[1]

Price met her future husband, Edwin Main Post, a prominent banker, at a ball in a Fifth Avenue mansion. Following their wedding in 1892 and a honeymoon tour of Europe, they lived in New York's Washington Square. They also had a country cottage, named "Emily Post Cottage", in Tuxedo Park, which was one of four Bruce Price Cottages she inherited from her father. The couple had two sons, Edwin Main Post, Jr. (1893) and Bruce Price Post (1895).[5]

The couple divorced in 1905, because of her husband's affairs with chorus girls and fledgling actresses, which made him the target of blackmail.[5]

When her two sons were old enough to attend boarding school, Post began to write. She produced newspaper articles on architecture and interior design, as well as stories and serials for such magazines as Harper's, Scribner's, and The Century. She wrote the five novels: Flight of a Moth (1904), Purple and Fine Linen (1906), Woven in the Tapestry (1908), The Title Market (1909), and The Eagle's Feather (1910).[6] In 1916, she published By Motor to the Golden Gate - a recount of a road trip she made from New York to San Francisco with her son Edwin and another companion.[7]

Post wrote in various styles, including humorous travel books, early in her career. Post published her first etiquette book Etiquette in Society, in Business, in Politics, and at Home (1922, frequently referenced as Etiquette) when she was 50;[1] it became a best-seller, with updated versions continued to be popular for decades, and it made her career.[8] After 1931, Post spoke on radio programs and wrote a column on good taste for the Bell Syndicate; it appeared daily in some 200 newspapers after 1932.[citation needed]

In her review of Claridge's 2008 biography of Post,[4] The New York Times' Dinitia Smith explains the keys to Post's popularity:[1]

Such books had always been popular in America: the country’s exotic mix of immigrants and newly rich were eager to fit in with the establishment. Men had to be taught not to blow their noses into their hands or to spit tobacco onto ladies’ backs. Arthur M. Schlesinger, who wrote “Learning How to Behave: A Historical Study of American Etiquette Books” in 1946, said that etiquette books were part of “the leveling-up process of democracy,” an attempt to resolve the conflict between the democratic ideal and the reality of class. But Post’s etiquette books went far beyond those of her predecessors. They read like short-story collections with recurring characters, the Toploftys, the Eminents, the Richan Vulgars, the Gildings and the Kindharts.

Emily Post's name has become synonymous, at least in North America, with proper etiquette and manners. More than half a century after her death, her name is still used in titles of etiquette books.[15] Laura Claridge wrote a book addressing that topic: Emily Post: Daughter of the Gilded Age, Mistress of American Manners (2008), the first full-length biography of the author.[16]

Frank Tashlin featured Post's caricature (emerging from her etiquette book and scolding England's King Henry VIII about his lack of manners) in his cartoon Have You Got Any Castles? (1938).

In 1950, Pageant named her the second most powerful woman in America, after Eleanor Roosevelt.[1]