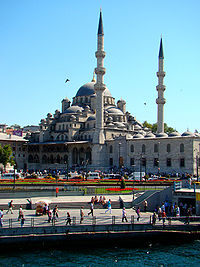 The New Mosque seen from the Galata Bridge

Eminönü is a former district of Istanbul in Turkey, now a neighbourhood of Fatih district. This is the heart of the walled city of Constantine, the focus of a history of incredible richness. Eminönü covers roughly the area on which the ancient Byzantium was built. The Galata Bridge crosses the Golden Horn into Eminönü and the mouth of the Bosphorus opens into the Marmara Sea. And up on the hill stands Topkapı Palace, the Blue Mosque (Sultanahmet Camii) and Hagia Sophia (Aya Sofya). Thus Eminönü is the main tourist destination in Istanbul. It was a part of the Fatih district until 1928, which covered the whole peninsular area (the old Stamboul) within the Roman city walls - that area which was formerly the Byzantine capital Constantinople. Since the resident population of Eminönü is low today, it rejoined the Fatih district in 2009. 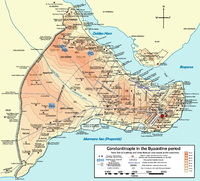 Map of the city in the Byzantine period

The Golden Horn was a natural port, particularly the Eminönü/Sirkeci shore, which being on a peninsula was also eminently defensible. It was this location that led to the foundation of Byzantium, and from here that the city grew, with the oldest neighbourhoods being the port districts along the Golden Horn. In the 12th century, the Byzantine port was also occupied by merchants from Venice, Amalfi, Genoa and Pisa, who eventually acquired their own wharfs and waterfront districts.

The Golden Horn was still a thriving port in Ottoman times, occupied by importers, warehousemen, sailors and traders of every description, the centre of trade in the city, a labyrinth of narrow streets, workshops and markets leading uphill to Topkapı Palace, the Ottoman capital.

The name of the neighbourhood, Eminönü, reflects its place in history. Translated from Turkish to English it roughly means 'in front of justice'. Emin meaning 'justice', önü meaning 'in front of'. The name most probably came from the Ottoman courts and customs houses on the docks; "Emin" was the title of an Ottoman customs official.

The nature of the place was changed by the industrial age; the Galata Bridge was built across the Golden Horn; steamships arrived, then electricity, then the railway and the Istanbul terminal of the Orient Express was naturally sited at Sirkeci Station. The sea walls still surrounded the city, and the sea gates of the port of Eminönü were the point of entry for goods, and for people. Eminönü was a part of the Fatih district until 1928. She became district of İstanbul in 1928.

In the wake of the huge railway station, other grand stone buildings were also built in the late Ottoman period. Among these were the Main Post Office and some commercial buildings like Istanbul 4th Vakıf Han. In the early days of the Republic of Turkey, Eminönü was renovated extensively; the big square was opened up in front of Yeni Cami by clearing out the tollbooths at the end of the Galata Bridge; the Spice bazaar was restored; the fish market was cleared off the shore of the Golden Horn and a road opened up to the new bridge at Unkapanı.

By the 1950s, the area was continuously clogged up with traffic, which was eased somewhat by the construction of the large coastal road around the point and all the way out to Istanbul airport.

Although the government has moved to Ankara and Istanbul has expanded to become an enormous city with the centre of business in huge shiny buildings elsewhere, Eminönü is still buzzing with activity. It has the busiest ferry crossings for the Bosphorus and for the Marmara Sea, the only car ferry across the Bosphorus and the only mainline railway terminus (where trains can be caught to Eastern Thrace (Trakya) and Europe). People keep streaming into the area on boats, buses, trains and the light metro from Aksaray.

During the daytime the area is packed with merchants and their customers, hordes of shoppers and many tourists. Add to this a number of key government buildings including the governor's office and the main campus of Istanbul University in Beyazıt.

At night it is a quiet place. There is some housing in Eminönü but most of the buildings are offices, shops and workshops, and if one does happen to be there in the evening the contrast with the daytime is eerie and somewhat menacing. Every day roughly two million people work in or pass through Eminönü, but the district has only 30,000 residents. The people that do live in Eminönü are mainly working class and conservative.

Eminönü has many historical mosques and buildings, many of Istanbul's best-known landmarks. Recent development has improved Eminönü greatly and many of its winding streets which can at first seem imposing, have been developed and improved, while Eminönü has started to repair the many mosques. 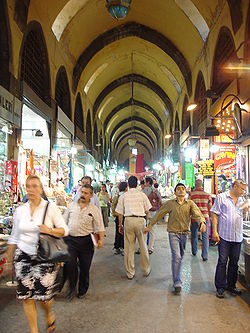 Inside the Spice Bazaar

The area is heaving with shoppers; especially at weekends people come from all over the city, looking for discount clothing or plastic accessories, stationery and cheap toys in the streets behind the Spice Bazaar. You will not find the classy boutiques of the big shopping centres here. The clientele in Eminönü is traditional and working class. The narrow climbing street called Mahmutpaşa for example is the place where those of a conservative nature come to buy a coat or a headscarf, or to kit their boys out in the costume they wear on circumcision day.

Eminönü is crawling with thousands of people hawking goods on handcarts, makeshift stalls or a blanket laid out in the street, as well as the millions of little shops and workshops in the streets, bazaars and the big stone fortresses from the Ottoman era called Han in Turkish. Every inch is retail space, even the underpasses taking people from the ferries are lined with shops, kebab grillers and boys selling cigarettes. Predictably there is a fair amount of purse-snatching and pickpocketing in the crowds. And the narrow streets are hard to keep clean.

There are so many businesses packed into such a small area that a single street or even a single building can be the centre of a particular trade, and turning a corner will take you into a totally different atmosphere. Here you are surrounded by stall after stall of denim jeans, and across one block you are submerged in the scent of coffee and spices. The variety is breathtaking and Eminönü takes some exploring.

Some well known sub-districts (semt) include: 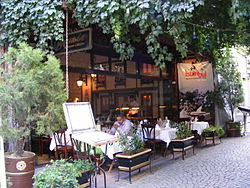 A restaurant in Eminönü

In the daytime the choice of food is incredible, and in particular the area is covered with 'lokanta' serving soups, stews and hot vegetable dishes at lunchtime. You will find these in all the bazaars and shopping streets, for example the street called Hocapaşa near Sirkeci station has a great variety. Eminönü offers any number of fast foods and snacks including döner, lahmacun and the grilled mackerel sandwiches on the waterfront by the ferry docks. These used to be sold from boats, this is now banned but you can still find mackerel grillers in the area.

Much of the neighbourhood is closed down in the evening although you will still find food in the following places:

The following movies have scenes taking place in Eminönü: