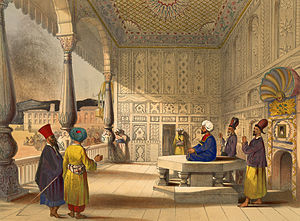 The court of the Durrani Emirate of Afghanistan in 1839.

Emir (/əˈmɪər, eɪˈmɪər, ˈeɪmɪər/; Arabic: أمير‎‎ ʾAmīr [ʔæˈmiːr]), sometimes transliterated (olowan, Datu in Meranau common version.) Amir, Amier or Ameer, is an aristocratic or noble title of high office used in a variety of places in the Arab countries and Afghanistan. It means commander, general, or prince. The feminine form is Emira (أميرة ʾAmīrah). When translated as prince, the word "emirate" is analogous to a sovereign principality.

Amir, meaning "Emperor" or "commander-in-chief", is derived from the Arabic root a-m-r, "command". Originally simply meaning commander-in-chief or leader, usually in reference to a group of people, it came to be used as a title for governors or rulers, usually in smaller states, and in modern Arabic is analogous to the English word "prince". The word entered English in 1593, from the French émir.[1] It was one of the titles or names of the Islamic prophet Muhammad. 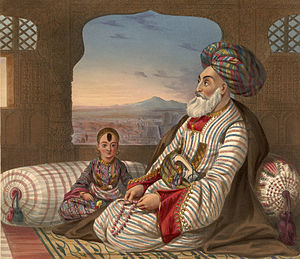 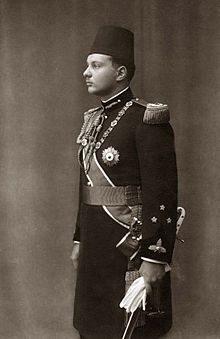 HRH Crown Prince Farouk, Amir of the Kingdom of Egypt and the Sudan, on ascension to the throne 1936 as HM King Farouk I. 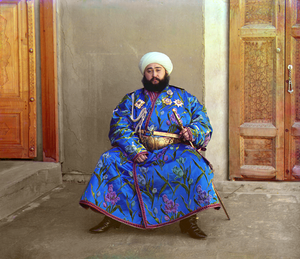 From the start, Emir has been a military title.

In certain decimally-organized Muslim armies, Amir was an officer rank. For example, in Mughal India Amirs commanded 1000 horsemen (divided into ten units, each under a Sipah salar), ten of them under one Malik. In the imperial army of Qajar Persia:

In the former Kingdom of Afghanistan, Amir-i-Kabir was a title meaning "great prince" or "great commander."