Emma Gifford was born in Plymouth, Devon, on 24 November 1840[2] The second youngest of five children, her father was John Attersoll Gifford, a solicitor, and she was named after her mother, Emma Farman Gifford. Emma's father retired early and relied on his mother's private income, so when her grandmother died in 1860, the family had to make economies and moved to a cheaper rented house in Bodmin, Cornwall.[3] Emma and her elder sister Helen had to work as governesses and Helen became an unpaid companion to a lady in whose home she met her husband, the Reverend Caddell Holder. Emma joined her in 1868, to help with housekeeping and to run the parish.[2]

Emma Gifford met the writer Thomas Hardy in 1870 when he was working as an architect. Hardy had been commissioned to prepare a report on the condition St Julitta's, the parish church of St Juliot, near Boscastle in Cornwall. Their courtship inspired Hardy's third novel, A Pair of Blue Eyes.[1] They did not marry until four years later on 17 September 1874 at St Peter's Church, Paddington, London. The ceremony was conducted by Emma's uncle, Edwin Hamilton Gifford, Canon of Worcester Cathedral and later Archdeacon of London. The Hardys honeymooned in Rouen and Paris.[4]

The Hardys were never able to have children, which may have affected their relationship. After twenty years of marriage, Thomas Hardy published Jude the Obscure, controversial for its portrayal of Victorian religion, sexual mores and marriage. Emma disapproved of Hardy's last novel because of the book's criticisms of religion and also because she worried that the reading public would believe the relationship between Jude and Sue paralleled her strained relationship with Hardy.[5] Emma and Hardy spent more and more time apart and he began seeing other women such as Florence Dugdale, companion to Lady Stoker, sister-in-law of Bram Stoker, author of Dracula. Hardy portrays Florence in various poems such as "On the Departure Platform". In 1899 Emma became a virtual recluse and spent much of her time in attic rooms, which she asked Thomas Hardy to build for her and she called ‘my sweet refuge and solace.’.[5]

An active suffragist and supporter of women's suffrage, in 1907 Emma Gifford joined George Bernard Shaw and his wife in a march in London.[3] 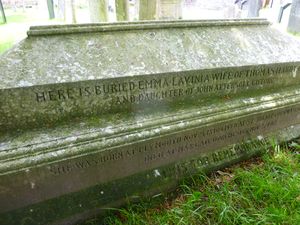 Emma Gifford died at Max Gate, the house she shared with Hardy near Dorchester on 27 November 1912 at the age of 72.[1] On the 26th she had felt unwell and allowed a doctor to visit but not to examine her. At 8 in the morning of 27 November her maid found Emma 'moaning and terribly ill'. The maid summoned the cook, who attempted to carry her down the staircase but by the time Hardy had been called he found her unconscious and she died shortly afterwards. The doctor gave the cause of death as heart failure and impacted gallstones. She was buried three days later at the church of St Michael, Stinsford, Dorset. Thomas Hardy had a wreath inscribed "From her lonely husband, with the Old Affection."[5]

Satires of Circumstance, Thomas Hardy’s fourth book of verse, includes The Poems of 1912-13, a collection of poems written immediately following Emma's death.[6] Hardy found a notebook entitled "What I Think Of My Husband" in her attic bedroom and spent the rest of his life regretting the unhappiness he had caused her.[7]

After Emma's death Thomas Hardy also discovered a book bound in brown paper, made from the pages of exercise books and stitched together with red thread. The title was Some Recollections by E. L. Hardy and the last page was headed 4 January 1911. The manuscript covered Emma's early life, up to the time of her marriage. Thomas Hardy included part of it in his autobiography, The Early Life of Thomas Hardy, in pages 88-96. The whole of it was edited by Evelyn Hardy and Robert Gittings and published with "some relevant poems by Thomas Hardy" in 1961; a revised edition was published in 1979.[8][9]