Emma of Normandy (c. 985 – 6 March 1052) was a queen consort of England, Denmark and Norway. She was the daughter of Richard I, Duke of Normandy, and his second wife, Gunnora. Through her marriages to Æthelred the Unready (1002-1016) and Cnut the Great (1017-1035), she became the Queen Consort of England, Denmark, and Norway. She was the mother of three sons, Edward the Confessor, Alfred, and Harthacnut, as well as two daughters, Goda of England, and Gunhilda of Denmark. Even after her husbands' deaths Emma remained in the public eye, and continued to participate actively in politics. As Anne J. Duggan notes, Emma is the "first of the early medieval queens" portrayed visually and she is the central figure within the Encomium Emmae Reginae, a critical source for the history of early 11th-century English politics.

In an attempt to pacify Normandy, King Æthelred of England married Emma in 1002.[1] Viking raids on England were often based in Normandy in the late 10th century, and this marriage was intended to unite against the Viking threat.[2] Upon their marriage, Emma was given the Anglo-Saxon name of Ælfgifu, which was used for formal and official matters, and became Queen of England. She received properties of her own in Winchester, Rutland, Devonshire, Suffolk, and Oxfordshire, as well as the city of Exeter.[3]

Æthelred and Emma had two sons, Edward the Confessor and Alfred, and a daughter, Goda of England (or Godgifu).

When King Sweyn Forkbeard of Denmark invaded and conquered England in 1013, Emma and her children were sent to Normandy, where Æthelred joined soon after. They returned to England after Sweyn’s death in 1014.

Emma and Æthelred’s marriage ended with Æthelred’s death in London in 1016. Æthelred’s oldest son from his first marriage, Æthelstan, had been heir apparent until his death in June 1014. Emma’s sons had been ranked after all of the sons from his first wife, the oldest of whom was Edmund Ironside.[4] Emma made an attempt to get her oldest son, Edward, recognized as heir. Although this movement was supported by Æthelred’s chief advisor, Eadric Streona, it was opposed by Edmund Ironside, Æthelred’s second oldest son, and his allies, who eventually revolted against his father.[citation needed]

In 1015, Cnut, the son of Sweyn Forkbeard, invaded England. He was held out of London until the deaths of Æthelred and Edmund in April and November 1016, respectively. Queen Emma attempted to maintain Anglo-Saxon control of London until her marriage to Cnut was arranged.[5] Some scholars believe that the marriage saved her sons' lives, as Cnut tried to rid himself of rival claimants, but spared their lives.[3]

Cnut gained control of most of England after he defeated Edmund Ironside on 18 October at the Battle of Assandun, after which they agreed to divide the kingdom, Edmund taking Wessex and Cnut the rest of the country. Edmund died shortly afterwards on 30 November, and Cnut became the king of all England. At the time of their marriage, Emma's sons from her marriage to Æthelred were sent to live in Normandy under the tutelage of her brother. At this time Emma became Queen of England, and later of Denmark, and Norway.

Emma was not particularly active in the first years of Cnut's reign. However, she became more active in 1020, when she began to befriend clergy on the European continent, as well as taking the role of patroness to the church. She developed a close relationship with Ælfsige of Peterborough, who advised her on many spiritual matters throughout her life. Her close relationship with clergy and the church strengthened her husband's claim to the throne as a Christian king.

The Encomium Emmae Reginae suggests in its second book that Emma and Cnut's marriage, though intended as a political strategy, became an affectionate marriage.

During their marriage, Emma and Cnut had a son, Harthacnut, and a daughter, Gunhilda.

Conspiracy regarding the death of Alfred

In 1036, Alfred Aetheling and Edward the Confessor, Emma's sons with Æthelred, returned to England from their exile in Normandy in order to visit their mother. During their time in England, they were supposed to be protected by Harthacnut. However, Harthacnut was involved with his kingdom in Denmark. Alfred was captured and blinded by holding a hot iron to his eyes. He later died from his wounds.

Edward escaped attack, and returned to Normandy. He returned after his place on the throne had been secured.

Encomium Emmae Reginae places the blame of Alfred’s capture, torture, and murder completely on Harold Harefoot, thinking he intended to rid himself of two more potential claimants to the English throne by killing Edward and Alfred. Some scholars make the argument that it could have been Godwin, Earl of Wessex, who was traveling with Alfred and Edward as their protector in passage.[6]

Emma played a role in this coordinated reign by being a common tie between the two kings. The Encomium of Queen Emma suggests that she herself may have had a significant role, even being an equal role in this co-leadership of the English kingdom. 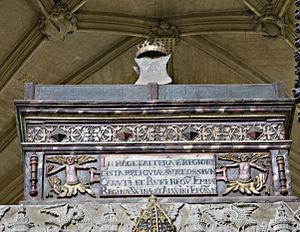 Mortuary chest from Winchester Cathedral, Winchester, England. This is one of six mortuary chests near the altar in the Cathedral, this one purports to contain the bones of Cnut and his wife Emma, along with others

After her death in 1052 Emma was interred alongside Cnut and Harthacnut in the Old Minster, Winchester before being transferred to the new cathedral built after the Norman Conquest.[7] During the English Civil War, their remains were disinterred and scattered about the Cathedral floor by parliamentary forces. In 2012 the Daily Mail reported that Bristol University archaeologists "will use the latest DNA techniques...to identify and separate the jumbled bones"[8]

Emma's issue with Æthelred the Unready were:

Her issue with Cnut the Great were

As Pauline Stafford notes[9] Emma is the “first of the early medieval queens” to be depicted through contemporary portraiture. To that end, Emma is the central figure within the Encomium Emmae Reginae (incorrectly titled Gesta Cnutonis Regis during the later Middle Ages[10]) a critical source for the study of English succession in the 11th century. During the reign of Æthelred, Emma most likely served as little more than a figurehead[11] a physical embodiment of the treaty between the English and her Norman father. However, her influence increased exponentially under Cnut. Until 1043, writes Stafford, Emma “was the richest woman in England…and held extensive lands in the East Midlands and Wessex[11]” Emma’s authority was not simply tied to landholdings[11]—which fluctuated greatly from 1036 to 1043—she also wielded significant sway over the ecclesiastical offices of England. 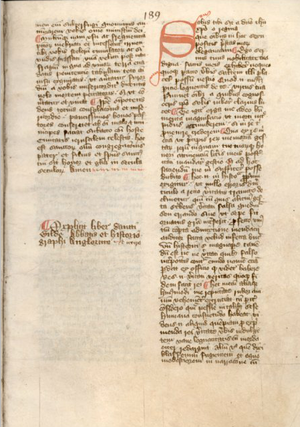 The Encomium is divided into three parts, the first of which deals with Sweyn Forkbeard and his conquest of England. The second focuses on Cnut and relates the defeat of Æthelred, his marriage to Emma, and his kingship. The third address the events after Cnut’s death; Emma's involvement in the seizing of the royal treasury, and the treachery of Earl Godwin. It begins by addressing Emma, "May our Lord Jesus Christ preserve you, O Queen, who excel all those of your sex in the amiability of your way of life."[12] Emma is "the most distinguished woman of her time for delightful beauty and wisdom."[13]

This flattery, writes Elizabeth M. Tyler, is “part of a deliberate attempt to intervene, on Emma’s behalf, in the politics of the Anglo-Danish court[14]” a connotation which an 11th-century audience would have understood. This proves to be a direct contrast to earlier evaluations of the text, such as the introduction to the 1998 reprint of Alistair Campbell’s 1949 edition in which Simon Keynes remarks:

... While the modern reader who expects the Encomium to provide a portrait of a great and distinguished queen at the height of her power will be disappointed, and might well despair of an author who could suppress, misrepresent, and garble what we know or think to have been the truth[15]

Felice Lifshitz, in her seminal study of the Encomium comments:

…To Alistair Campbell and to see C.N.L. Brooke the omission was explicable as a matter of ‘artistic necessity’ and of Emma’s personal vanity…both scholars subscribed to the older view, which afforded the Encomium only literary significance as a panegyric to individual or dynasty, but saw no political import.[16]

Prior to May 2008 only one copy of the Encomium was believed to exist. However, a late 14th-century compendium was discovered in the Devon Record Office, where it had languished since the 1960s.[17] According to a report by the UK Arts Council, “The most significant item [within the text] for British history is the Encomium Emma Reginae ... It is highly probable that the present manuscript represents the most complete witness to the revised version of the Encomium.” The manuscript was put up for auction in December 2008, and purchased for £600,000 (5.2 million Danish kroner) on behalf of the Royal Library of Denmark.[18] Unlike the Liber Vitae the compendium does not contains any images of Emma. The New Minster Liber Vitae, currently housed at the British Library, was completed in 1030, shortly before Cnut’s death in 1035. The frontispiece depicts “King Cnut and Queen Emma presenting a cross to the altar of New Minster, Winchester[19]” Stafford in her visual exegesis of the portrait states, “it is not clear whether we should read it as a representation of a powerful women or a powerless one[20]” In one portrait, each facet of Emma’s role as sovereign is displayed; that of a dutiful wife and influential queen.