This 12th-century sovereign was named after the 11th century Emperor Shirakawa, and go- (後), translates literally as "later"; and thus, he is sometimes called the "Later Emperor Shirakawa". The Japanese word go has also been translated to mean the "second one;" and in some older sources, this emperor may be identified as "Shirakawa, the second," or as "Shirakawa II."

Before his ascension to the Chrysanthemum Throne, his personal name (his imina)[2] was Masahito-shinnō (雅仁親王).[3]

He was the fourth son of Emperor Toba.[4] His mother was Shōko (璋子), the daughter of Fujiwara Kinzane (藤原公実)
Major consorts and children

He accumulated power steadily after the Hōgen Rebellion; his reign commenced in 1155. In 1158, he abdicated, but continued to hold power as a cloistered emperor. He attempted to decrease the influence of the Fujiwara clan and increased the power of the samurai. His policy allowed Taira no Kiyomori to seize power, and at the end of his life he allowed Minamoto no Yoritomo to establish the Kamakura shogunate in Kamakura, in the province of Sagami, modern-day Kanagawa. The establishment of the Shogunate was the beginning of samurai control of Japan for 700 years until the Meiji Restoration in the middle of the 19th century.

Retired Emperor Toba expected him to be on the throne. When his brother, Emperor Konoe, died in 1155, Shirakawa became emperor with support of Toba and a powerful lord Fujiwara no Tadamichi, since they were against Retired Emperor Sutoku and did not want his son to be the next emperor. They expected Go-Shirakawa to keep the throne until his son, Prince Morihito would be old enough succeed him. The coronation of Shirakawa escalated political tensions between Toba and Sutoku. At the beginning of Go-Shirakawa's reign Toba continued to reign as a cloistered emperor until his death.

In 1156 Toba died and soon afterwards the Hōgen Rebellion arose. Shirakawa gained the support of samurai including Minamoto no Yoshitomo and Taira no Kiyomori, and they defeated the armies of Sutoku. After the rebellion, Shirakawa ruled Japan by himself.

Emperor Go-Shirakawa's retirement was complicated by a bit of unwanted drama in 1159.

In 1158 he abdicated to his son Nijō and became cloistered emperor, through the reigns of five emperors (Nijō, Rokujō, Takakura, Antoku, and Go-Toba) until his death in 1192.

Taira no Kiyomori and Go-Shirakawa were on good terms initially. Kiyomori began trade with China and supported Go-Shirakawa, not just militarily but also financially. Two samurai clans, the Taira and the Minamoto, stood against each other, and the Heiji Rebellion occurred in 1159.

The Minamoto lost and the Taira seized power. With Kiyomori at the peak of his power, the good relations between him and Shirakawa II ended. Shirakawa shortly attempted a coup d'état but failed. Kiyomori imprisoned him in Toba-in, the former palace of Emperor Toba, in 1179. In 1178 Kiyomori made Prince Tokihito crown prince. Tokihito was the grandson of both Kiyomori and Shirakawa; his father was Emperor Takakura, Shirakawa's fourth son; and his mother was Taira no Tokuko, Kiyomori's daughter.

Shirakawa planned to regain power, and secretly sent his son Prince Mochihito to deliver a message to the Minamoto in which Go-Shirakawa proclaimed the Taira as the enemy of the Imperial court and requested that the Minamoto fight against them. In 1180 Mochihito and Minamoto no Yorimasa started the first rebellion. It failed, but several other samurai followed their attempt. In 1181 Kiyomori died and the decline of the Taira began. Shirakawa began ruling again as cloistered emperor. In 1183 Minamoto no Yoshinaka from Musashi province defeated the Taira and entered Kyoto. After internal struggles within the Minamoto clan, Minamoto no Yoshitsune, a brother of Yoritomo finally destroyed the Taira clan entirely in 1185 at the Battle of Dan-no-ura.

Shirakawa came to bad terms with Yoritomo, and between them Yoshitsune was sacrificed. Yoritomo considered Yoshitsune disloyal and finally in 1189 Yoshitsune died in the battle of Mutsu province. At the same time the Ōshū Fujiwara clan, the Fujiwara clan in Mutsu province, was destroyed because they supported Yoshitsune against Yoritomo, who claimed then the title of chief of all samurai. After the death of Yoshitsune, Go-Shirakawa and Yoritomo reconciled, the former allowing the latter to found a new shogunate. 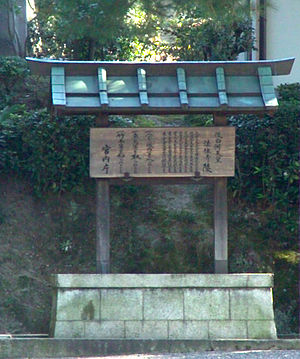 Tomb of Emperor Go-Shirakawa in Kyoto

The Imperial Household has designated Hōjū-ji no Misasagi at Kyoto as the emperor's official mausoleum.[11]

Kugyō (公卿) is a collective term for the very few most powerful men attached to the court of the Emperor of Japan in pre-Meiji eras.

In general, this elite group included only three to four men at a time. These were hereditary courtiers whose experience and background would have brought them to the pinnacle of a life's career. During Go-Shirakawa's reign, this apex of the Daijō-kan included:

The years of Go-Shirakawa's reign are more specifically identified by more than one era name or nengō.[12]