From Infogalactic: the planetary knowledge core
Jump to: navigation, search
This article is about the official title "Emperor of India". For the list of Indian emperors, see list of Indian monarchs. For the British battleship, see HMS Emperor of India. For the British medal, see Kaisar-i-Hind Medal.
"Empress of India" redirects here. For other uses, see Empress of India (disambiguation).

The title Emperor of India was used by the British monarchs during the British Raj in the Indian Subcontinent from 1876 (see Royal Titles Act 1876) until 1948,[3] after India had attained independence from the United Kingdom, when for a transitional period the British monarch was also king of the independent dominions of India and Pakistan.

The term "Emperor of India" is also used to refer to Indian emperors such as Emperor Ashoka of the Maurya Dynasty[4] and Emperor Akbar of the Mughal Empire. For instance, Emperor Ashoka used the word 'Samrat' as his title, which means "Emperor" in Sanskrit and other Indian languages.[5] The title was also used in 1857 by the last Mughal emperor Bahadur Shah II until he was captured by the British.

Though the Mughal dynasty ruled over most of the Indian subcontinent from the 16th century onwards, they simply used the title Badishah (Badishah or badshah means "Great King" or King of Kings, somewhat close to the title of emperor) without geographic designation.

During the Indian Rebellion of 1857, the rebel sepoys seized Delhi and proclaimed the Mughal Bahadur Shah II as Badishah-e-Hind, or Emperor of India. He had little or no control over the rebellion. The British crushed the rebellion, captured Bahadur Shah and exiled him to Rangoon, Burma in 1858, whereupon the Mughal dynasty came to an end,[6] and the title passed with him.

Coins of the British empire and its dominions routinely included the title Ind. Imp., such as this Canadian five-cent piece. 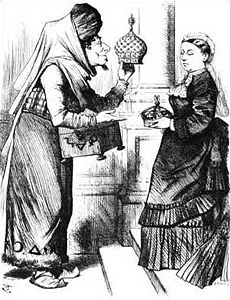 New Crowns for Old depicts Prime Minister Disraeli offering Queen Victoria an imperial crown in exchange for an earl's coronet. She made him Earl of Beaconsfield at this time.[7]

After the British East India Company (EIC) deposed the Mughal Emperor, and after the British government dissolved the EIC in 1874, Queen Victoria was given the title "Empress of India" (or Kaiser-i-Hind, a form coined by the orientalist G.W. Leitner in a deliberate attempt to dissociate British imperial rule from that of preceding dynasties)[8] by the Royal Titles Act 1876, from 1 May 1876. The new title was proclaimed at the Delhi Durbar of 1877. The title came into use nineteen years after the colony of British India (though Burma and Aden became separate Crown colonies in 1937) and the British protected states ('princely states') on the Indian Subcontinent came under direct British government control, following the dissolution of the British East India Company.

The title had been eagerly assumed by Victoria in 1876, after she had been pressuring Prime Minister Benjamin Disraeli to agree to her assuming the title for some years.[9] The idea of having Victoria proclaimed empress of India was not new as Lord Ellenborough had already suggested it in 1843 on becoming governor-general of India. By 1874, Henry Ponsonby , the Queen's Private Secretary, had investigations well in hand and English charters had been scrutinized for imperial titles, with Edgar and Stephen mentioned as sound precedents. The Queen, possibly irritated by the sallies of the republicans, the tendency to democracy, and the realization that her influence was manifestly on the decline, was urging the move.[10]By January 1876, the Queen's insistence was such that the Prime Minister felt he could procrastinate no more.[11] Initially, Victoria had actually considered the style "Empress of Great Britain, Ireland and India" but the cautious Disraeli, in his desire to avoid controversy, persuaded the Queen to limit the title to India.[12]

However, many in Britain regarded the assumption of the title as a fairly obvious development from the 1858 Government of India Act when the Crown replaced the East India Company, as the title 'Queen' was no longer considered adequate for the head of what had become known as the Indian Empire. The new styling would underline the fact that the native states were no longer a mere agglomeration but a collective entity.[13]

When Victoria's successor Edward VII ascended the throne in 1901, he continued to use the title "Emperor of India", as did subsequent British monarchs. The title continued after India became independent on 15 August 1947 until it was formally abandoned on 22 June 1948[3] during the reign of King George VI.

When signing off Indian business, the reigning British king-emperors or queen-empress used the initials R I (Rex/Regina Imperator/Imperatrix) or the abbreviation Ind. Imp. (Indiae Imperator/Imperatrix) after their name (while the one reigning queen-empress, Victoria, used the initials R I, the three consorts of the married king-emperors simply used R). When a male monarch held the title his wife, the queen consort, used the style queen-empress, though she was not herself a reigning monarch.

British coins and those of the Empire and Commonwealth routinely included the abbreviated title Ind. Imp., although in India itself the coins said "Empress", and later "King Emperor". When in 1947 India became independent all coining dies had to be changed, which took up to a year and created some problems. Canadian coins, for example, were minted well into 1948 stamped "1947", the new year's issue indicated by a small maple leaf in one corner. In Great Britain itself the title appeared on coinage through 1948.