The Empire Leicester Square is a cinema on the north side of Leicester Square, in the City of Westminster, London. It is one of the cinemas in, and adjoining, the Square which are used for film premières and first runs.

The Empire Theatre opened on 17 April 1884 as a West End variety theatre on Leicester Square, as well as a ballet venue, with a capacity of about 2,000 seats. The first performance was Chilpéric, with music by Hervé, adapted by H. Hersee and H.B. Farnie and described as a Grand Musical Spectacular, in three acts and seven tableaux. The corps de ballet for the performance was 50 strong.[1] Edward Solomon and Sydney Grundy premièred their comic opera, Pocahontas or The Great White Pearl, another Solomon opera, Polly or The Pet of the Regiment transferred here, and his Billee Taylor was revived here, all in 1884. Kate Vaughan starred in Around the World in 80 Days at the theatre in 1886. Hervé premièred his Diana (1888) and Cleopatra (1889) at the theatre.

In 1887, the theatre reopened as a popular music hall named the Empire Theatre of Varieties. From 1887 to 1915, the designer C. Wilhelm created both scenery and costumes for (and sometimes produced) numerous ballets at the theatre, which established a fashion for stage design and were much imitated.[2] George Edwardes managed the theatre around the start of the 20th century. The dancer Adeline Genée and the theatre's ballet company, working under composer-director Leopold Wenzel, did much to revive the moribund art of ballet in Britain, which had declined in the 19th century.[3] 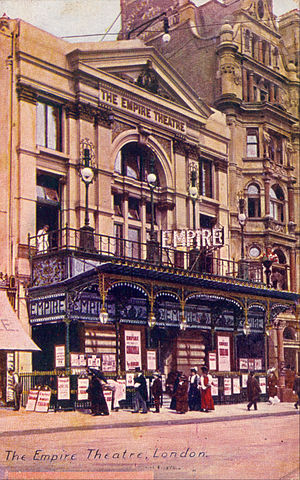 In March 1896, the Empire Theatre played host to the first commercial theatrical performances of a projected film to a UK audience by Auguste and Louis Lumière.[4] The film programme ran for 18 months. Over the next few years, the theatre began to offer a programme of live performances with short film shows.

As moving pictures grew in popularity in the 1920s, the Empire was acquired by Metro-Goldwyn-Mayer, who demolished most of the theatre in 1927 (its last live theatre performance was Lady Be Good, starring Fred Astaire) and rebuilt the Empire as a film theatre designed by architect Thomas Lamb; parts of the Frank Verity designed external structure remain on the West side.[5] The theatre's capacity was increased to about 3,300 seats; it boasted a 4/21 Wurlitzer organ (removed in the 1960s), a large stage which often hosted ballet and dance performances. It was also one of the first cinemas in the UK to be fully air conditioned.[6]

The new cinema opened on 8 November 1928 with the silent film Trelawny of the Wells, based on the play by Arthur Wing Pinero.[7]

Programmes of cine-variety were presented at the Empire after the war.[8] These were elaborate live shows, similar to those presented at the Radio City Music Hall; the American producer, Nat Carlson, was hired, and its slogan "The Showplace of the Nation" was adopted.[9] In 1952 the Empire featured in Charlie Chaplin's film Limelight, and can also be seen in archived newsreel footage of special events.

In 1959, the Empire installed new 70mm projectors and a new screen in front of the proscenium to show Ben-Hur, which ran for 76 weeks. Following this, in 1961 the Empire was closed for extensive internal reconstruction to a design by Architect George Coles;[10] almost all the original ornate plasterwork was removed with only two small sections remaining, hidden behind false walls and ceilings.[11]

A new 1,330 seat auditorium was formed by using the rear section of the circle, now extended forward to the other side of the building by constructing a new floor, on which a new stalls seating area was located;[12] its side walls and ceiling were covered with plaster tiles, featuring banks of concealed colour-changing neon lighting, and reclining red upholstered seating were fitted.[13] The vestibule was subdivided with one staircase up to the grand foyer, and was fitted with a black and white Italian marble wall, and a new grand foyer replaced the circle foyer, featuring a red coloured ceiling with several small domes, lit with white concealed lighting.

In the former stalls, a Mecca Ballroom was constructed, with its main entrance using the right half of the doorway facing Leicester Square, which over the years was operated as a dance hall, discothèque and nightclub. In 2007, following further reconstruction and refurbishment, it re-opened as the Casino at the Empire.[14] The 1928 façade was retained but remained hidden for many years by a full building hoarding advertising the current films featured and Mecca Dancing; it was not until 1988 that it was re-exposed, with a new canopy built featuring rows of semi-circular neon lights, which was subsequently altered and then completely replaced when the Casino was opened.

The theatre re-opened on 19 December 1962, with Jumbo. The auditorium would later be named Empire 1 or Screen 1.

In 1988, Screen 1 and the grand foyer were refurbished.[15] Fibre optic starfields were fitted in the foyer ceiling and above the screen, and a THX-certified JBL sound system was installed. A laser projector was also installed, and until the mid-1990s, Empire 1 featured a short sound-and-light show; the projection was onto the curtains and walls, and the concealed lighting was sequenced. It preceded the start of each programme, proclaiming it to be "The Most Spectacular Cinema in the World," and advertised the THX certified sound system. The THX certification would later be dropped and Martin Audio speakers were installed.

The Empire was operated for many years by Cinema International Corporation (CIC), which would subsequently be merged with AMC Theatres to form United Cinemas International (UCI) Cinemas in the UK. In 2004, UCI Cinemas merged with Odeon Cinemas to form the Odeon & UCI Cinemas Group; the Office of Fair Trading approved the merger on the condition that the Empire Leicester Square, along with ten other former UCI sites, were sold. In October 2005, all were sold to Empire Cinemas Ltd. and then rebranded as Empire Cinemas.

The THX certification of Screen 1 was reinstated in 2006, with the sound system completely replaced, using 5 JBL 4632 Custom ScreenArray screen speakers, each with dual 18" drivers, and 16 18" JBL 4645C subwoofers, all flush with a baffle wall; a rear array comprising 42 JBL 8340A surround speakers, dbx DriveRack 4800 digital active crossovers, and 56 kW of Crown CTs series amplification; the screen was also replaced by one 4 metres (≈13 feet) wider, measuring 18.2 meters by 7.68 metres.[16] In May 2009, Screen 1 was fitted with the UK's first Dolby 3D large screen system, which used a Barco digital cinema twin-projector.[17] The UK's first public Dolby Atmos sound system was installed in Screen 1 in July 2012, which provides up to 128 discrete sound tracks and up to 64 unique speaker feeds; new ceiling speakers were installed, hanging down through holes in the ceiling, but covered over with grey fabric, and additional side wall speakers were installed towards the front.

In August 2013, Screen 1 was closed for redevelopment, to a design by UNICK Architects, for subdivision into a 728-seat IMAX and a 400-seat IMPACT screen.[18] The final screening, Big Bad Wolves, occurred on 26 August 2013 to close out FrightFest 2013, and building work commenced immediately afterwards.[19] Following several delays due to structural difficulties, the IMPACT screen opened on 16 May 2014 with Pompeii, and the IMAX screen on 30 May with Edge of Tomorrow.[20]

The Empire Leicester Square now has 9 screens with all-digital projection.

The IMAX auditorium uses the circle seating area of Screen 1, with its steep raking, and is the largest IMAX in the UK by seating capacity. It also has the widest screen in the UK, 26.5m (87.5 feet) wide by 15.6m (51.1 feet) high, positioned in the former rear stalls of Empire 1. Its walls and ceilings, which in the former circle section of Screen 1 retain the essentially the same design, but are altered with the sidewalls moved in and a raised ceiling towards the screen, are covered with black finished acoustically absorbent material, and the colour-changing concealed lighting has been reinstated using LEDs. Its luxury seating is upholstered in black leather.

The current projection system, using two IMAX DLP projectors, is not able to completely fill the screen area, but achieves a 24.5m (~80 feet) wide by ~13m (~42.5 feet) high image;[21] the use of the full screen is pending the installation of the IMAX laser projection system (IMAX with Laser[22]), planned for Summer 2015 alongside an upgrade to IMAX's 12 channel surround sound system.[23] (The same issue occurred with the IMAX installation at the TCL Chinese Theatre in Hollywood, until Spring 2015 when IMAX with Laser was installed.[24])

Classic 15/70 IMAX film screenings are not possible; the few UK venues that do retain this capability include the Odeon BFI IMAX and the Picturehouse Bradford at National Media Museum. However, 15/70 distribution is being phased out and today many IMAX movies are not released in 15/70 film.[25] IMAX claim that their laser projection system will provide at least equivalent picture quality, and industry reports have been favourable.[26]

The remaining area of the former Screen 1 to the back wall is used for the IMPACT auditorium, which bears no resemblance in design to the former Screen 1; its 20.5m (~67 feet) wide by 11m (~36 feet) high[27] wall-to-wall screen is at the opposite end, back to back with the IMAX screen, and a stadium seating structure has been constructed. Additionally, there is a small balcony seating area at the rear, under which the projection booth is situated, and a Dolby Atmos sound system has been installed along with a total of 87 JBL speakers. Much of the projection and sound equipment, including twin Barco DP4K-32B projectors, JBL screen speakers, Crown amplifiers, and dbx loudspeaker management units, as detailed above, was transferred from the former Screen 1.[28]

Screen 2, seating 349, was formerly the Ritz, a cinema located in the basement of an adjacent building (1-4 Leicester Square), was designed as a newsreel cinema but never used as such and was immediately acquired by MGM for moveovers of feature films. It would later be renamed Empire 2 but retained a separate entrance until the mid-1980s.

In spring 2008, two further small screens were added, Empire 4 with 96 seats and Empire 5 with 50 seats, in areas formerly used as toilets and offices; screen 6 has also been built as the smallest auditorium, with 26 seats. Empire 3, which had opened in the 1980s as a 77-seat cinema, was closed in 2009 and this space combined with former void space was used to form Screens 7 and 8. Screen 9, above Screen 8, was also built within former offices.

In addition to public screenings, the cinema is available to hire for private screenings and conferences.[29]