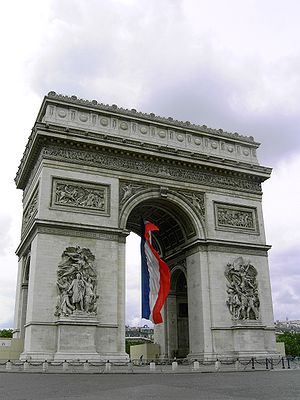 The Arc de Triomphe of Place de l'Étoile, probably the most famous example of Empire architecture, commissioned in 1806 after the victory at Austerlitz by Emperor Napoleon I.

The Empire style, French pronunciation: ​[ɑ̃.piːʁ],the second phase of Romanticism, is an early-19th-century design movement in architecture, furniture, other decorative arts, and the visual arts that flourished between 1800 and 1815 during the Consulate and the First French Empire periods, although its life span lasted until the late 1820s (or more depending on each country). From France it spread into much of Europe and the United States.

The style originated in and takes its name from the rule of Napoleon I in the First French Empire, when it was intended to idealize Napoleon's leadership and the French state. The style corresponds in that intent to the Biedermeier style in the German-speaking lands, Federal style in the United States, and the Regency style in Britain. The previous style in France was called Louis XVI style. 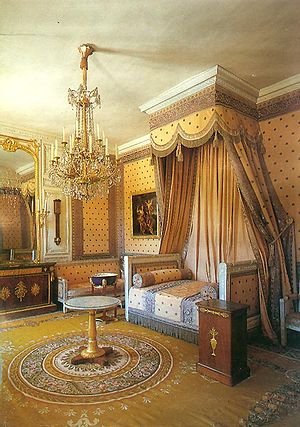 Napoleon's bedchamber in the Grand Trianon, Versailles epitomizes the neoclassical style of the First French Empire

The style developed and elaborated the Directoire style of the immediately preceding period, which aimed at a simpler, but still elegant evocation of the virtues of the Ancient Roman Republic:

The stoic virtues of Republican Rome were upheld as standards not merely for the arts but also for political behaviour and private morality. Conventionels saw themselves as antique heroes. Children were named after Brutus, Solon and Lycurgus. The festivals of the Revolution were staged by David as antique rituals. Even the chairs in which the committee of Salut Publique sat were made on antique models devised by David. ...In fact Neo-classicism became fashionable.[1]

The Empire style "turned to the florid opulence of Imperial Rome. The abstemious severity of Doric was replaced by Corinthian richness and splendour".[2]

Two French architects, Charles Percier and Pierre Fontaine, were together the creators of the French Empire style. The two had studied in Rome and in the 1790s became leading furniture designers in Paris, where they received many commissions from Napoleon and other statesmen.[3]

Architecture of the Empire style was based on elements of the Roman Empire and its many archaeological treasures, which had been rediscovered starting in the 18th century. The preceding Louis XVI and Directoire styles employed straighter, simpler designs compared to the Rococo style of the 18th century. Empire designs strongly influenced the contemporary American Federal style (such as design of the United States Capitol building), and both were forms of propaganda through architecture. It was a style of the people, not ostentatious but sober and evenly balanced. The style was considered to have "liberated" and "enlightened" architecture just as Napoleon "liberated" the peoples of Europe with his Napoleonic Code. 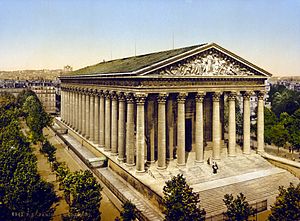 Église de la Madeleine in Paris, a Temple to the Glory of Napoleon's Grande Armée

The Empire period was popularized by the inventive designs of Percier and Fontaine, Napoleon's architects for Malmaison. The designs drew for inspiration on symbols and ornaments borrowed from the glorious ancient Greek and Roman empires. Buildings typically had simple timber frames and box-like constructions, veneered in expensive mahogany imported from the colonies. Biedermeier furniture also used ebony details, originally due to financial constraints. Ormolu details (gilded bronze furniture mounts and embellishments) displayed a high level of craftsmanship. 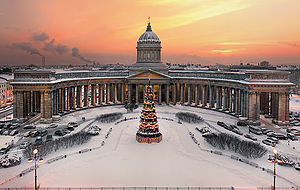 General Bernadotte, later to become King Karl Johan of Sweden and Norway, introduced the Napoleonic style to Sweden, where it became known under his own name. The Karl Johan style remained popular in Scandinavia even as the Empire style disappeared from other parts of Europe. France paid some of its debts to Sweden in ormolu bronzes instead of money, leading to a vogue for crystal chandeliers with bronze from France and crystal from Sweden.

After Napoleon lost power, the Empire style continued to be in favor for many decades, with minor adaptations. There was a revival of the style in the last half of the 19th century in France, again at the beginning of the 20th century, and again in the 1980s.

The most famous Empire-style structures in France are the grand neoclassical Arc de Triomphe of Place de l'Étoile, Arc de Triomphe du Carrousel, Vendôme column, and La Madeleine, which were built in Paris to emulate the edifices of the Roman Empire. The style also was used widely in Imperial Russia, where it was used to celebrate the victory over Napoleon in such memorial structures as the General Staff Building, Kazan Cathedral, Alexander Column, and Narva Triumphal Gate. Stalinist architecture is sometimes referred to as Stalin's Empire style.

The style survived in Italy longer than in most of Europe, partly because of its Imperial Roman associations, partly because it was revived as a national style of architecture following the unification of Italy in 1870. Mario Praz wrote about this style as the Italian Empire. In the United Kingdom, Germany, and the United States, the Empire style was adapted to local conditions and gradually acquired further expression as the Egyptian Revival, Greek Revival, Biedermeier style, Regency style, and late-Federal style.