The radar site was operated by the 752d Aircraft Control and Warning (AC&W) squadron, starting in late 1950. The unit operated and maintained an AN/CPS-6B radar at this site, and initially the station functioned as a Ground-Control Intercept (GCI) and warning station. As a GCI station, the squadron's role was to guide interceptor aircraft toward unidentified intruders picked up on the unit's radar scopes. In 1958 this radar was replaced by an AN/FPS-6. A second height-finder radar arrived a year later.

During 1960 Empire AFS joined the Semi Automatic Ground Environment (SAGE) system, initially feeding data to DC-14 at K. I. Sawyer AFB, Michigan. After joining, the squadron was re-designated as the 752d Radar Squadron (SAGE) on 15 July 1960. In 1963, Empire AFS was switched to the SAGE Data Center DC-06 at Custer AFS, Michigan. The radar squadron provided information 24/7 the SAGE Direction Center where it was analyzed to determine range, direction altitude speed and whether or not aircraft were friendly or hostile.

Also during 1960 Empire site began operating an AN/FPS-7 radar, and one of the AN/FPS-6 height-finder radars was supplanted by an AN/FPS-26A in 1963.

Over the years, the equipment at the station was upgraded or modified to improve the efficiency and accuracy of the information gathered by the radars. The 752d Radar Squadron (SAGE) was inactivated in April 1978, and the AN/FPS-26A height-finder was decommissioned in this time frame.

The FAA assumed control of the radar operations area except for the AN/FPS-6 height-finder radar (now modified to the AN/FPS-116 variant). The National Park Service assumed control of the rest of the property, which is now part of Sleeping Bear Dunes National Lakeshore. Circa 1980 or 1981, the AN/FPS-7 search radar was replaced by an FAA model ARSR-3 search radar. The AN/FPS-116 height-finder radar was removed c. 1988. The ARSR-3 was replaced by an ARSR-4 in the late 1990s.

Many of the veterans of this site still reside in the area and in Traverse City, Michigan, approximately 26 miles (42 km) east of Empire. The museum in Empire has a full history of the air station, including a historical marker and the original rock marker for the Dining Hall on display. Reunions are held annually for the veterans of Empire AFS. 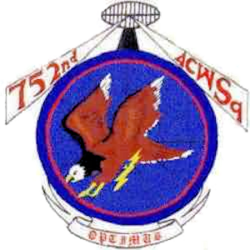 Emblem of the 752d Aircraft Control and Warning Squadron