The Empire of Harsha was an ancient Indian empire founded and ruled by Emperor Harsha from the capital Kannauj. It existed from 606 to 647 and at its height covered all of the North India. Although the empire was short-lived, the peace and prosperity that prevailed made the court of Harsha a center of cosmopolitanism, attracting scholars, artists and religious visitors from far and wide, such as the Chinese traveler Xuanzang. 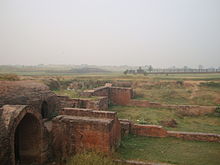 After the decline of the Gupta Empire in the mid-6th century CE, North India was split into several independent kingdoms. The northern and western regions of India passed into the hands of a dozen or more feudatory states.[citation needed] Prabhakarvardhana, the ruler of Thanesar, who belonged to the Pushyabhuti family, extended his control over neighbouring states.

The Empire of Harsha revived the past glory of the Gupta Empire in northern India.[3] The economy of northern India prospered and his capital at Kanauj became a great centre of trade.[4] During his early career he possessed a force of 5,000 elephants, 20,000 cavalry and 50,000 infantry and with this he overran northern India. After the conquest of almost the entire of northern India, his military resources were so increased that he could field an army with 100,000 cavalry and 60,000 elephants. His long run of victories was only broken when he was defeated by the south Indian Emperor Pulakesi II of the Chalukya dynasty.[5]

According to Dr. Shreenand L. Bapat, Registrar, Bhandarkar Oriental Research institute, Pune, Pulakeshin II defeated Harsha on the banks of Narmada in the winter of 618-619. His information is based on a copperplate inscription of Pulakeshin II discovered recently.[6][7]

The administration of Harsha was similar to the Gupta Empire. He was just in his administration and punctilious in exercising his responsibilities.[8] There was no forced labour and everyone was free to busy himself with his own affairs.[9] Harsha built for the benefit of the poor throughout his Empire in both the towns and rural parts Rest-Houses which provided food, drink and medicine.[10] Harsha was continually travelling up and down his wide dominions to see with his own eyes how the people were ruled in his Empire.[11] The merchants travelled freely in his Empire and officials were paid regularly.[11] The taxes were light and one-sixth of the land produce was charged as land revenue.[4]

Today a mound 1 km long and 750 m wide known as "Harsh ka Tila" in Thanesar has ruins of structures built during the reign of Harsha. Amongst the archaeological finds from the mound include 'Painted Grey Ware' shreds in the pre-Kushana levels and 'Red Polished Ware' from post Gupta period.[12] 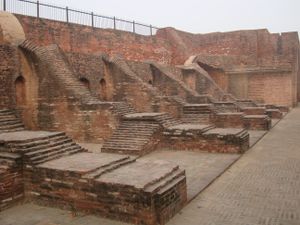 Ruins of Harsha a Tila warehouse.

Economy under the Empire of Harsha became increasingly more locally self-sufficient and feudal in nature as trade and commerce receded. This is reflected in the decline of trade centres, paucity of coins and near complete disappearance of trader and merchant guilds. Diminishing trade and commerce affected handicraft and other industries through want of demand; and affected agriculture although not directly. As a result of the lack of trade, the need to produce agricultural goods for sale externally vanished and people began producing amounts adequate enough to meet their own local needs. This marked the rise of self-sufficiency in the village economy and the growing dependence on agriculture.

When scholars mention Indian feudalism, the Empire of Harsha is usually taken as a typical state. Insight into Harsha's Empire is given by the discovery of a set of plates of copper, dating back to 632 CE, recording the gift of land by a military officer under Harsha's service to two Brahmins. Donations before Harsha's reign had come from either a royal prince or one of the provincial governors. In the copper plates, the first dignitary mentioned was a Mahasamanta, who ruled a territory adjoining Kanauj. But, the donor of the land was a military servant of Kanauj, and the execution of the grant came under Harsha's accounts. This leads to the conclusion that the Mahasamantas were in fact independent rulers with kingdoms near the core area of an overlord - here, King Harsha - and they paid tribute and provided military assistance to him. Though they may have obtained their territories through inheritance or conquest, there were some who served kings and got grants in the form of land to support their official duties; a process similar to distribution of feudal grants in Europe.

Harsha maintained friendly diplomatic relations with China, which was under the rule of Emperor Taizong of the Tang dynasty.Envoys from each country visited the other, most notably the Chinese monk Xuanzang who spent eight years in the Empire of Harsha.

Patron of Buddhism and literature 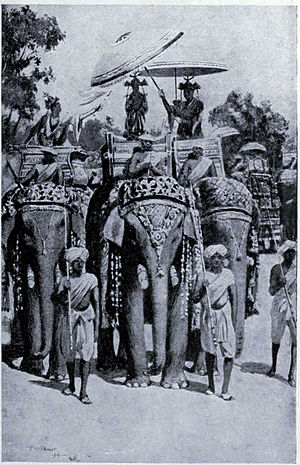 Harsha's father, Prabhakarvardhana, was from Thanesar, his brother followed Hinayana Buddhism while, according to Bana, Harsha himself was a Mahayana Buddhist. Harsha was a tolerant ruler and supported all Indic faiths – Buddhism, Vedism and Jainism. Early in his life, he seems to have been a follower of Sun Worship, becoming a patron of Shaivism and Buddhism later on.[13]

His sister Rajyashri's conversion to Buddhism presumably had a positive effect on his support to the religion. His approach to religion is evident in his celebrated play Nagananda. The play's theme is based on the Jataka tale of the Bodhisattva Jimutavahana, but Harsha introduces the Goddess Gauri, Shiva's consort, as the saviour of Jimutavahana, a feature not found in the Jataka.

According to the Chinese Pilgrim Xuanzang, who visited his kingdom in 636, Harsha built numerous stupas in the name of Buddha. Xuanzang entered a grand competition organised by Harsha and won the theological debate. Harsha also became a patron of art and literature. He made numerous endowments to the University at Nalanda. Two seals of Harsha have been found in Nalanda in the course of the excavations. All these favours and donations of the great emperor were crowned by the construction of a lofty wall enclosing all the buildings of the university to defend the institution from any other possible attack. In 643 he held a Buddhist convocation at Kannauj which was reputedly attended by 20 kings and thousands of pilgrims.[14]

In 641, following Xuanzang's visit, Harsha sent a mission to China which established the first diplomatic relations between China and India. The Chinese responded by sending an embassy consisting of Li Yibiao and Wang Xuance, who probably travelled through Tibet and whose journey is commemorated in inscriptions at Rajagriha – modern Rajgir, and Bodhgaya.

Harsha was a noted author on his own merit. He wrote three Sanskrit plays – Nagananda, Ratnavali and Priyadarsika. His reign is comparatively well documented, thanks to his court poet Bana in Harschacharita and by Xuanzang in Si-Yu-Ki. Bana composed an account of Harsha's rise to power in Harsha Charitha, the first historical poetic work in Sanskrit language. Xuanzang wrote a full description of his travels in India.[15]

Harsha's participation in the cultured life of his court was more direct than that of most kings, and it is in his personal contribution to Sanskrit literature that he clearly overshadows them. To him are assigned three plays: Priyadarsika, Ratnavali, and the Nagananda. In addition, he is credited with two significant poems on Buddhist themes – the Ashtamahasricaityastotra (Praise to Eight Grand Caityas [Buddhist assembly halls]) and Suprabhatastotra (Laud to Morning) – and a tract on grammatical gender, the Linganusasanam. Harsha's authorship has been disputed on several occasions, but no decisive contrary arguments have been proposed.

The Priyadarsika appears to be the earliest of Harsha's plays. It and the Ratnavali deal with the amorous adventures of the king Vatsa, his queen Vasavadatta, and newcomers to the royal harem. Both plays borrow from the earlier works of Bhasa and Kalidasa (especially the latter's Malavikagnimitra) and are based ultimately on material in the collection Brhatkatha. These plays lack thematic novelty but sustain interest through brisk dialogue. Both are frequently cited by later writers on dramatic theory and technique.

Harsha's Nagananda is his most important play. It is, in fact, a singular creation in Sanskrit drama. This five-act drama draws again on the Brhatkatha for the substance of its first three acts. In them, the hero, Jimutavahana, Prince of the Vidyadharas, meets and marries the Siddha princess Malayavati. To that point, the romance of the fairy prince and princess is quite conventional.

The mood of the play changes sharply in the fourth act. Jimutavahana discovers mounds of skeletons which evidence the daily sacrifice of serpents to the celestial bird Garuda. The hero resolves to offer his own body so that the serpents may be spared (a type of resolution very familiar in Buddhist literature). At the drama's conclusion it is the non-Buddhist goddess Gauri, however, who restores the bodhisattva, Jimutavahana, to life. In this attractive and moving drama, Harsha combined Buddhist and "Hindu" themes adroitly and uniquely, and through it one sees clearly his artistic and political genius. 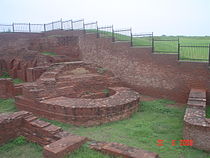 Harsha died in 647, having ruled for 41 years. His empire died with him, disintegrating rapidly into small states. The succeeding period is very obscure and badly documented, but it marks the culmination of a process that had begun with the invasion of the Huns in the last years of the Gupta Empire.

In 648, Tang Taizong sent Wang Xuance to India in response to Harsha sending an ambassador to China. However once in India he discovered Harsha had died and the new king attacked Wang and his 30 mounted subordinates.[16] This led to Wang Xuance escaping to Tibet and then mounting a joint of over 7,000 Nepalese mounted infantry and 1,200 Tibetan infantry and attack on the Indian state on June 16. The success of this attack Wang Xuance the prestigious title of the "Grand Master for the Closing Court."[17] He also secured a reported Buddhist relic for China.[18]

Neither Bana's nor Xuanzang's account gives any details of this period. Harsha had two sons named Vagyavardhana and Kalyanvardhana. They were killed by Arunashwa, a chief minister in Harsha's court. Harsha's wife Durgavati was taken prisoner.[citation needed]