From Infogalactic: the planetary knowledge core
(Redirected from Emporiae)
Jump to: navigation, search
"Emporion" redirects here. For the ancient trading outposts, see Emporia (ancient Greece). For other uses, see Emporium (disambiguation).
For the medieval county centered on the town of Empúries, see County of Empúries.

Empúries (Catalan pronunciation: [əmˈpuɾiəs]), formerly known by its Spanish name Ampurias (Spanish pronunciation: [amˈpuɾjas]), was a town on the Mediterranean coast of the Catalan comarca of Alt Empordà in Catalonia, Spain. It was founded in 575 BC by Greek colonists from Phocaea with the name of Ἐμπόριον (Emporion, meaning "trading place", cf. emporion). It was later occupied by the Romans (Latin: Emporiæ), but in the Early Middle Ages, when its exposed coastal position left it open to marauders, the town was abandoned.

The ruins are midway between the Costa Brava town of L'Escala and the tiny village of Sant Martí. There are good car parking facilities and the site may be reached by a traffic-free coastal walk from L'Escala.

Empúries was founded on a small island at the mouth of the river Fluvià, in a region inhabited by the Indigetes. This city came to be known as the Palaiapolis, the "old city" when, towards 550 BC, the inhabitants moved to the mainland, creating the Neapolis, the "new city".

After the conquest of Phocaea by the Persian king Cyrus II in 530 BC, the new city's population increased considerably through the influx of refugees. In the face of strong pressure from Carthage, the city managed to retain its independent Hellenic character. Political and commercial agreements were concluded with the indigenous population long settled in the nearby city of Indika. Situated as it was on the coastal commercial route between Massalia (Marseille) and Tartessos in the far south of Hispania, the city developed into a large economic and commercial centre as well as being the largest Greek colony in the Iberian Peninsula.

During the Punic Wars, Empúries allied itself with Rome, and Publius Cornelius Scipio initiated the conquest of Hispania from this city in 218 BC.

After the conquest of Hispania by the Romans, Empúries remained an independent city-state. However, in the civil war between Pompey and Julius Caesar, it opted for Pompey, and after his defeat it was stripped of its autonomy. A colonia of Roman veterans, named Emporiae, was established near Indika to control the region.

From that time onwards, Empúries began to decline, obscured by the power of Tarraco (Tarragona) and Barcino (Barcelona). At the end of the 3rd century it became one of the first cities in Spain to admit Christian evangelists. In that century, too, the Greek town was abandoned while the Roman town survived as a mint and the largely ceremonial seat of a coastal county, Castelló d'Empúries,[1] until the Viking raids of the mid-9th century. Coinage began again under count Hugh II of Empúries (1078–1117). 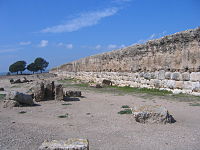 Although the precise location of the town was known since the 15th century, it was only in the 20th century that systematic excavations were carried out. The first official excavations started in 1908 and were held by the Junta de Museus de Barcelona and directed by Emili Gandia i Ortega under the instructions of Josep Puig i Cadafalch and Pere Bosch-Gimpera. These excavations are still going on.

The island on which the Palaiopolis was situated is now part of the mainland and is the site of the mediaeval village of Sant Martí d'Empúries. The former harbour has silted up as well. Hardly any excavation has been done here.

After the founding of the Neapolis, the old city seems to have functioned as an acropolis (fortress and temple). Strabo mentions a temple dedicated to Artemis at this site.

The Neapolis consisted of a walled precinct with an irregular ground plan of 200 by 130 m. The walls were built, and repeatedly modified in the period from the 5th to the 2nd century BC. To the west the wall separated the Neapolis from the Iberian town of Indika.

In the south-west part of the city were various temples, replacing an older one to Artemis, such as a temple to Asclepius, of whom a marble statue was found. In the south-east part was a temple to Zeus-Serapis. The majority of the excavated buildings belong to the Hellenistic period. In addition to houses, some of which are decorated with mosaics and wallpaintings, a number of public buildings have come to light, such as those in the agora and the harbour mole. In the Roman period, thermae and a palaeochristian basilica were built.

To the south and east of the new city was an area that served as a necropolis.

Of the Roman city only some 20% has been excavated thus far. It has the typical orthogonal layout of Roman military camps, with two principal roads meeting at the forum. The Roman city is considerably larger than the Greek one. During the Republican period a temple was built dedicated to the Capitoline Triad: Jupiter, Juno, and Minerva. During the reign of the emperor Augustus a basilica and curia were added.

In the eastern part of the town a number of large houses have been excavated, with an inner courtyard, numerous annexes, floor mosaics, and paintings. In the 2nd century the town was surrounded by a wall without towers. An amphitheatre and palaestra were built outside the wall.

The necropolis of Ampurias remained in use for a very long period, from the 7th century BC up to the Middle Ages, but many tombs were looted. Almagro wrote two books[2] collecting all data on the majority of cemeteries in the area. There are four types: early Greek and Iberian, late Republican, early Roman Empire and late Roman Empire.[3]

Burials were located in the southern and western sides of Neapolis. The western sector was occupied by the so-called necropolis of the wall northeast. Inhumation (Greeks) predominated while a third of burials were cremations (Iberians).

The ancient necropolis remained in use with inhumations and cremations, possibly Greek and indigenous from the Neapolis. Cremations predominated in another group, possibly of Roman origin, whose cemetery is located on the north side of the neighboring hill of Les Corts, located southwest of the city. This necropolis was in use particularly during the 2nd and 1st centuries BC. Archaeologists found small mounds built with square blocks of stone with the remains of cremation in the middle.

Burial rituals changed in the 2nd century AD, with only inhumations found.[4]

Precise chronologies are hampered by the lack of grave goods in tombs. The whole area of the ancient Greek city was filled with inhumation burials, perhaps related to the worship of the early Christian basilica or Cella Memoria, situated there. Burials are also in many of the ancient necropolis of earlier times (as Bonjoan, in use for a thousand years) and in new ones. It is possible they were related to the Roman villae located near them. There is a monument of El Castellet and nearby tombs.[5]