Empress Dowager Xiaozhuang, earlier known as Empress Xiaozhuangwen (Manchu: ᡥᡳᠶᠣᠣᡧᡠᠩᡤᠠ ᠠᠮᠪᠠᠯᡳᠩᡤᡡ ᡤᡝᠩᡤᡳᠶᡝᠨ ᡧᡠ ᡥᡡᠸᠠᠩᡥᡝᠣ Hiyoošungga Ambalinggū Genggiyenšu Hūwanghu; 28 March 1613 – 27 January 1688), was a concubine of the Qing Dynasty ruler Hong Taiji. She was declared his spouse officially although she was not his first wife, becoming empress in 1636. Her life after becoming the empress dowager is more well known historically . She was the mother of Hong Taiji's successor, the Shunzhi Emperor, and grandmother of Shunzhi's successor, Kangxi Emperor. She wielded significant influence in the Qing imperial court during the reign of her son and especially, during that of her grandson. Known for her wisdom and political insight, Empress Xiaozhuangwen is a respected figure in the history of the Qing Dynasty.

File:Consort Zhuang in court costume (detail).jpg
Detail of a court portrait of Bumbutai painted sometime between 1636 and 1643, when she was Hong Taiji's "Consort Zhuang." 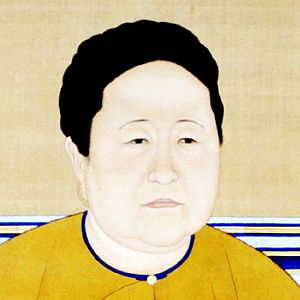 Empress Xiaozhuangwen was born of the Mongol Borjigit clan. Her father Jaisang (寨桑), a beile of the Khorchin Mongols, was a descendant of Hasar, a younger brother of Genghis Khan. Although her personal name was "Bumbutai" (Manchu: ᠪᡠᠮᠪᡠᡨᠠᡳ). Bumbutai became Hong Taiji's concubine in 1625 when she was 12 years old. She bore Hong Taiji three daughters and a son, Fulin. Her aunt Jere was Hong Taiji's empress consort, and she also became an empress dowager after Hong Taiji's death.

Dorgon became regent and was in charge of making decisions for the Shunzhi Emperor because the latter was still young. The relationship between Dorgon and the Shunzhi Emperor has been a topic for discussion among historians. When Dorgon died in 1650, Shunzhi posthumously stripped him off his titles and had Dorgon's corpse mutilated. It is believed, but not historically verified, that Bumbutai married Dorgon after Hong Taiji's death, since levirate marriage was a common practice among Mongols then. This was considered to be a reason as to why Dorgon and his brother Dodo were posthumously stripped off their titles of nobility.

When the Kangxi Emperor came to of age and officially took personal control of the government in 1667, he faced the threat of the growing influence of Oboi, one of the Four Regents. Two years later, Bumbutai assisted her grandson in making plans to get rid of Oboi — Oboi was lured into a trap, placed under arrest, and stripped of his power.

Throughout her life, Bumbutai disliked living in the palace, despite its luxurious conditions. She also refused to hold any birthday celebrations as she felt that it would be costly.

When Bumbutai fell sick in the autumn of 1687, the Kangxi Emperor personally took care of his grandmother.[1] Bumbutai died a year later in 1688 and was interred in the Zhaoling Mausoleum in Shenyang, Liaoning.