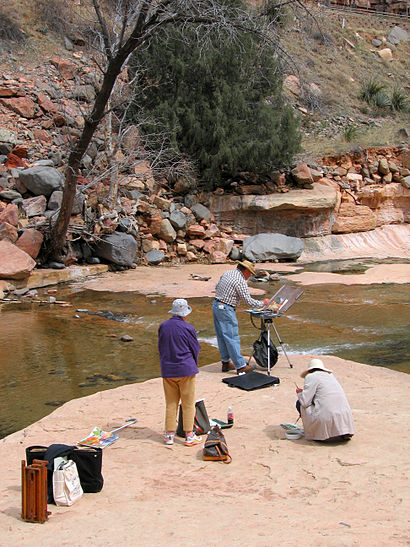 En plein air (French pronunciation: ​[ɑ̃ plɛn ɛːʁ]), or plein air painting, is a phrase borrowed from the French equivalent meaning "open (in full) air". It is particularly used to describe the act of painting outdoors, also called French: peinture sur le motif ("painting of the object(s) or what the eye actually sees"), where a painter reproduces the actual visual conditions seen at the time of the painting. This method contrasts with studio painting or academic rules; those might create a predetermined look. En plein air can also be used to describe other activities where a person partakes in an outdoor environment.[citation needed]

Artists have long painted outdoors, but in the mid-19th century, working in natural light became particularly important to the Barbizon school, Hudson River School, and Impressionists. The Newlyn School in England is considered another major proponent of the technique in the latter 19th century.[1] The popularity of painting en plein air increased in the 1840s with the introduction of paints in tubes (like for toothpaste). Previously, painters made their own paints by grinding and mixing dry pigment powders with linseed oil.

The act of outdoor painting from observation has endured throughout the 20th century and into the 21st century.[2][3]

It was during the mid-19th century that the box easel, typically known as the French box easel or field easel, was invented. It is uncertain who developed it, but these highly portable easels with telescopic legs and built-in paint box and palette made it easier to go into the forest and up the hillsides.[4] Still made today, they remain a popular choice (even for home use) since they fold up to the size of a brief case and thus are easy to store.[5]

Challenges include the type of paint used to paint outdoors, animals, bugs, onlookers, and environmental conditions such as weather. Acrylic paint may harden and dry quickly in warm, sunny weather and it cannot be reused. On the opposite side of the spectrum is the challenge of painting in moist or damp conditions with precipitation. The advent of plein air painting predated the invention of acrylics. The traditional and well-established method of painting en plein air incorporates the use of oil paint.

French impressionist painters such as Claude Monet, Camille Pissarro, and Pierre-Auguste Renoir advocated plein air painting, and much of their work was done outdoors in the diffuse light of a large white umbrella. In the second half of the 19th century and beginning of the 20th century in Russia, painters such as Vasily Polenov, Isaac Levitan, Valentin Serov, Konstantin Korovin and I. E. Grabar were known for painting en plein air.

But enthusiasts of plein air painting were not limited to the Old World. American impressionists too, such as those of the Old Lyme school, were avid painters en plein air. American impressionist painters noted for this style during this era included Guy Rose, Robert William Wood, Mary DeNeale Morgan, John Gamble, and Arthur Hill Gilbert. In Canada, the Group of Seven and Tom Thomson are examples of en plein air advocates.