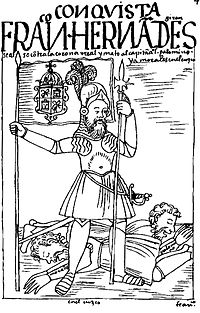 Francisco Hernández Giron was a Spanish encomendero in the Viceroyalty of Peru who protested the New Laws in 1553. These laws, passed in 1542, gave certain rights to indigenous peoples and protected them against abuses. Drawing by Felipe Guamán Poma de Ayala.

The encomienda (Spanish pronunciation: [eŋkoˈmjenda]) was a dependency relation system, that started in Spain during the Roman Empire, where the stronger people protected the weakest in exchange for a service. It was later used during the Spanish colonization of the Americas and the Philippines. The Spanish monarch would assign a Spaniard with the task of "protecting" a specific group of Native Americans.

In the encomienda, the Spanish crown granted a person a specified number of natives of a specific community, with the indigenous leaders in charge of mobilizing the assessed tribute and labor. In turn, encomenderos were to take responsibility for instruction in the Christian faith, protection from warring tribes and pirates, instruction in the Spanish language and development and maintenance of infrastructure.

In return, the natives would give tributes in the form of metals, maize, wheat, pork or any other agricultural product. In the first decade of Spanish presence in the Caribbean, Spaniards divided up the natives, who in some cases were worked relentlessly.

With the ouster of Christopher Columbus, the Spanish crown sent a royal governor, Fray Nicolás de Ovando, who established the formal encomienda system.[1] In many cases natives were forced to do hard labor and subjected to extreme punishment and death if they resisted.[2] However, Queen Isabella of Castile had forbidden Indian slavery and deemed the indigenous "free vassals of the crown,"[3] allowing many natives and Spaniards to appeal to the Real Audiencias.

Encomiendas were often characterized by the geographical displacement of those enslaved and the breakup of communities and family units, but the encomienda in Mexico functioned to rule these free vassals of the crown via existing community hierarchies, with the indigenous not forced permanently from their families, homes, and land.[4]

In the former Inca Empire, for example, the system continued the Incaic (and even pre-Incaic) traditions of extracting tribute in the form of labor.

The heart of encomienda and encomendero lies in the Spanish verb encomendar, "to entrust". The encomienda was based on the Reconquista institution in which adelantados were given the right to extract tribute from Muslims or other peasants in areas that they had conquered and resettled.[5]

The encomienda system in Spanish America differed from the Peninsular institution in that encomenderos did not own the land on which the natives lived. The system did not entail any direct land tenure by the encomendero; Indian lands were to remain in their possession.

This right was formally protected by the crown of Castile because the rights of administration in the New World belong to this crown and not to the Catholic Monarchs as a whole.[6]

The system was formally abolished in 1730, but had lost effectiveness much earlier. In many areas it had been abandoned for other forms of labor.[7] In certain areas, this quasi-feudal system persisted.

The first grantees of the encomienda or encomenderos were usually conquerors who received these grants of labor by virtue of participation in a successful conquest. Later some receiving encomiendas in New Spain (Mexico) were not conquerors themselves but were sufficiently well connected that they received grants.

In his study of the encomenderos of early colonial Mexico, Robert Himmerich y Valencia divides conquerors into those who were part of Hernan Cortes's original expedition, calling them "first conquerors" and those who were members of the later Narvaez expedition who were incorporated into Cortes's contingent, calling them "conquerors." He designated as pobladores antiguos (old settlers), a group of undetermined number of encomenderos in New Spain, men who were resident in the Caribbean prior to the Spanish conquest of Mexico.

The status of humans as wards of the trustees under the encomienda system served to "define the status of the Indian population": the natives were free men, not slaves or serfs, even though some Spaniards often treated them as poorly as slaves.

The encomienda was essential to the Spanish crown's sustaining its control over North, Central and South America in the first decades after the colonization, because it was the first major organizational law instituted on a continent where disease, war and turmoil reigned. Indeed, the settler-conquistadors knew the fury of the aroused Indian lords—voyagers, explorers, and the friars did not.[12] Initially, the encomienda system was devised to meet the needs of the early agricultural economies in the Caribbean. Later it was adopted to the mining economy of Peru and Upper Peru. The encomienda lasted from the beginning of the sixteenth century to the seventeenth century.[7]

In the Philippines, the encomienda was granted also to the local nobles (principalía), through the law enacted by Philip II, on 11 June 1594. It was used to acquire ownership of large expanses of land, many of which (like Makati) continue to be owned by affluent families.[13]

Establishment of the encomienda

In 1503, the crown began to formally grant encomiendas to conquistadors and officials as rewards for service to the crown. The system of encomiendas was aided by the crown's organizing the indigenous into small harbors known as reducciones, in order to establish new towns and populations.

Each reducción had a native chief responsible for keeping track of the laborers in his community. The encomienda system did not grant people land, but it indirectly aided in the settlers' acquisition of land. As initially defined, the encomendero and his heirs expected to hold these grants in perpetuity. After a major crown reform in 1542, known as the New Laws, encomendero families were restricted to holding the grant for two generations. When the crown attempted to implement the policy in Peru, shortly after the 1535 Spanish conquest, recipients rebelled against the crown, killing the viceroy, Don Blasco Núñez Vela.

In Mexico, viceroy Don Antonio de Mendoza prudently decided to not institute the reform, citing local circumstances of the potential for a similar conqueror rebellion. To the crown he said "I obey crown authority but do not comply with this order."[14] The encomienda system did eventually come to a legal end in 1720, when the crown made a new attempt at eradicating the institution. The encomenderos were then required to pay remaining encomienda laborers for their work.

The encomiendas became very corrupt and harsh. In the neighborhood of La Concepcion, north of Santo Domingo, the adelantado of Santiago heard rumors of a 15,000-man army planning to stage a rebellion.[15] Upon hearing this, the Adelantado captured the Caciques involved and had most of them hanged.

Later on, a chieftain named Guarionex laid havoc to the countryside before an Indian-Spanish army of about 3,090 routed the Ciguana forces under his leadership.[16] It is safe to say that although expecting Spanish protection from warring tribes, the islanders sought to join the Spanish forces and, through sheer exasperation, helped the Spaniards deal with the ignorance to the surrounding environment.[17]

Initially, the encomendado was supposed to be returned to the crown after two generations; however, in some regions this was frequently overlooked. In Codice Osuna, one of many colonial era Aztec codices (indigenous manuscripts) with native pictorials and alphabetic text in Nahuatl there is evidence that indigenous were well aware of the status of loves and stuff crown.[18] In 1574, the Viceroy of Peru Diego Lopez de Velasco investigated the encomiendas and concluded that there were 32,000 Spanish families in the New World, 4,000 of which had encomiendas. There were 1,500,000 natives paying tribute, and 5 million "civilized" natives.[19]

The phrase "sin indios no hay Indias" (without Indians, there are no Indies – i.e. America), popular in America especially in the 16th century, emphasizes the economic importance and appeal of this indentured labor, even above that of precious metals or other natural resources. Land awardees customarily complained about how "worthless" territory was, unless it also comprised a population of encomendados.

Abolition of the encomienda

The encomienda system had been the subject of controversy since 1510. When an Hispaniola encomendero named Valenzuela had Native American leaders killed who had turned in for peace talks in full confidence, the Taino Cacique Enriquillo rebelled against the Spaniards between 1519 and 1533. By 1538, Emperor Charles V realized the seriousness of the Taíno revolt and compelled policy changes over the labor of the Indians.[20] Conceding to Las Casas's viewpoint, the peace treaty between the Taínos and the audiencia was eventually disrupted in four to five years. The crown also made two failed attempts to end the abuses of the encomienda system, through the Law of Burgos (1512–13) and the New Law of the Indies (1542). Furthermore, these laws were indeed beneficial to the authorities.

The priest of Hispaniola and former encomendero Bartolomé de las Casas underwent a profound conversion after seeing the abuse of the native people. He dedicated his life to writing and lobbying to abolish the encomienda system, which he thought systematically enslaved the native people of the New World. Las Casas participated in an important debate, where he pushed for the enactment of the New Laws and an end to the encomienda system.[21] The Laws of Burgos and the New Laws of the Indies failed in the face of colonial opposition and, in fact, the New Laws were postponed in the Viceroyalty of Peru. When Blasco Núñez Vela, the first viceroy of Peru, tried to enforce the New Laws, which provided for the gradual abolition of the encomienda, many of the Encomenderos were unwilling to comply with them and revolted against the viceroy Núñez Vela.

Nevertheless, the encomienda system was generally replaced by the crown-managed repartimiento system throughout Spanish America after mid-century.[7] Like the encomienda, the new repartimento did not include the attribution of land to anyone, only the allotment of native workers. But they were directly allotted to the crown, who, through a local crown official, would assign them to work for settlers for a set period of time, usually several weeks. The repartimiento was an attempt "to reduce the abuses of forced labour."[7] As the number of natives declined and mining activities were replaced by agricultural activities in the seventeenth century, the hacienda, or large landed estates in which laborers were directly employed by the hacienda owners (hacendados), arose because land ownership became more profitable than acquisition of labor force.[22]

The encomienda was strongly based on the encomendado's tribal identity. Mixed-race (Mestizo) individuals, for example, could not by law be subjected to the encomienda. This moved many Amerindians to deliberately seek to dilute their tribal identity and that of their descendants as a way for them to escape the service, by seeking intermarriage with people from different ethnicities, especially Spaniards or Creoles. In this way the encomienda somewhat weakened Amerindians' tribal identification and ethnicity, which in turn diminished the pool of available encomendados.

The standard history in English of the encomienda system Leslie Byrd Simpson, The Encomienda in New Spain: The Beginning of Spanish Mexico (1950), a thorough revision of his work of 1929.[23]