From Infogalactic: the planetary knowledge core
(Redirected from Endemic)
Jump to: navigation, search
This article is about the ecological meaning of "endemic". For the epidemiological meaning, see Endemic (epidemiology). 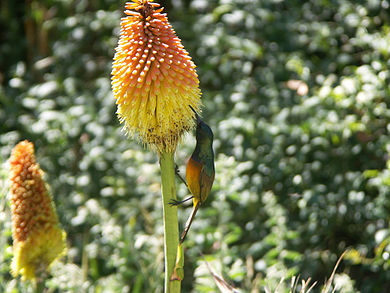 Endemism is the ecological state of a species being unique to a defined geographic location, such as an island, nation, country or other defined zone, or habitat type; organisms that are indigenous to a place are not endemic to it if they are also found elsewhere. The extreme opposite of endemism is cosmopolitan distribution. Another term for a species that is endemic is precinctive, which applies to species (and subspecific categories) that are restricted to a defined geographical area.

The word endemic is from New Latin endēmicus, from Greek ενδήμος, endēmos, "native." Endēmos is formed of en, "in," and dēmos, "the people."[1] An alternative term, precinctive, has been suggested by some scientists,[lower-alpha 1] and was first used by MacCaughey in 1917. It is the equivalent of ‘endemism’.[2] Precinction was perhaps first used by Frank and McCoy.[3][4] Precinctive seems to have been coined by David Sharp of the Hawaiian fauna:[5] "I use the word precinctive in the sense of 'confined to the area under discussion' … 'precinctive forms' means those forms that are confined to the area specified." That definition excludes artificial confinement of examples by humans in far-off botanical gardens or zoological parks.

Physical, climatic, and biological factors can contribute to endemism. The orange-breasted sunbird is exclusively found in the fynbos vegetation zone of southwestern South Africa. The glacier bear is found only in limited places in Southeast Alaska. Political factors can play a part if a species is protected, or actively hunted, in one jurisdiction but not another.[citation needed]

Endemic types or species are especially likely to develop on geographically and biologically isolated areas such as islands and remote island groups, such as Hawaii, the Galápagos Islands, and Socotra; they can equally develop in biologically isolated areas such as the highlands of Ethiopia, or large bodies of water far from other lakes, like Lake Baikal.

Endemics can easily become endangered or extinct if their restricted habitat changes, particularly--but not only--due to human actions, including the introduction of new organisms. There were millions of both Bermuda petrels and "Bermuda cedars" (actually junipers) in Bermuda when it was settled at the start of the seventeenth century. By the end of the century, the petrels were thought extinct. Cedars, already ravaged by centuries of shipbuilding, were driven nearly to extinction in the twentieth century by the introduction of a parasite. Bermuda petrels and cedars are now rare, as are other species endemic to Bermuda.