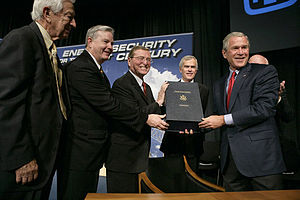 George W. Bush signing the Energy Policy Act of 2005, which was designed to promote US nuclear reactor construction, through incentives and subsidies, including cost-overrun support up to a total of $2 billion for six new nuclear plants.[1]

The Energy Policy Act of 2005 (Pub.L. 109–58) is a bill passed by the United States Congress on July 29, 2005, and signed into law by President George W. Bush on August 8, 2005, at Sandia National Laboratories in Albuquerque, New Mexico. The act, described by proponents as an attempt to combat growing energy problems, changed US energy policy by providing tax incentives and loan guarantees for energy production of various types.

The Public Utility Holding Company Act of 1935 was repealed, effective February 2006, by the passing of this act.[2]

In Congressional bills, an "authorization" of a discretionary program is a permission to spend money IF money has been appropriated; while an "appropriation" is the provision of funds so it can be spent. The authorizations above will not get carried out if money is never appropriated for them.

The bill amends the Uniform Time Act of 1966 by changing the start and end dates of daylight saving time, beginning in 2007. Clocks were set ahead one hour on the second Sunday of March (March 11, 2007) instead of on the first Sunday of April (April 1, 2007). Clocks were set back one hour on the first Sunday in November (November 4, 2007), rather than on the last Sunday of October (October 28, 2007). This had the net effect of slightly lengthening the duration of daylight saving time.

Lobbyists against this provision included the U.S. Conference of Catholic Bishops, the United Synagogue of Conservative Judaism, the National Parent-Teacher Association, the Calendaring and Scheduling Consortium, the Edison Electric Institute, and the Air Transport Association.[14] This section of the act is controversial; some have questioned whether daylight saving results in net energy savings.[15]

The Act created the Energy Efficient Commercial Buildings Tax Deduction, a special financial incentive designed to reduce the initial cost of investing in energy-efficient building systems via an accelerated tax deduction under section §179D of the Internal Revenue Code (IRC)[4] Many building owners are unaware that the [Policy Act of 2005] includes a tax deduction (§179D) for investments in "energy efficient commercial building property" designed to significantly reduce the heating, cooling, water heating and interior lighting cost of new or existing commercial buildings placed into service between January 1, 2006 and December 31, 2013. §179D includes full and partial tax deductions for investments in energy efficient commercial building that are designed to increase the efficiency of energy-consuming functions. Up to $.60 for lighting, $.60 for HVAC and $.60 for building envelope, creating a potential deduction of $1.80 per sq/ft. Interior lighting may also be improved using the Interim Lighting Rule, which provides a simplified process to earn the Deduction, capped at $0.30-$0.60/square foot. Improvements are compared to a baseline of ASHRAE 2001 standards.[16]

To obtain these benefits the facilities/energy division of a business, its tax department, and a firm specializing in EPAct 179D deductions needed to cooperate. IRS mandated software had to be used and an independent 3rd party had to certify the qualification. For municipal buildings, benefits were passed through to the primary designers/architects in an attempt to encourage innovative municipal design.

The Commercial Buildings Tax Deduction expiration date had been extended twice, last by the Energy Improvement and Extension Act of 2008. With this extension, the CBTD could be claimed for qualifying projects completed before January 1, 2014.[16][17]

The commercial building tax deductions[18] could be used to improve the payback period of a prospective energy improvement investment. The deductions could be combined by participating in demand response programs where building owners agree to curtail usage at peak times for a premium. The most common qualifying projects were in the area of lighting.

The collective reduction in national consumption of energy (gas and electricity) is significant for home heating. The Act provided gible financial incentives (tax credits) for average homeowners to make environmentally positive changes to their homes. It made improvements to home energy use more affordable for walls, doors, windows, roofs, water heaters, etc. Consumer spending, and hence the national economy, was abetted. Industry grew for manufacture of these environmentally positive improvements. These positive improvements have been near and long-term in effect.

The collective reduction in national consumption of oil is significant for automotive vehicles. The Act provided tangible financial incentives (tax credits) for operators of hybrid vehicles. It helped fuel competition among auto makers to meet rising demands for fuel-efficient vehicles. Consumer spending, and hence the national economy, was abetted. Dependence on imported oil was reduced. The national trade deficit was improved. Industry grew for manufacture of these environmentally positive improvements. These positive improvements have been near and long-term in effect.

Provisions in the original bill that were not in the act