Energy in France describes energy and electricity production, consumption and import in France.

Électricité de France (EDF) is the main electricity generation and distribution company in France. It was founded on April 8, 1946 as a result of the nationalisation of a number of electricity producers, transporters and distributors by the Communist Minister of Industrial Production Marcel Paul. Until November 19, 2004 it was a government corporation, but it is now a limited-liability corporation under private law (société anonyme). The French government partially floated shares of the company on the Paris Stock Exchange in November 2005,[4] although it retains almost 85% ownership as of the end of 2007.[5]

EDF held a monopoly in the distribution, but not the production, of electricity in France until 1999, when the first European Union directive to harmonize regulation of electricity markets was implemented.[6]

EDF is one of the world's largest producers of electricity. In 2003, it produced 22% of the European Union's electricity, primarily from nuclear power:

A report was published in 2011 by the World Energy Council in association with Oliver Wyman, entitled Policies for the future: 2011 Assessment of country energy and climate policies, which ranks country performance according to an energy sustainability index.[7] The best performers were Switzerland, Sweden, and France. 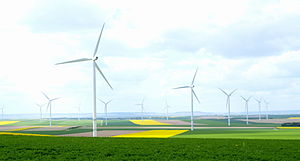 Piper Jaffray expected strong growth in France in 2009 and 2010, partly because of an expected decline in the price of solar panels and partly because of subsidies introduced in 2006 making themselves felt. France should be a key driver for solar together with Italy during 2009-2010. Piper Jaffray believes that France would add 500 megawatts of capacity in both 2009 and 2010. France has 50 megawatts of solar power capacity now.[8]