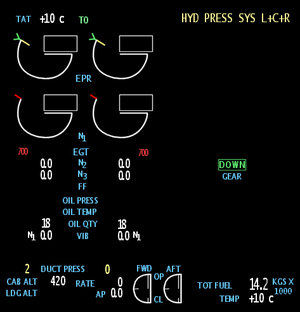 An example of information found on an EICAS

An engine-indicating and crew-alerting system (EICAS)[1] is an integrated system used in modern aircraft to provide aircraft crew with aircraft engines and other systems instrumentation and crew annunciations. On EICAS equipped aircraft the "recommended remedial action" is called a checklist.

EICAS is a key function of a glass cockpit system, which replaces all analog gauges with software-driven electronic displays. Most of the display area is used for navigation and orientation displays, but one display or a section of a display is set aside specifically for EICAS.

The crew-alerting system (CAS) is used in place of the annunciator panel on older systems. Rather than signaling a system failure by turning on a light behind a translucent button, failures are shown as a list of messages in a small window near the other EICAS indications.