Englewood Township, the city's predecessor, is believed to have been named in 1859 for the Engle family. The community had been called the "English Neighborhood", as the first primarily English-speaking settlement on the New Jersey side of the Hudson River after New Netherland was annexed by England in 1664, though other sources mention the Engle family and the heavily forested areas of the community as the derivation of the name.[21][22] Other sources indicate that the name is derived from "wood ingle", meaning "woody nook",[23] or that the name was coined anew.[24]

Numerous other settlements in the United States were named for Englewood as settlement in North America expanded westward. J. Wyman Jones is credited with convincing residents to choose Englewood for the city's name when it was incorporated over such alternatives as "Brayton" and "Paliscena".[22][25][26]

Englewood, like the rest of New Jersey, was populated by Lenape Native Americans prior to European colonization. The Lenape who lived in the Englewood region were of the "turtle clan" which used a stylized turtle as its symbol, but little else is known of those inhabitants.[22]

When Henry Hudson sailed up what would become known as the Hudson River in 1607, he claimed the entirety of the watershed of the river, including Englewood, for the Netherlands, making the future region of Englewood a part of New Netherland. However, the region remained largely unsettled under Dutch rule as the Dutch did little to encourage settlement north of modern Hudson County, as the imposing New Jersey Palisades blocked expansion on the west bank of the Hudson.[22] 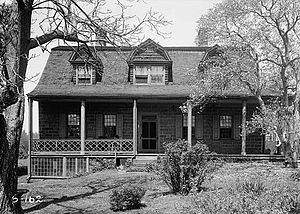 The Garret Lydecker House was built in 1808.

In 1664, after the Dutch surrendered all of New Netherland to England, the rate of settlement picked up. The English were generous with land grants, and many families, not only English but also Dutch and Huguenot, settled the area, which during the colonial era was known as the English Neighborhood. Street names in Englewood still recall the relative diversity of its earliest settlers; Brinckerhoff, Van Brunt, Lydecker, Van Nostrand and Durie (Duryea), all Dutch; Demarest (de Marais), DeMott and Lozier (Le Sueur), French Huguenot; and Moore, Lawrence, Cole and Day, English.

From 1906 until March 16, 1907, when it burned down, Englewood was the site of Upton Sinclair's socialist-inflected intentional community, the Helicon Home Colony. Associated with the project were Charlotte Perkins Gilman and Sinclair Lewis.[27]

The United States telephone industry introduced direct distance dialing (DDD) to the public in Englewood. On November 10, 1951, Englewood Mayor M. Leslie Denning made the first customer-dialed long distance call, to Mayor Frank Osborne of Alameda, California. As of that date, customers of the ENglewood 3, ENglewood 4 and TEaneck 7 exchanges, who could already dial some exchanges in the New York City area, were able to dial 11 cities across the United States by dialing the three-digit area code preceding the local number.[28]

Unincorporated communities, localities and place names located partially or completely within the city include Highwood.[31]

7.17% of Englewood residents identified themselves as being of Colombian American ancestry in the 2000 Census, the ninth-highest percentage of the population of any municipality in the United States.[44]

Englewood Golf Club is a former golf club that was located between Englewood and Leonia. It hosted the 1909 U.S. Open tournament.[45]

Englewood Field Club is a sports club that features tennis courts, a pool, and an outdoor hockey rink.[46]

Flat Rock Brook Nature Center, located at 433 Van Nostrand Avenue, is made up of the remnants of the Palisades Forest. The center, established in 1973, is a 150-acre (61 ha) preserve and education center that includes 3.6 miles (5.8 km) of walking trails and several gardens including the newly renovated Butterfly Garden. Flat Rock allows visitors to learn about the natural ecosystem preserved in the park through exhibits and tours available year round.[48] 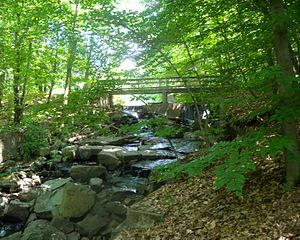 Beginning in 1980, Englewood switched from a Mayor-Council form of government to a modified Council-Manager plan of government in accordance with a Special Charter granted by the New Jersey Legislature.[6][49] Under this charter, the mayor retains appointive and veto powers, while the council acts as a legislative and policy making body, with some power to appoint and confirm appointments. The City Council consists of five members, each elected for a three-year term. Four are elected from the individual wards in which they live and the other is elected by a city-wide vote as an at-large member. The city is divided into four wards which are approximately equal in population. Administrative functions are responsibilities of the City Manager. The six seats in the governing body are elected in a three-year cycle as part of the November general election, with wards two and four both up together, followed a year later by wards one and three, and then the at-large council and mayoral seats. Each ward votes in two of the three years in the cycle, once for its ward seat, in the other year for the two positions voted at-large and one year with no election.

The mayor is elected city-wide to a three-year term of office and has significant powers in appointing members to the Planning Board, the Library Board of Trustees, and, with council confirmation, the Board of Adjustment. The mayor serves on the Planning Board. The mayor attends and may speak at council meetings, but voting is confined only to breaking a deadlock with an affirmative vote for passage of an ordinance or resolution. The mayor has veto power over any city ordinance, but can be overridden with votes from four council members. The City Council is the legislative branch of government, deciding public policy, creating city ordinances and resolutions, passing the city budget, appropriating funds for city services, and hiring the City Manager. The City Council meets generally four times per month (except during summer months).

Wayne Hamer was appointed by the City Council in September 2012 to fill the vacant seat of Jack Drakeford who had died the previous month, and won election in November 2012 to serve the balance of the term through year-end 2013.[59]

Englewood is located in the 9th Congressional District[60] and is part of New Jersey's 37th state legislative district.[9][61][62] 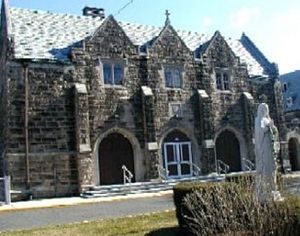 St. Cecilia Interparochial School was closed in 2011 due to declining attendance rates.

Public school students from the city, and all of Bergen County, are eligible to attend the secondary education programs offered by the Bergen County Technical Schools, which include the Bergen County Academies in Hackensack, and the Bergen Tech campus in Teterboro or Paramus. The district offers programs on a shared-time or full-time basis, with admission based on a selective application process and tuition covered by the student's home school district.[107][108]

As an alternative to regular public education, the city is home of the Englewood on the Palisades Charter School,[109] which had an enrollment of 192 students in Kindergarten through fifth grade, as of the 2011-12 school year.[110] Shalom Academy, a charter school with a focus on Hebrew language immersion, had planned to open for grades K-5 in September 2011, serving students from both Englewood and Teaneck, but as of March 2013 had still not received final approval from the New Jersey Department of Education.[111]

In the face of a declining enrollment, St. Cecilia Interparochial School was closed by the Roman Catholic Archdiocese of Newark at the end of the 2010-11 school year, with an expected student body of 85 students for K-8 in the following year constituting less than half of the number of students needed to keep the school financially viable. St. Cecilia High School had been closed in 1986.[116]

Route 4, Route 93, Interstate 95 (the New Jersey Turnpike), County Route 501, and County Route 505 also serve Englewood. The northern terminus of Route 93 is at the intersection with Route 4, but the road continues north as CR 501.

The New Jersey Turnpike travels through Englewood for 0.43 miles (0.69 km) near the city's southern border with Leonia, as Interstate 95 arches north from its intersection with Interstate 80 in Teaneck and heads toward the George Washington Bridge.[118]

A proposed extension of the Hudson–Bergen Light Rail along the Northern Branch would include stations at Englewood Hospital and Medical Center, Town Center and Route 4.[122] In 2013, NJ Transit announced that the line would end in Englewood, after Tenafly officials estimated that as much in $8 million in commercial property would be lost and residents raised strong objections.[123] As of 2014, Englewood Mayor Frank Huttle III has worked together with Jersey City Mayor Steven Fulop to advocate on behalf of the project and obtain the needed state and federal funding needed to proceed with the plan, with Huttle emphasizing the economic benefits from the project and that the city wanted to host the terminus, which would include a parking garage near Englewood Hospital and additional parking near Palisade Avenue in the commercial center of the city.[124]