In the history of English phonology, there have been many diachronic sound changes affecting vowels, especially involving phonemic splits and mergers. A number of these changes are specific to vowels which occur before /l/.

Diphthongization occurred since Early Modern English in certain -al- and -ol- sequences before coronal or velar consonants, or at the end of a word or morpheme. In these sequences, /al/ became /awl/ and then /ɑul/, while /ɔl/ became /ɔwl/ and then /ɔul/. Both of these merged with existing diphthongs: /ɑu/ as in law and /ɔu/ as in throw.

This L-vocalization established a pattern that would influence the spelling pronunciations of some relatively more recent loanwords like Balt, Malta, waltz, Yalta, and polder. It also influenced English spelling reform efforts, explaining the American English mold and molt vs. the traditional mould and moult.

In most circumstances, the changes stopped there. But in -alk and -olk words, the /l/ disappeared entirely in most accents (with the notable exception of Hiberno-English). This change caused /ɑulk/ to become /ɑuk/, and /ɔulk/ to become /ɔuk/. Even outside Ireland, some of these words have more than one pronunciation that retains the /l/ sound, especially in American English where spelling pronunciations caused partial or full reversal of L-vocalization in a handful of cases:

Words like fault and vault did not undergo L-vocalization, but rather L-restoration, having previously been L-vocalized independently in Old French and lacking the /l/ in Middle English, but having it restored by Early Modern English. The word falcon existed simultaneously as homonyms fauco(u)n and falcon in Middle English. The word moult/molt never originally had /l/ to begin with, instead deriving from Middle English mout and related etymologically to mutate; the /l/ joined the word intrusively.

The Great Vowel Shift changed the diphthongs to their present pronunciations, with /ɑu/ becoming the monophthong /ɔː/, and /ɔu/ raising to /oʊ/.

The loss of /l/ in words spelt with -alf, -alm, -alve and -olm did not involve L-vocalization in the same sense, but rather the elision of the consonant and usually the compensatory lengthening of the vowel.

More extensive L-vocalization is a notable feature of certain dialects of English, including Cockney, Estuary English, New York English, New Zealand English, Pittsburgh and Philadelphia English, in which an /l/ sound occurring at the end of a word or before a consonant is pronounced as some sort of close back vocoid, e.g., [w], [o] or [ʊ]. The resulting sound may not always be rounded. The precise phonetic quality varies. It can be heard occasionally in the dialect of the English East Midlands, where words ending in -old can be pronounced /oʊd/. KM Petyt (1985) noted this feature in the traditional dialect of West Yorkshire but said it has died out.[1] However, in recent decades l-vocalization has been spreading outwards from London and the south east,[2][3] John C Wells argued that it is probable that it will become the standard pronunciation in England over the next one hundred years,[4] an idea which Petyt criticised in a book review.[5]

In Cockney, Estuary English and New Zealand English, l-vocalization can be accompanied by phonemic mergers of vowels before the vocalized /l/, so that real, reel and rill, which are distinct in most dialects of English, are homophones as [ɹɪw].

Graham Shorrocks noted extensive L-vocalisation in the dialect of Bolton, Greater Manchester and commented, "many, perhaps, associate such a quality more with Southern dialects, than with Lancashire/Greater Manchester."[6]

In the accent of Bristol, syllabic /l/ can be vocalized to /o/, resulting in pronunciations like /ˈbɒto/ (for bottle). By hypercorrection, however, some words originally ending in /o/ were given an /l/: the original name of the town was Bristow, but this has been altered by hypercorrection to Bristol.[7]

African-American Vernacular English dialects may have L-vocalization as well. However, in these dialects, it may be omitted altogether (e.g. fool becomes [fuː]. Some English speakers from San Francisco - particularly those of Asian ancestry - also vocalize or omit /l/.[8]

The salary–celery merger is a conditioned merger of /æ/ (as in bat) and /ɛ/ (as in bet) when they occur before /l/, thus making salary and celery homophones.[9][10][11][12] The merger is not well studied. It is referred to in various sociolinguistic publications, but usually only as a small section of the larger change undergone by vowels preceding /l/ in articles about l-vocalization.

This merger has been detected in the English spoken in New Zealand and in Wangaratta, Victoria, Australia. In varieties with the merger, salary and celery are both pronounced /sæləri/ (Cox & Palethorpe, 2003). (Most Victorians and New Zealanders do not exhibit l-vocalization.)

The Cox and Palethorpe study presented at a 2003 conference tested just one group of speakers from Victoria: 13 fifteen-year-old girls from a Catholic girls' school in Wangaratta. Their pronunciations were compared with those of school girl groups in the towns of Temora, Junee and Wagga Wagga in New South Wales. In the study conducted by Cox and Palethorpe, the group in Wangaratta exhibited the merger while speakers in Temora, Junee and Wagga Wagga did not. In the same study Cox and Palethorpe note that "There is no evidence in this data of raised /æ/ before /l/ as in 'Elbert' for 'Albert', a phenomenon that has been popularly suggested for Victorians."[10]

Horsfield (2001) investigates the effects of postvocalic /l/ on the preceding vowels in New Zealand English; her investigation covers all of the New Zealand English vowels and is not specifically tailored to studying mergers and neutralizations, but rather the broader change that occurs across the vowels. She has suggested that further research involving minimal pairs like telly and tally, celery and salary should be done before any firm conclusions are drawn.

A pilot study of the merger was done, which yielded perception and production data from a few New Zealand speakers. The results of the pilot survey suggested that although the merger was not found in the speech of all participants, those who distinguished between /æl/ and /el/ also accurately perceived a difference between them; those who merged /æl/ and /el/ were less able to accurately perceive the distinction. The finding has been interesting to some linguists because it concurs with the recent understanding that losing a distinction between two sounds involves losing the ability to produce it as well as to perceive it (Gordon 2002). However, due to the very small number of people participating in the study the results cannot be considered convincing. 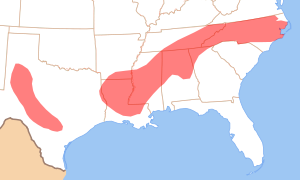 The areas marked in red are where the fill–feel merger is most consistently present in the local accent. Map based on Labov, Ash, and Boberg (2006: 71).[13]

The fill–feel merger is a conditioned merger of the vowels /ɪ/ and /iː/ before /l/ that occurs in some dialects of American English. The heaviest concentration of the merger is found in, but not necessarily confined to Southern American English: in North Carolina, eastern Tennessee, northern Alabama, Mississippi, Louisiana (but not New Orleans), and west-central Texas (Labov, Ash, and Boberg 2006: 69-73). This merger, like a lot of other features of Southern American English, can also be found in AAVE.

The same two regions show a closely related merger, namely the fell–fail merger of /ɛ/ and /eɪ/ before /l/ that occurs in some varieties of Southern American English making fell and fail homophones. In addition to North Carolina and Texas, these mergers are found sporadically in other Southern states and in the Midwest and West.[14][15]

The full–fool merger is a conditioned merger of /ʊ/ and /uː/ before /l/, making pairs like pull/pool and full/fool homophones. The main concentration of the pull–pool merger is in the North Midland accent of American English, particularly in Pittsburgh English. The merger is less consistently present in eastern Pennsylvania and southern Indiana.[16] Accents with L-vocalization, such as New Zealand English, Estuary English and Cockney, may also have the full–fool merger in most cases, but when a suffix beginning with a vowel is appended, the distinction returns: Hence 'pull' and 'pool' are [pʊo], but 'pulling' is /ˈpʊlɪŋ/ whereas 'pooling' remains /ˈpuːlɪŋ/.[17]

The fill–feel merger and full–fool merger are not unified in American English; they are found in different parts of the country, and very few people show both mergers.[18]

The hull–hole merger is a conditioned merger of /ʌ/ and /oʊ/ before /l/ occurring for some speakers of English English with l-vocalization. As a result, "hull" and "hole" are homophones. The merger is also mentioned by Labov, Ash, and Boberg (2006: 73) as a merger before /l/ in North American English that might require further study.

The doll–dole merger is a conditioned merger, for some Londoners, of /ɒ/ and /əʊ/ before nonprevocalic /l/. As a result, doll and dole may become homophones.[19] If the /l/ is morpheme-final, as in doll-dole, the underlying vowel is still distinguished in derived forms such as dolling/doling.[19]

Where the /l/ is not morpheme-final, however, the distinction is not recoverable. This may lead to sold rhyming with solve, and to hypercorrections such as /səʊlv/ for solve (RP /sɒlv/).[19] There do not appear to be any minimal pairs in this environment, since RP /ɒ/ and /əʊ/ are in more-or-less complementary distribution in stressed syllables, with /ɒ/ before /lf/ and /lv/ (e.g. golf, dolphin, solve, revolve) and /əʊ/ elsewhere (e.g. bolt, polka, gold, soldier, holster).

The wholly–holy split, also known as the "goat split", is a process that has affected London dialects and Estuary English.[20][21] In the first phase of the split, the diphthong of "goat" /əʊ/ developed an allophone [ɒʊ] before "dark" (nonprevocalic) /l/. Thus "goal" no longer had the same vowel as "goat" ([ɡɒʊɫ] vs. [ɡəʊʔ]).[20] In the second phase, the diphthong [ɒʊ] spread to other forms of affected words. For example, the realization of "rolling" changed from [ˈɹəʊlɪŋ] to [ˈɹɒʊlɪŋ] on the model of "roll" [ɹɒʊɫ]. This led to the creation of a minimal pair for some speakers: "wholly" [ˈhɒʊli] vs. "holy" [ˈhəʊli] and thus to phonemicization of the split.[20]

The vile–vial merger is where the words in the vile set ending with /-ˈaɪl/ (bile, file, guile, I'll, Kyle, Lyle, mile, Nile, pile, rile, smile, stile, style, tile, vile, while, wile) rhyme with words in the vial set ending with /-ˈaɪəl/ (decrial, denial, dial, espial, Niall, phial, trial, vial, viol).[22] This merger involves the dephonemicization of schwa that occurs after a vowel and before /l/, causing the vowel-/l/ sequence to be pronounced as either one or two syllables.

This merger may also be encountered with other vowel rhymes too, including:

Labov, Ash, and Boberg (2006: 73)[23] mention four mergers before /l/ that may be under way in some accents of North American English, and which require more study: