From Infogalactic: the planetary knowledge core
(Redirected from English Commonwealth)
Jump to: navigation, search
Not to be confused with the Commonwealth of Nations.

The Commonwealth was the period from 1649 onwards when England, along later with Ireland and Scotland,[1] was ruled as a republic following the end of the Second English Civil War and the trial and execution of Charles I. The republic's existence was initially declared through "An Act declaring England to be a Commonwealth",[2] adopted by the Rump Parliament on 19 May 1649. Power in the early Commonwealth was vested primarily in the Parliament and a Council of State. During the period, fighting continued, particularly in Ireland and Scotland, between the parliamentary forces and those opposed to them, as part of what is now referred to as the Third English Civil War.

In 1653, after the forcible dissolution of the Rump Parliament, Oliver Cromwell was declared Lord Protector of a united "Commonwealth of England, Scotland and Ireland" under the terms of the Instrument of Government, inaugurating the period now usually known as the Protectorate. After Cromwell's death, and following a brief period of rule under his son, Richard Cromwell, the Protectorate Parliament was dissolved in 1659 and the Rump Parliament recalled, the start of a process that led ultimately to the restoration of the monarchy in 1660. The term Commonwealth is sometimes used for the whole of 1649 to 1660 – a period referred to by monarchists as the Interregnum – although for other historians, the use of the term is limited to the years prior to Cromwell’s formal assumption of power in 1653.

The Rump was created by Pride's Purge of those members of the Long Parliament who did not support the political position of the Grandees in the New Model Army. Just before and after the execution of King Charles I on 30 January 1649, the Rump passed a number of acts of Parliament creating the legal basis for the republic. With the abolition of the monarchy, Privy Council and the House of Lords, it had unchecked executive, as well as legislative, power. The English Council of State, which replaced the Privy Council, took over many of the executive functions of the monarchy. It was selected by the Rump, and most of its members were MPs. Ultimately, however, the Rump depended on the support of the Army with which it had a very uneasy relationship. After the Execution of Charles I, the House of Commons abolished the monarchy and the House of Lords. It declared the people of England "and of all the Dominions and Territoryes thereunto belonging" to be henceforth under the governance of a "Commonwealth and Free State", effectively a republic.

In Pride's Purge, all members of parliament (including most of the political Presbyterians) who would not accept the need to bring the King to trial had been removed. Thus the Rump never had more than two hundred members (less than half the number of the Commons in the original Long Parliament). They included: supporters of religious independents who did not want an established church and some of whom had sympathies with the Levellers; Presbyterians who were willing to countenance the trial and execution of the King; and later admissions, such as formerly excluded MPs who were prepared to denounce the Newport Treaty negotiations with the King.

Most Rumpers were gentry, though there was a higher proportion of lesser gentry and lawyers than in previous parliaments. Less than one-quarter of them were regicides. This left the Rump as basically a conservative body whose vested interests in the existing land ownership and legal systems made it unlikely to want to reform them. 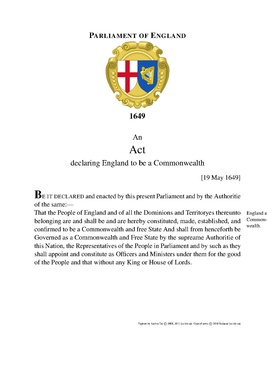 For the first two years of the Commonwealth, the Rump faced economic depression and the risk of invasion from Scotland and Ireland. By 1653 Cromwell and the Army had largely eliminated these threats.

There were many disagreements amongst factions of the Rump. Some wanted a republic, but others favoured retaining some type of monarchical government. Most of England's traditional ruling classes regarded the Rump as an illegal government made up of regicides and upstarts. However, they were also aware that the Rump might be all that stood in the way of an outright military dictatorship. High taxes, mainly to pay the Army, were resented by the gentry. Limited reforms were enough to antagonise the ruling class but not enough to satisfy the radicals.

Despite its unpopularity, the Rump was a link with the old constitution, and helped to settle England down and make it secure after the biggest upheaval in its history. By 1653, both France and Spain had recognised England's new government.

Though the Church of England was retained, episcopacy was suppressed and the Act of Uniformity 1558 was repealed in September 1650.[3] Mainly on the insistence of the Army, many independent churches were tolerated, although everyone still had to pay tithes to the established church.

Some small improvements were made to law and court procedure; for example, all court proceedings were now conducted in English rather than in Law French or Latin.[4] However, there were no widespread reforms of the common law. This would have upset the gentry, who regarded the common law as reinforcing their status and property rights.

The Rump passed many restrictive laws to regulate people's moral behaviour, such as closing down theatres and requiring strict observance of Sunday. This antagonised most of the gentry.

Cromwell, aided by Thomas Harrison, forcibly dismissed the Rump on 20 April 1653, for reasons that are unclear. Theories are that he feared the Rump was trying to perpetuate itself as the government, or that the Rump was preparing for an election which could return an anti-Commonwealth majority. Many former members of the Rump continued to regard themselves as England's only legitimate constitutional authority. The Rump had not agreed to its own dissolution when it was dispersed by Cromwell, and legislation from the period immediately before the Civil War—the Act against dissolving the Long Parliament without its own consent (11 May 1641) – gave them the legal basis for this view.

The dissolution of the Rump was followed by a short period in which Cromwell and the Army ruled alone. Nobody had the constitutional authority to call an election, but Cromwell did not want to impose a military dictatorship. Instead, he ruled through a 'nominated assembly' which he believed would be easy for the Army to control, since Army officers did the nominating.

Barebone's Parliament was opposed by former Rumpers and ridiculed by many gentry as being an assembly of 'inferior' people. However, over 110 of its 140 members were lesser gentry or of higher social status. (An exception was Praise-God Barebone, a Baptist merchant after whom the Assembly got its derogatory nickname.) Many were well educated.

The assembly reflected the range of views of the officers who nominated it. The Radicals (approximately forty) included a hard core of Fifth Monarchists who wanted to be rid of Common Law and any state control of religion. The Moderates (approximately 60) wanted some improvements within the existing system and might move to either the radical or conservative side depending on the issue. The Conservatives (approximately 40) wanted to keep the status quo (since Common Law protected the interests of the gentry, and tithes and advowsons were valuable property).

Cromwell saw Barebone's Parliament as a temporary legislative body which he hoped would produce reforms and develop a constitution for the Commonwealth. However, members were divided over key issues, only 25 had previous parliamentary experience, and although many had some legal training, there were no qualified lawyers.

Cromwell seems to have expected this group of 'amateurs' to produce reform without management or direction. When the radicals mustered enough support to defeat a bill which would have preserved the status quo in religion, the conservatives, together with many moderates, surrendered their authority back to Cromwell who sent soldiers to clear the rest of the Assembly. Barebone's Parliament was over. 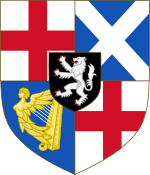 Commonwealth government by a Council of State and Parliament, was divided in two by The Protectorate when the executive was vested in a Lord Protector, who governed under a written constitution that mandated that the Lord Protector summon triennial parliaments that should sit for several months each year.

On 12 April 1654, under the terms of the Tender of Union, the Ordinance for uniting Scotland into one Commonwealth with England was issued by the Lord Protector and proclaimed in Scotland by the military governor of Scotland, General George Monck, 1st Duke of Albemarle. The ordinance declared that "the people of Scotland should be united with the people of England into one Commonwealth and under one Government" and decreed that a new "Arms of the Commonwealth", incorporating the Saltire, should be placed on "all the public seals, seals of office, and seals of bodies civil or corporate, in Scotland" as "a badge of this Union".[6][1]

On the death of Oliver Cromwell in 1658, his son, Richard Cromwell, inherited the title Lord Protector, but internal divisions among the republican party led to his resignation, the end of the Protectorate and a second period of Commonwealth government by a Council of State and Parliament.

The Protectorate might have continued if Cromwell's son Richard, who was made Lord Protector on his father's death, had been capable of carrying on his father's policies. Richard Cromwell's main weakness was that he did not have the confidence of the New Model Army.

After seven months the Grandees in the New Model Army removed him and, on 6 May 1659, they reinstalled the Rump Parliament. Charles Fleetwood was appointed a member of the Committee of Safety and of the Council of State, and one of the seven commissioners for the army. On 9 June he was nominated lord-general (commander-in-chief) of the army. However, his power was undermined in parliament, which chose to disregard the army's authority in a similar fashion to the pre–Civil War parliament. On October 12, 1659, the Commons cashiered General John Lambert and other officers, and installed Fleetwood as chief of a military council under the authority of the Speaker. The next day Lambert ordered that the doors of the House be shut and the members kept out. On 26 October a "Committee of Safety" was appointed, of which Fleetwood and Lambert were members. Lambert was appointed major-general of all the forces in England and Scotland, Fleetwood being general. Lambert was now sent, by the Committee of Safety, with a large force to meet George Monck, who was in command of the English forces in Scotland, and either negotiate with him or force him to come to terms.

It was into this atmosphere that General George Monck marched south with his army from Scotland. Lambert's army began to desert him, and he returned to London almost alone. On 21 February 1660, Monck reinstated the Presbyterian members of the Long Parliament 'secluded' by Pride, so that they could prepare legislation for a new parliament. Fleetwood was deprived of his command and ordered to appear before parliament to answer for his conduct. On 3 March Lambert was sent to the Tower, from which he escaped a month later. Lambert tried to rekindle the civil war in favour of the Commonwealth by issuing a proclamation calling on all supporters of the "Good Old Cause" to rally on the battlefield of Edgehill. But he was recaptured by Colonel Richard Ingoldsby, a regicide who hoped to win a pardon by handing Lambert over to the new regime. The Long Parliament dissolved itself on 16 March.

On 4 April 1660, in response to a secret message sent by Monck, Charles II issued the Declaration of Breda, which made known the conditions of his acceptance of the crown of England. Monck organised the Convention Parliament, which met for the first time on 25 April. On 8 May it proclaimed that King Charles II had been the lawful monarch since the execution of Charles I in January 1649.[7] Charles returned from exile on 23 May.[8] He entered London on 29 May, his birthday. To celebrate "his Majesty's Return to his Parliament" May 29 was made a public holiday, popularly known as Oak Apple Day.[9] He was crowned at Westminster Abbey on 23 April 1661.[8]