From Infogalactic: the planetary knowledge core
(Redirected from English Midlands)
Jump to: navigation, search
For other uses, see Midlands.

The Midlands is an area spanning central England that broadly corresponds to the early medieval Kingdom of Mercia. It borders South East England, South West England, North West England, Yorkshire and Humber, East of England and Wales. Its largest city is Birmingham, and it was an important location for the Industrial Revolution of the 18th and 19th centuries. The greater part of the area is now administered as the Government Office Regions of the West Midlands and East Midlands.[citation needed]

The Midlands does not correspond to any current administrative area, and there is therefore no strict definition. However, it is generally considered to include the counties of Derbyshire, Herefordshire, Leicestershire, Northamptonshire, Nottinghamshire, Rutland, Shropshire, Staffordshire, Warwickshire, the West Midlands metropolitan boroughs and Worcestershire. Lincolnshire is considered by some part of the Midlands but generally excluded, on account of its extensive coastline. 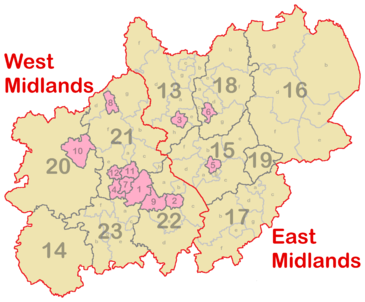 The two Government Office Regions of West and East Midlands.

With more restricted boundaries than the traditional area known as the Midlands, two modern Government Office Regions together represent the latter: West Midlands and East Midlands. These are also constituencies of the European Parliament.

The largest Midlands conurbation, which includes the cities of Birmingham and Wolverhampton, is approximately covered by the metropolitan county (which also includes the city of Coventry) of the West Midlands. Parts of the East Midlands are also densely populated, particularly the triangle formed by the cities of Nottingham, Leicester and Derby, which also includes sizeable towns such as Loughborough and the Long Eaton–Beeston–Stapleford subconurbation.

Various part of the Midlands (particularly Warwickshire and Leicestershire) are somewhat poetically referred to as the Heart of England, especially in tourist literature.

The various areas of the Midlands have their own distinctive character, giving rise to a high number of local history and industrial heritage groups. Nottingham played a notable part in the English Civil War, which is commemorated in a number of place names (Parliament Terrace, Parliament Street, Standard Hill). Areas such as Derbyshire's Amber Valley and Erewash combine attractive countryside with industrial heritage and are home to historic canals and sites associated with the mining industry.The Black Country, broadly the boroughs of Dudley, Sandwell, Wolverhampton and Walsall, played an important part in the Industrial Revolution.[citation needed]

The Midlands has a temperate maritime climate, with cold, cloudy, wet winters and comfortable, mostly dry, mostly sunny summers. The Midlands is home to the snow line, which runs through the village of Studley. This in general is the line where snow does not always fall every winter south of this line and many of the falls north of this border do not fall south of it. The temperature usually ranges from −0.4 °C (31.3 °F) during winter nights to 24.1 °C (75.4 °F) during summer days. Due to its geographical location, which is furthest away from the coast than anywhere else in England, it typically receives mostly light winds, with warm days and cold nights. Sometimes the Midlands can have very colds nights such as a minimum of −18.7 °C (−1.7 °F) in Pershore on 20 December 2010. The previous day had a maximum of only −8.2 °C (17.2 °F), also in Pershore. Hot days are also possible, such as a maximum of 34 °C (93 °F) in Pershore on 19 July 2006. There can also be very mild winters nights, such as in Bidford-on-Avon when the temperature at 6 pm was as high as 15.2 °C (59.4 °F) on the 9 January 2015. At 8 am the following morning the temperature was still at 13 °C (55 °F).[1][2][3][4]