Markova and Dolin were leading stars of the Ballets Russes, one of the most influential ballet companies of the 20th century. After the death of its director Serge Diaghilev in 1929, the Company was disbanded and in 1931, one of its dancers, Ninette de Valois, founded the Vic-Wells Ballet Company in London, with Markova and Dolin as Principal dancers, Markova becoming Prima Ballerina in 1933. Markova and Dolin left the Vic-Wells Ballet in 1935 to tour as the Markova-Dolin Company and following the success of their performances, they decided to form their own company with the sole purpose being to tour both nationally and internationally, taking ballet to audiences that had not had the opportunity to see the art form. 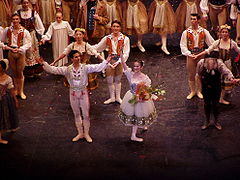 Elena Glurdjidze as Swanilda & Aroniel Vargas as Franz in the English National Ballet's production of Coppélia. Southampton's Mayflower Theatre. Also in the picture (bowing) is Michael Coleman as Dr. Coppelius.

London Festival Ballet was founded in 1950 with the financial backing of the Polish impresario Julian Braunsweg. The name was inspired by the then imminent Festival of Britain, however the Company would later be renamed to today's English National Ballet. Dolin was the Company's first Artistic Director and established the Company as a touring group both nationally in the UK and Internationally, touring abroad for the first time in 1951. Dolin also introduced a number of educational programs in the early years, designed to make ballet accessible to new audiences. Dolin remained as Artistic Director until 1962, succeeded by John Gilpin, who was also principal dancer with the Company from 1950 to 1960 and 1962 to 1971. The Company grew in size and status, undertaking extensive national and international tours, presenting a new generation of dancers—all while repeatedly facing bankruptcy. Braunsweg left in 1965 and Donald Albery took over until 1968, stabilising the budget with safer programming. Former Royal Ballet dancer Beryl Grey directed the Company (now named London Festival Ballet) from 1968 to 1979, raising technical standards, touring widely and inviting prominent guest stars and choreographers including Leonide Massine and Rudolf Nureyev, who picked ballerina Eva Evdokimova to be his first Princess Aurora in his production of The Sleeping Beauty in 1975. Evdokimova in turn became the prima ballerina of the Company under Grey's leadership and continued to reign under successive directors John Field and Peter Schaufuss.

It was Evdokimova who suggested to change the name to English National Ballet to reflect the Company's role as Britain's only classical ballet company dedicated to touring ballets nationwide at an affordable price for audiences. The name change was implemented in 1989.

Ivan Nagy (until 1993), Derek Deane (until 2001) and Matz Skoog (until 2006) directed the Company before Wayne Eagling, former head of Dutch National Ballet, took over in 2006. In April 2012, following the February sudden announcement of resignation by Eagling, principal dancer for The Royal Ballet Tamara Rojo was announced to become his successor at the end of the 2012 season, in August of that year.[1]

The Company's dancers are listed on the official website with photographs and linked biographies.[3]

As of May 2014, guest artists include Carlos Acosta, Vadim Muntagirov, Friedemann Vogel, and Alban Lendorf.[3]