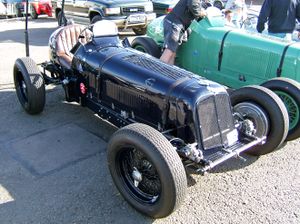 English Racing Automobiles (ERA) was an English racing car manufacturer active from 1933 to 1954. 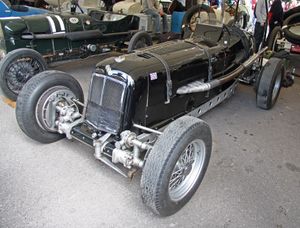 ERA was founded by Humphrey Cook, Raymond Mays, and Peter Berthon in November 1933 and established in Bourne, Lincolnshire, next to Eastgate House, the family home of Raymond Mays between Eastgate road and Spalding road. Their ambition was to manufacture and campaign a team of single seater racing cars capable of upholding British prestige in Continental European racing.

With the cost of aspiring to full Grand Prix racing prohibitive, they instead aimed ERA's efforts at the smaller voiturette—1500cc supercharged—class of motor racing, the Formula 2 equivalent of the day. Humphrey Cook financed the operation—using the wealth from the family drapery business, Cook, Son & Co., of St Paul's Churchyard, London. Peter Berthon was responsible for the overall design of the cars, while Raymond Mays became its principal driver—having already successfully raced several other makes including Vauxhall, Bugatti and Riley. 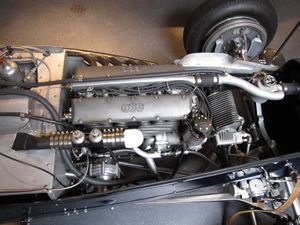 A new chassis was conceived by British designer Reid Railton (who had also successfully designed the Bluebird land speed record cars for Malcolm Campbell) and was constructed by Thomson & Taylor at Brooklands. The engine was based on the well proven Riley 6-cylinder unit, albeit this was modified in a number of significant ways. A stronger forged crankshaft with a large centre Hyatt roller bearing was made and an entirely new aluminium cylinder head designed. The engine was supercharged using a bespoke supercharger designed by Murray Jamieson who had worked with Mays & Berthon on the White Riley. The ERA engine was designed around three capacities—a base 1500cc, an 1100cc and also was capable of being expanded up to 2000 cc. It ran on methanol and in its 1500cc form was capable of producing around 180–200 bhp with in excess of 250–275 bhp in 2000cc form.

The panel-beating brothers George and Jack Gray hand-fashioned the new car’s single-seater bodywork, to a design credited to a Mr Piercy who had previously designed the bodywork for Malcolm Campbell’s ‘Bluebird’ record breaker.

The unveiling of the first ERA—chassis R1A—to the press and public took place at Brooklands on 22 May 1934. After initial chassis handling problems, which required a number of modifications, soon ERA had a winning formula. By the end of the year ERAs had scored notable victories against many more established marques. In 1935, in a major race at the Nürburgring, ERAs took first, third, fourth and fifth places. 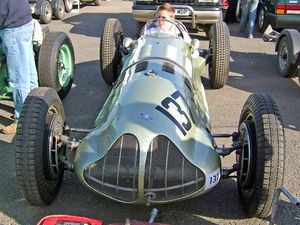 Through the remainder of the decade, with drivers of the calibre of Dick Seaman in the team, ERA dominated voiturette racing.

Two Siamese princes, Chula Chakrabongse and Bira Birabongse, whose trio of ERAs became famous as "Hanuman", "Romulus" and "Remus", ran their own team, operating from The White Mouse Garage. Prince Chula owned the team, having bought Romulus as a present for his cousin, Prince Bira, who was the team's driver.

The more modern E-Type ERA appeared just before the Second World War but was not fully developed.

The Second World War brought a halt to motor racing in Europe, and the team's Bourne site was sold to the Bus operator Delaine who occupied adjacent premises. The original building is still in use today by Delaine as an office block. By the time racing resumed in the late 1940s Berthon and Mays had moved on to the British Racing Motors (BRM) project. 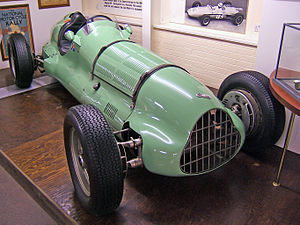 ERA restarted operations in Dunstable under new ownership in 1947 when Leslie Johnson bought the company, together with ERA E-Type GP2, the second of two built in 1939, which had been raced by Reg Parnell and Leslie Brooke. Refitted with a Zoller supercharger and driven by Johnson, GP2 tied with Parnell's Maserati 4CLT for fastest lap in the 1948 British Empire Trophy and finished fifth. In the same race GP1, upgraded by the works with Murray Jamieson-designed Roots-type supercharging and driven by Reg Parnell's mechanic Wilkie Wilkinson (who had supervised modification of the E-Types), retired with a broken connecting rod.[1]

After posting the fastest time in the opening practice session for the 1948 British Grand Prix, Johnson retired GP2 from third place on the first lap when a driveshaft universal joint failed. In practice for the Coupe du Salon at Montlhéry he broke the lap record but retired GP2 from the race with a fractured fuel tank after three laps.[1]

In 1949 at Goodwood GP2 broke a back axle universal joint in practice but Johnson took the car to fifth in the Richmond Trophy and third in the Chichester Cup. In the first day's practice for the Jersey International Road Race, he was second-fastest to Luigi Villoresi's record-breaking lap in a Maserati but on the second day the engine bearings failed and the car did not race. At Silverstone's 1950 Grand Prix d'Europe the supercharger disintegrated after two laps.[1]

In the 1949 BRDC/Daily Express International Trophy, Peter Walker took GP1 to within 1.2 seconds of Giuseppe Farina's Maserati in practice and finished fifth in the race, despite gearbox and steering problems, a leaking radiator, and the exhaust burning the driver's foot. Walker was fastest in practice for Ireland's Wakefield Trophy road race, but a snatching brake forced him down the escape road at the first corner. Here GP1's race ended when it was hit by an Alta that had already collided with Salvadori's Maserati 4CL.[1]

Finally in 1950, GP1 was gutted by fire in a crash at the British Empire Trophy race on the Isle of Man, caused by driveshaft failure when the car was at high speed with Walker at the wheel.[1]

The 1.5-litre G-Type raced in the 1952 World Championship, the first season to be run under Formula Two rules. The fundamental design was laid down by Prof. Dr Ing Robert Eberan-Eberhorst, one of the world's leading theorists of racing car design, who had replaced Dr. Ferdinand Porsche at Auto Union and designed the Auto Union Type D Grand Prix car. His protégé and successor David Hodkin completed the G-Type design.[2] The frame was constructed of two longitudinal magnesium tubes with four crossmembers. Suspension was by double wishbone with coil springs at the front and de Dion tube at the rear. The car was powered by a Bristol engine with modifications to Hodkin's specifications.

Stirling Moss drove, but the engine was unreliable and the race results were disappointing. Moss said: "It was, above all, a project which made an awful lot of fuss about doing very little. By this time I was very disillusioned by the Clever Professor approach to racing car design. I would eventually learn that even the most brilliant concept could fail if the team concerned lacks the manpower and organization and money to develop the inevitable bugs out of it."

Johnson sold the project to Bristol—who used the car as the basis for an assault on Le Mans that would bring them several class wins in the mid-1950s—and focused the company on research and development (R&D) engineering.[3] He eventually sold it to Zenith Carburettor Ltd, which was then purchased by Solex, another carburettor firm.

In 1949 von Eberhorst, working for ERA, designed the space-frame chassis for the Jowett Jupiter.

Although renamed Engineering Research and Application Ltd, and still primarily an R&D operation, ERA still did a small amount of race preparation. In the 1980s it put its name to the ERA Mini Turbo, a turbocharged version of the Mini. 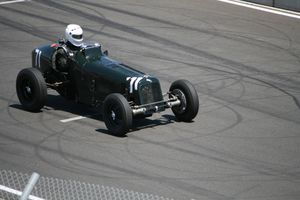 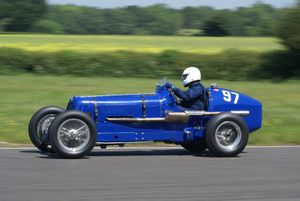 The vast majority of prewar ERAs are still in existence, and they have continuous and verifiable provenance. They still compete in historic events despite the youngest being nearly seventy years old. The cars are particularly associated with the Shelsley Walsh hillclimb thanks in large part to Mays, who won the first two British Hill Climb Championships in 1947 and 1948; indeed an ERA has for many years held the hill record for a prewar car.

There is a permanent exhibition about Raymond Mays' contribution to motor racing, including his ERA days, at Bourne Civic Society's heritage centre in Bourne. It is open on weekend and bank holiday afternoons.