English claims to the French throne 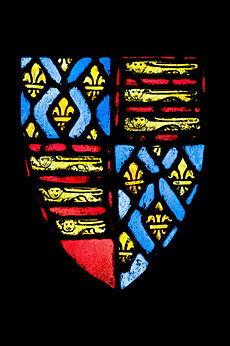 English stained glass window from c. 1350–77, showing the coat of arms of Edward III, which featured the three lions of England quartered with the fleurs-de-lys of France.[1]

From the 1340s to the 19th century, excluding two brief intervals in the 1360s and the 1420s, the kings and queens of England (and, later, of Great Britain) also claimed the throne of France. The claim dates from Edward III, who claimed the French throne in 1340 as the sororal nephew of the last direct Capetian, Charles IV. Edward and his heirs fought the Hundred Years War to enforce this claim, and were briefly successful in the 1420s under Henry V and Henry VI, but the House of Valois, a cadet branch of the Capetian dynasty, was ultimately victorious and retained de facto control of France. Despite this, English and British monarchs continued to prominently call themselves kings of France, and the French fleur-de-lys were included in the royal arms. This continued until 1801, by which time France had no monarch, having become a republic. The Jacobite claimants, however, did not explicitly relinquish the claim.

The title was first assumed in 1340 by Edward III of England, the Kingdom of England being ruled by the French Plantagenet dynasty at the time. Edward III claimed the throne of France after the death of his uncle Charles IV of France. At the time of Charles IV's death in 1328, Edward was his nearest male relative through Edward's mother Isabella of France. Since the election of Hugh Capet in 987, the French crown had always passed based on male-line relations (father to son until 1316). There was no precedent for someone succeeding to the French throne based on his maternal ancestry, nor had there been a need to. There had been no shortage of sons for more than three centuries from the inception of the House of Capet until the early 14th century, when new precedents concerning female inheritance finally had to be introduced. On the death of Philip IV the Fair's son Louis X in 1316, immediately followed by that of his posthumous son John I, it had to be decided whether his young daughter Joan or his brother Philip would succeed to the throne. Philip arranged for his coronation, and became Philip V of France. He was challenged by the supporters of the Princess Joan, daughter of Louis X, on the basis of his right to the throne. In response, he convened an assembly of prelates, barons, and burgesses at Paris, who acknowledged him as their lawful king, and declared that "Women do not succeed to the throne of France." This was later said to have been based on the 5th century Salic law, but it is now known that the Salic Law was only rediscovered later and used by the lawyers of the Valois kings to fortify their masters' title with an additional aura of authenticity.[2]

At the time of Charles's death in 1328, there was once again a dispute over the succession. Although it had come to be accepted that a woman could not possess the French throne in her own right, Edward III, the nephew of the deceased king and thus the nearest adult male relative, based his claim on the theory that a woman could transmit a right of inheritance to her son. This claim was rejected by French jurists however, under the principle Nemo plus juris ad alium transfere potest quam ipse habet (no one can transfer a greater right to another than he himself has), and the throne was given to the male line heir, Philip, Count of Valois, a first cousin of the deceased king. At the time, Edward accepted this result, and paid homage to Philip VI for his Duchy of Aquitaine. However, in 1337, Edward, in his capacity as Duke of Aquitaine, refused to pay homage to Philip. The French king's response was to confiscate what was left of lands in English held Aquitaine, namely Gascony, thus precipitating the Hundred Years' War and Edward's revival of his claim to the throne and title of King of France in 1340.

The decision to assume the title of "King of France" was made at the solicitation of his Flemish allies, who had signed a treaty that they would no longer attack the French king. They said that if Edward took the French royal title, then the Flemish would be able to keep their honor, since they would not be attacking the "true King of France" (Edward III).

Nothing could have justified Edward's claim to the throne of France. Whether the Salic law was valid or not, there stood in his way the daughters of his royal uncles. Edward made a distinction, that although women were excluded, their male issue were not. Hence, while his mother may not be Queen of France, she could transmit the title to him. This was contrary to the most common rules of inheritance; but even if it were valid, then Charles II of Navarre, son of Joan II of Navarre and grandson of Louis X, would have been the rightful king, instead of Edward.

Edward continued to use this title until the Treaty of Brétigny on 8 May 1360, when he abandoned his claims in return for substantial lands in France. After the resumption of hostilities between the English and the French in 1369, however, Edward resumed his claim and the title of King of France. His successors also used the title until the Treaty of Troyes on 21 May 1420, in which the English recognised Charles VI as King of France, but with his new son-in-law King Henry V of England as his heir (disinheriting Charles VI's son, the Dauphin Charles). Henry V then adopted the title Heir of France instead.

Henry V and Charles VI died within two months of each other in 1422, and Henry V's infant son (Charles VI's grandson) Henry VI became King of France. He was the only English king who was de facto King of France, rather than using the style as a mere title of pretense. However, by 1429 Charles VII, with the support of Joan of Arc, had been crowned at Reims and begun to push the English out of northern France. In 1435, an end to the French civil war between Burgundians and Armagnacs allowed Charles to return to Paris the following year, and by 1453 the English had been driven out of their last strongholds in Normandy and Guyenne. The only French territory left to the English was Calais which they held until 1558.

Nonetheless the kings and queens of England (and, later, of Great Britain) continued to claim the French throne for centuries, through the early modern period. The words "of France" was prominently included among their realms as listed in their titles and styles, and the French fleur-de-lys were included in the royal arms. This continued until 1801, by which time France had no monarch, having become a republic.

Arms of Edward III, with the English lions and the French fleur-de-lys.

Coat of arms of the kings of England after 1405, with the French quarterings updated to the modern French arms, three fleurs-de-lis on a blue field.

The Royal Arms of England during Henry VI's reign

Following an episode of insanity on the part of Henry VI of England in 1453 and the subsequent outbreak of the Wars of the Roses (1455–87), the English were no longer in any position to pursue their claim to the French throne and lost all their land on the continent, except for Calais.

Calais was ruled by eight more English Kings and Queens of France until 1558:

Ill feeling between the two nations continued well into the 16th century. Calais was captured by French troops under Francis, Duke of Guise on 7 January 1558. Mary and Philip continued, however, to be styled Queen and King of France for the rest of her reign, as did Mary I's half-sister and successor Elizabeth I, despite her abandonment of her claims to Calais in the Treaty of Cateau-Cambrésis of 1559. Elizabeth I revived England's claims to Calais and took the French port of Le Havre in 1561. French forces ejected the English in 1563, and the Treaty of Troyes (1564), recognised French ownership of Calais, in return for payment to England of 120,000 crowns.[3]

Elizabeth died childless. Her successor was her cousin James VI of Scotland. The thrones of England and Scotland were joined in a dynastic union until 1707. The seven monarchs of this period continued to use the style King/Queen of France, though their claim was merely nominal. None of them was willing to engage in military campaigns for France against the actual Kings of France Henry IV, Louis XIII and Louis XIV of France. Indeed, Charles I married a sister of Louis XIII, and his son Charles II spent much of his exile during the Interregnum in France (at which time, even if not formally abandoning his claim for its throne, he certainly did not emphasise it).

The claimants of Great Britain

The Act of Union 1707 declared the joining of the Kingdom of England with the Kingdom of Scotland to a new Kingdom of Great Britain. The Kingdom had four Monarchs until 1801. They also styled themselves Queen/King of France; however, none of them actually questioned the rights of Louis XIV and his successors Louis XV, Louis XVI, Louis XVII and Louis XVIII: 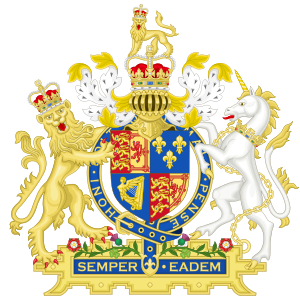 The French Revolution overthrew and abolished the monarchy on 21 September 1792 and replaced it with the French First Republic. During the peace negotiations at the Conference of Lille, lasting from July to November 1797, the French delegates demanded that the King of Great Britain abandon the title of King of France as a condition of peace.

In 1800, the Act of Union joined the Kingdom of Great Britain with the Kingdom of Ireland to a new United Kingdom of Great Britain and Ireland. George III chose this opportunity to drop his claim to the now defunct French throne, whereupon the fleurs de lis, part of the coat of arms of all claimant Kings of France since the time of Edward III, were also removed from the British royal arms. Britain recognised the French Republic by the Treaty of Amiens of 1802.

The change was not acknowledged by Jacobite claimant Cardinal Henry Benedict Stuart. He continued to formally style himself King of England, Scotland, France and Ireland until his death on 13 July 1807.

Although the fleurs-de-lys were completely removed from the Royal coat of arms of the United Kingdom, they were later included in the arms of Canada, the British dominion, where they symbolise the French population of Canada (Quebec), not the former British claim to the French throne.[4]

While the position of King of France was restored in 1814 (and later abolished for the final time in 1848) the British monarchs after then did not pursue the claim to the French throne.

James II for the last twelve years of his life and his son, the Old Pretender, until the Treaty of Utrecht in 1713, were actually pensioners of Louis XIV at the very time they were claiming his title.

The Jacobite succession has continued since 1807 but none of the eight subsequent holders of the claims has actively pursued them. They continue to be customarily known as "King (or Queen) of France" by the Jacobites.

The heir presumptive of the Jacobite claim is Franz's younger brother

In addition two failed claimants to the throne of England were also styled King of France. They are usually omitted from regnal lists.