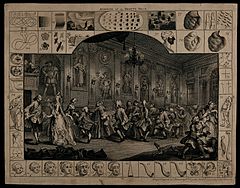 A country dance is any of a large number of social dances of the British Isles in which couples dance together in a figure or "set", each dancer dancing to his or her partner and each couple dancing to the other couples in the set.[1] A set consists most commonly of two or three couples, sometimes four and rarely five or six. Often dancers follow a "caller" who names each change in the figures.

Introduced to France and then Germany and Italy in the course of the 17th century, country dances gave rise to the contradanse, one of the significant dance forms in classical music. Introduced to America by English immigrants, it remains popular in the United States of America as contra dance and had great influence upon Latin American music as contradanza. The Anglais (from the French word meaning "English") or Angloise is another term for the English country dance.[2][3] A Scottish country dance may be termed an Ecossaise. Irish set dance is also related.

The term "country dance" may refer to any of a large number of figure-dances that originated on village greens.[4] The term applies to dances in line formation, circle dances, square dances and even triangular sets for three couples.

However the most common formation is the "longways" set in which men and women form two lines facing each other. The "Roger de Coverley", which was for some time the only well-known country dance in England, and "The Grand Old Duke of York" are among the most familiar examples of this kind of dance. Couples form two lines along which each travels at the end of each iteration of figures, meeting new couples and repeating the series of figures many times. Alternatively, dances can be finite, a set forming an independent unit within which the series of figures is repeated a limited number of times. These dances are often non-progressive, each couple retaining their original positions.

Country dancing is intended for general participation, unlike folk dances such as clogging, which are primarily concert dances, and ballroom dances in which dancers dance with their partners independently of others. Bright, rhythmic and simple, country dances had appeal as a refreshing finale to an evening of stately dances such as the minuet.[4] 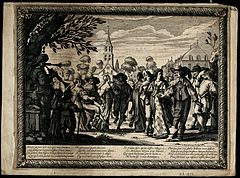 Country dances began to influence courtly dance in the 15th century[5] and became particularly popular at the court of Elizabeth I of England. Many references to country dancing and titles shared with known 17th-century dances appear from this time, though few of these can be shown to refer to English country dance. While some early features resemble the morris dance and other early styles, the influence of the courtly dances of Continental Europe, especially those of Renaissance Italy, may also be seen, and it is probable that English country dance was affected by these at an early date.[6] Little is known of these dances before the mid-17th century.[7]

John Playford's The English Dancing Master (1651) listed over a hundred tunes, each with its step. This was enormously popular, reprinted constantly for 80 years and much enlarged. Playford and his successors had a practical monopoly on the publication of dance manuals until 1711, and ceased publishing around 1728. During this period English country dances took a variety of forms including finite sets for two, three and four couples as well as circles and squares. 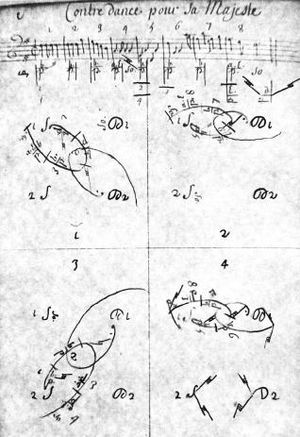 Lorin's contradanse choreography, one of the earliest western dance notations

The country dance was introduced to the court of Louis XIV of France, where it became known as contredanse, and later to Germany and Italy. André Lorin, who visited the English court in the late 17th century, presented a manuscript of dances in the English manner to Louis XIV on his return to France. In 1706 Raoul Auger Feuillet published his Recüeil de Contredances, a collection of "contredanses anglaises" presented in a simplified form of Beauchamp-Feuillet notation and including some dances invented by the author as well as authentic English dances. This was subsequently translated into English by John Essex and published in England as For the Further Improvement of Dancing.[8]

By the 1720s the term contradanse had come to refer to longways sets for three and two couples, which would remain normative until English country dance's eclipse.[9] The earliest French works refer only to the longways form as contradanse,[10] which allowed the false etymology of "a dance in which lines dance opposite one another".[4] The square-set type also had its vogue in France during the later 18th century as the quadrille[11] and the cotillion. These usually require a group of eight people, a couple along each side. "Les Lanciers", a descendant of the quadrille, and the "Eightsome Reel" are examples of this kind of dance. Dancing in square sets still survives in Ireland, under the name "set dancing" or "figure dancing".

For some time British publishers issued annual collections of these dances in popular pocket-books. Jane Austen, Charles Dickens and Thomas Hardy all loved country dancing and put detailed descriptions into their novels. But the vogue for the waltz and the quadrille ousted the country dance from English ballrooms in the early 19th century, though Scottish country dance remained popular.[4][9] 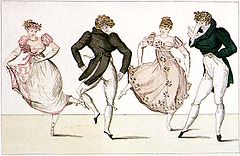 The "La Trénis" figure of the Contredanse, an illustration from Le Bon Genre, Paris, 1805

The French contredanse, arriving independently in the American colonies, became the New England contra dance, which experienced a resurgence in the mid-20th century. The quadrille evolved into square dance in the United States while in Ireland it contributed to the development of modern Irish set dance. English country dance in Scotland developed its own flavour and became the separate Scottish country dance. English Ceilidh is a special case, being a convergence of English, Irish and Scottish forms. In addition certain English country dances survived independently in the popular repertoire. One such is the Virginia Reel, which is almost exactly the same as the 'Sir Roger de Coverley'.

The contradanza, the Spanish and Spanish-American version of the French contradanse, became an internationally popular style of music and dance in the 18th century. The contradanza was popular in Spain and spread throughout Spanish America during the 18th century, where it took on folkloric forms that still exist in Mexico, Venezuela, Colombia, Peru, Panama and Ecuador. In Cuba during the 19th century the contradanza became an important genre, the ancestor of danzon, mambo and cha cha cha. Haitians fleeing the Haitian Revolution of 1791 brought to the Cuban version a Creole influence and a new syncopation.[12][13]

The Engelska (Swedish for "English") or Danish Engelsk is a 16-bar Scandinavian folk dance in 2/4.[14] Its name comes from the adoption in Scandinavia of English country dances and contra dances in the early 19th century. In Denmark the description "Engelsk" was used for both line and square dances of English origin.[15] Only due to the efforts of Cecil Sharp, Mary Neal and the English Folk Dance and Song Society in the late 19th and early 20th century did a revival take place, so that for some time schoolchildren were taught country dances. In the early 20th century, traditional and historical dances began to be revived in England. Neal, one of the first to do so, was principally known for her work in ritual dances, but Cecil Sharp, in the six volumes of his Country Dance Book, published between 1909 and 1922, attempted to reconstruct English country dance as it was performed at the time of Playford, using the surviving traditional English village dances as a guide, as the manuals defined almost none of the figures described. Sharp and his students were, however, almost wholly concerned with English country dances as found in the early dance manuals:[16] Sharp published 160 dances from the Playford manuals and 16 traditional village country dances. Sharp believed that the Playford dances, especially those with irregular forms, represented the original "folk" form of English country dance and that all later changes in the dance's long history were corruptions.[17] This view is no longer held.