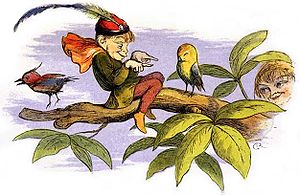 English folklore is the folk tradition which has developed in England over a number of centuries. Some stories can be traced back to their roots, while the origin of others is uncertain or disputed. England abounds with folklore, in all forms, from such obvious manifestations as the traditional Robin Hood tales, the Brythonic-inspired Arthurian legend, to contemporary urban legends and facets of cryptozoology such as the Beast of Bodmin Moor.

Whereas some traditions were once believed across the whole of England, most belong to specific regions:

Folklore found throughout much of England

Shown on old maps they are usually shown as faces blowing out wind from their mouths. There are generally 4 of them (North Wind, South Wind, East Wind and West Wind) although in some cases only 2 are shown and in others the whole outside of the map has been surrounded by smaller heads with 4 larger ones.

The tale tells how a new bride, playing a game of hide-and-seek during her wedding breakfast, hid in a chest in an attic and was unable to escape. She was not discovered by her family and friends, and suffocated. The body was allegedly found many years later in the locked chest.

Folklore of London and the South East

Folklore of the Midlands

Folklore of Yorkshire and the North East

Folklore of the North West

Folklore of the South West

Remnants of paganism in English Folklore

Many parts of English and British folklore still contain evidence of Europe’s pre-Christian past. In common with most other regions of Europe, some aspects of past Pagan religions survive in English Folklore.

Examples are this include the Wild Hunt and Herne the Hunter which relate to the Germanic deity Woden. The Abbots Bromley Horn Dance may represent a pre-Christian festival and the practice of Well dressing in the Peak District which may date back to Anglo-Saxon or even Celtic times. May Day celebrations such as the Maypole survive across much of England and Northern Europe.

English folklore in other media

English folklore crops up in books, films and comic books and these appearances include: