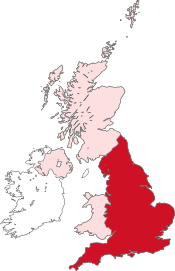 English independence is a political stance advocating secession of England, the largest and most populous country of the British Isles, from the United Kingdom. Support for secession of England has been influenced by the increasing devolution of political powers to Scotland, Wales and Northern Ireland, where independence from the United Kingdom is a prominent subject of political debate.[1][2][3]

English independence is seen by its advocates as a way to resolve the West Lothian question in British politics: Scottish, Welsh and Northern Irish MPs in the Parliament of the United Kingdom at Westminster can vote on matters affecting England, while English MPs do not have the same power over equivalent issues in Scotland, Wales and Northern Ireland, as these powers are devolved to the Scottish Parliament, Northern Ireland Assembly or the National Assembly for Wales.[4][5]

The English national identity developed over a long period of time. The Kingdom of England came into being in the 10th century: it spanned much of the southern two-thirds of Great Britain and a number of smaller outlying islands. The Norman conquest of Wales from 1067–1283 (formalized by the Statute of Rhuddlan in 1284) placed Wales under English control, and Wales came under English law with the Laws in Wales Acts 1535–1542, which disestablished the Principality of Wales.

In 1603, the Union of the Crowns took place when the death of Elizabeth I resulted in James VI, King of Scots, acceding to the English throne, placing England and Scotland under personal union. In 1707, the Acts of Union were passed by both the Parliament of England and the Parliament of Scotland, forming the Kingdom of Great Britain. The measure was deeply unpopular in both Scotland and England. The Scottish signatories to the Act were forced to sign the documents in secrecy because of mass rioting and unrest in the Scottish capital, Edinburgh. Scotland did however retain Scots law, a legal system distinct from that used in England and Wales.

The English nationalist movement has its roots in a historical legacy which predates the United Kingdom and which is quite capable of including new entrants to the country of England.[clarification needed] The rise in English identity in recent years, as evidenced by the increased display of the English flag (particularly during international sporting competitions and in relation to their football team), is sometimes attributed in the media to the increased devolution of political power to Scotland, Wales and Northern Ireland. One possible incentive for the establishment of self-governing English political institutions is the West Lothian question: the constitutional inconsistency whereby MPs from all four nations of the UK can vote on matters that solely affect England, while those same matters are reserved to the devolved assemblies of the other nations. (For example, the Scottish MP for West Lothian has a say on policing in the West Midlands.)

Contemporary English nationalist movements differ significantly from mainstream Scottish, Welsh and Cornish nationalist movements (whilst similar to some strands of Irish nationalism) insofar as they are often associated with support for right-of-centre economic and social policies. Nationalists elsewhere in the UK tend towards a social democratic political stance. English nationalism is also often associated with Euroscepticism: one reason for opposition to the EU is the view that England is being arbitrarily subdivided into regions at the behest of the European Union.

Polling data for English devolution and independence may be found in the table below.