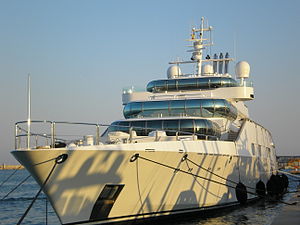 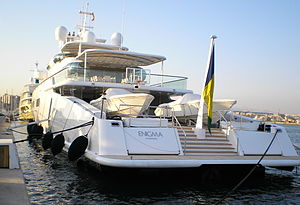 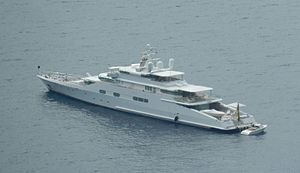 Enigma (formerly ECO and Katana) is one of the world's largest private superyachts. According to Power and Motoryacht magazine, she is owned by Aidan Barclay, son of the British media tycoon David Barclay, who recently purchased the Telegraph newspaper. She was sold after her former owner, Larry Ellison, took delivery of Rising Sun, the 6th largest private yacht in the world. Measuring slightly more than 244 feet (or around 75 metres), Enigma was launched in 1991 and originally christened ECO by its former owner, Mexican mogul Emilio Azcárraga, founder and former CEO of TV and media conglomerate Televisa. Enigma is renowned for her design, including a pyramidal superstructure surrounded by convex windows and an agile design that enables her to achieve a maximum speed of 36 knots.[1][2] The yacht contains 9 luxurious suites and the rear deck was originally designed to carry a Maule turboprop floatplane.

She was built by German shipyards Blohm & Voss and designed by Martin Francis.[3]

Enigma is powered by two Deutz AG BV16M628 diesel engines each producing 5,000 horsepower and one GE LM1600 gas turbine producing 18,500 horsepower.[4] Each engine drives its own water jet drive. Because of the amount of fuel consumed when using the turbine engine for full speed cruising, the owner also commissioned a fuel tanker to provide refueling capabilities mid-journey.[2]