listen (help·info) (Sicilian: Castrugiuvanni; Greek: Ἔννα; Latin: Henna and less frequently Haenna) is a city and comune located roughly at the center of Sicily, southern Italy, in the province of Enna, towering above the surrounding countryside. It has earned the nicknames "belvedere" (panoramic viewpoint) and "ombelico" (navel) of Sicily.

At 931 m (3,054 ft) above sea level, Enna is the highest Italian provincial capital. Until 1926 the town was known as Castrogiovanni.

Enna is situated near the center of the island; whence the Roman writer Cicero called it Mediterranea maxime, reporting that it was within a day's journey of the nearest point on all the three coasts. The peculiar situation of Enna is described by several ancient authors, and is one of the most remarkable in Sicily. The ancient city was placed on the level summit of a gigantic hill, surrounded on all sides with precipitous cliffs almost wholly inaccessible. The few paths were easily defended, and the city was abundantly supplied with water which gushes from the face of the rocks on all sides. With a plain or table land of about 5 km in circumference on the summit, it formed one of the most remarkable natural fortresses in the world.

Archaeological excavations have revealed artifacts dating from the 14th century BC, proving human presence in the area since Neolithic times. A settlement from before the 11th century BC, assigned by some to the Sicanians, has been identified at the top of the hill; later it was a center of the Sicels.

In historical times, Enna became renowned in Sicily and Italy for the cult of the goddess Demeter (the Roman Ceres). Her grove was known as the umbilicus Siciliae ("The navel of Sicily"). Ceres' temple in Henna was a famed site of worship.[1]

The origin of the toponym Henna remains obscure. 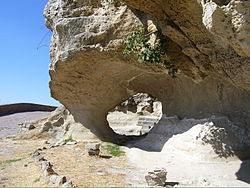 The Rock of Ceres, an important site for devotion to the goddess.

Dionysius I of Syracuse repeatedly attempted to take over Enna. At first he encouraged Aeimnestus, a citizen of Enna, to seize the sovereign power. Afterward Dionysius I turned against him and assisted the Ennaeans to get rid of their despot. But it was not till a later period that, after repeated expeditions against the neighbouring Sicilian cities, Dionysius took control of by betrayal.

Agathocles later controlled Enna. When the Agrigentines under Xenodicus began to proclaim the restoration of the other cities of Sicily to freedom, the Ennaeans were the first to join their standard, and opened their gates to Xenodicus, 309 BC. Accounts of the First Punic War repeatedly refer to Enna; it was taken first by the Carthaginians under Hamilcar, and subsequently recaptured by the Romans, but in both instances by treachery and not by force.

In the Second Punic War, while Marcellus was engaged in the siege of Syracuse (214 BC), Enna became the scene of a fearful massacre. The defection of several Sicilian towns from Rome had alarmed Pinarius the governor of Enna. In order to forestall any treachery, he used the Roman garrison to kill the citizens, whom he had gathered in the theater, and killed them all. The soldiers were allowed to plunder the city.

Eighty years later Enna was the center of the First Servile War in Sicily (134 BC-132 BC), which erupted under the lead of Eunus, a former slave. His forces took over Enna. It was the last place that held out against the proconsul Rupilius, and was at length betrayed into his hands. According to Strabo, the city suffered much damage after the Romans regained control. He believed this was the start of its decline.

Cicero referred to it repeatedly in a way to suggest that it was still a flourishing municipal town: it had a fertile territory, well-adapted for the growth of cereal grains, and was diligently cultivated till it was rendered almost desolate by the exactions of Verres. From this time little is known about Enna: Strabo speaks of it as still inhabited, though by a small population, in his time: and the name appears in Pliny among the municipal towns of Sicily, as well as in Ptolemy and the Itineraries.

When the Roman Empire was divided in 395AD, Sicily became part of the Western Roman Empire. The noted senatorial family of the Nicomachi had estates in Sicily. Around 408 the politician and grammarian Nicomachus Flavianus worked on an edition of the first 10 books of Livy during a stay on his estate in Enna. This was recorded in the subscriptions of the manuscripts of Livy.

After the fall of the Western Roman Empire, Enna flourished throughout the Middle Ages as an important Byzantine stronghold. In 859, in the course of the Islamic conquest of Sicily, after several attempts and a long siege, the town was taken by Muslim troops. They entered one by one through a sewer to breach the town's defenses. The Arabic name for the city, Qas'r Ianni (Fort of John), was a combination of "qas'r" (a corruption of the Latin "castrum", fort), and "Ianni", a corruption of "Henna". The city retained its name in the native dialect of Sicily as Castro Janni (Castrogiovanni) until Benito Mussolini ordered renaming in 1927.

The Normans captured Enna in 1087. Frederick II, Holy Roman Emperor and King of Sicily, established a summer residence here, which is now called the "Torre di Federico" (Frederick Tower). Troops of North Italian soldiers,[2] from regions such as Lombardy, Piedmont, Liguria and Emilia-Romagna, came to settle in the city and neighbouring towns such as Nicosia and Piazza Armerina. Gallo-Italic dialects are still spoken in these areas, dating from this early occupation.

Enna had a prominent role in the Sicilian Vespers that lead to the Aragonese conquest of Sicily, and thenceforth enjoyed a short communal autonomy. King Frederick III of Sicily favored it and embellished the city; it suffered a period of decay under the Spanish domination. It was restored as provincial capital in the 1920s. In 2002 it became a university city.

The citizens of the city have a high incidence of multiple sclerosis (MS), a disease seen more frequently among people of North European extraction; perhaps this is related to the Norman immigration. MS is also prevalent in Sardinia, which has the second highest incidence in the Mediterranean basin.[3] 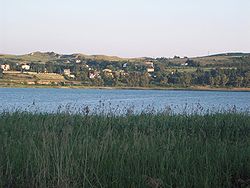 The Lake of Pergusa, the mythological location of the Rape of Persephone.

The neighborhood of Enna is celebrated in myth as the place whence Persephone (Latin: Proserpine) was carried off by Pluto, god of the underworld.[4] The spot assigned by local tradition as the scene of this event was a small lake surrounded by lofty and precipitous hills, about 8 km from Enna. The meadows abound in flowers, and a nearby cavern or grotto was believed to be where the king suddenly emerged. This lake is called "Pergus" by Ovid [5] and Claudian.[6] Neither Cicero nor Diodorus refers to any lake in relation to this myth. The former says that around Enna were lacus lucique plurimi, et laetissimi flores omni tempore anni.[7] Diodorus describes the spot whence Persephone was carried off as a meadow so full of fragrant flowers that hounds could not follow their prey. He described the meadow as enclosed on all sides by steep cliffs, and having groves and marshes in the neighborhood, but does not refer to a lake.[8] Both he and Cicero allude to a cavern, as if describing a definite site. In the 21st century, a small lake is found in a basin-shaped hollow surrounded by great hills, and a cavern near is noted as that described by Cicero and Diodorus. But much of the flowers and trees had disappeared by the 19th century, when travelers described the area as bare and desolate.[9]

Both Ceres and Persephone were worshipped in Enna. Cicero said that the temple of Ceres was of such great antiquity and sanctity that Sicilians went there filled with religious awe. Verres looted from it a bronze image of the deity, the most ancient as well as the most venerated in Sicily.[10] No remains of this temple are now visible. Standing on the brink of the brink of the precipice, it fell with a great rockfall from the edge of the cliff.[11] Other remnants of classical antiquity were likely destroyed by the Saracens, who erected the castle and several other of the most prominent buildings of the modern city.[12]

Coins minted for Enna under the Roman dominion still exist, carrying the legend "MUN. (Municipium) HENNA". The aspirated form of the name confirms the authority of Cicero, whose manuscripts give that form.[13] The most ancient Greek coin of the city also gives the name "ΗΕΝΝΑΙΟΝ".[14] Scholars have concluded that this form, Henna, of the ancient name is the more correct for its time, though Enna is the more usual.

Enna is now an important center for archaeological and educational studies. The Kore University of Enna was officially founded in 2002. 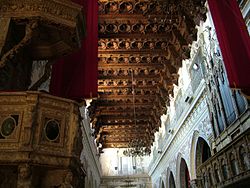 Interior of the Cathedral of Enna.

The most important monuments of Enna are: 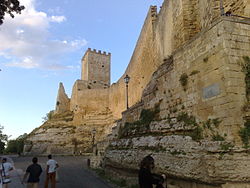 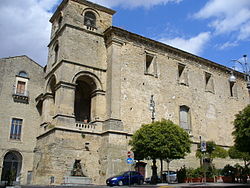 The Church of Saint Francis of Assisi, in the Piazza Vittorio Emanuele II 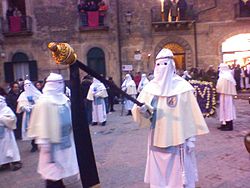 The Holy Week procession of the Confraternities in Enna.

Lake Pergusa (Latin: Pergus lacus or Hennaeus lacus) lies between a group of mountains in the chain of Erei, about 5 km from Enna. It is part of an important migratory flyway for many species of birds. The Pergusa nature reserve also has numerous species of mammals, reptiles, amphibians and invertebrates.

Around the lake is the most important racing track of Southern Italy, the Autodromo di Pergusa. It has hosted international competitions and events, such as Formula One, Formula 3000, and a [Ferrari Festival] with Michael Schumacher.

Near Pergusa lake is the archaeological site known as Cozzo Matrice. These are the remains of an ancient prehistoric fortified village, with walls dating about 8000 BC. Other remains, dating to more than 2000 years ago, are a sacred citadel, a rich necropolis, and the remains of an ancient temple dedicated to Demeter. Pergusa is strongly linked to the myth of the Greek Persephone, Demeter's daughter, who was kidnapped from here by Pluto and taken to Hades, the underworld, for part of the year. From that captivity, seasons arose.

The Köppen Climate Classification subtype for this climate is "Csa" (Mediterranean Climate).[15]