From Infogalactic: the planetary knowledge core
(Redirected from Enolate)
Jump to: navigation, search

Generic Tautomerization Forming an Enol. Keto-form at left, enol at right. The α-hydrogen (H) deprotonated in the common base-catalysed reaction is indicated. R3=H, aldehyde case; R3=alkyl, ketone case; etc.. Groups R1 and R2 may be a variety of structures that influence the equilibrium, including alkyl, carbonyl-containing (for stabilized enols), and hydroxyl groups (in enediols).[citation needed]
Keto-Enol Examples

Enols, or more formally, alkenols, are a type of reactive structure or intermediate in organic chemistry that is represented as an alkene (olefin) with a hydroxyl group attached to one end of the alkene double bond. The terms enol and alkenol are portmanteaus deriving from "-ene"/"alkene" and the "-ol" suffix indicating the hydroxyl group of alcohols, dropping the terminal "-e" of the first term. Generation of enols often involves removal of a hydrogen adjacent (α-) to the carbonyl group—i.e., deprotonation, its removal as a proton, H+. When this proton is not returned at the end of the stepwise process, the result is an anion termed an enolate (see images at right). The enolate structures shown are schematic; a more modern representation considers the molecular orbitals that are formed and occupied by electrons in the enolate. Similarly, generation of the enol often is accompanied by "trapping" or masking of the hydroxy group as an ether, such as a silyl enol ether.[1]

Critically, the terminus of the double bond in enols, enolates, and silyl enol ethers that lacks the hydroxyl group is nucleophilic, and so can act as an electron donor in reactions with electrophilic organic compounds; this reactivity underlies the tremendous importance of enol-based intermediates in a wide array of important life processes (i.e., in biochemistry, as intermediates in enzyme-catalysed reactions), as well as being central to modern synthetic organic chemistry (e.g., in applications of aldol and related reactions). The importance of enols in accomplishing nature and humankind's chemical transformations makes them irreplaceable.

The process to form enols and related structures requires at least one hydrogen atom on a carbon adjacent to a carbonyl group, a requirement that is met in various aldehyde, ketone, ester, and other more complicated organic compounds, including many carbocycles and heterocycles.The process by which they form, keto-enol tautomerization, is an isomerization of a parent organic compounds, involving interconversion via formal migration of a hydrogen atom accompanied by switch of adjacent single and double bonds, in this case, the hydrogen atom in the position immediately adjacent (α-) to the carbonyl group, as was shown and discussed above.

The types and sizes of the substituents in the vicinity of the enol and enolate (e.g., R1, R2, and R3 in the image above), and the particulars of reaction solvent, additives, and temperature contribute to the stability of the enol-type isomer, and fix the point at which an equilibrium lies, and for enols, the ability of the enol's hydroxyl group to hydrogen bond with an adjacent group can make it the preponderant isomer in solution (e.g., 3:1 and more over the keto form). Moreover, the substituents and conditions determine the preponderant conformations of these reactive species, and therefore dictate the stereochemical outcomes of their reactions.[citation needed] In biochemical transformations, the control of such reactions has been understood as exquisite for as long as the reactions have been studied, and in modern chemical syntheses the same control is increasingly being achieved by man.[citation needed] Likewise, more complex substituents contribute to further unique reactivities, such as in enediols, alkenes with two hydroxyl groups, one on each end of the double bond, which appear in such structures as that of vitamin C, and contribute to its important redox properties.

Tautomers are constitutional isomers of organic compounds that can interconvert via the formal migration of a hydrogen atom or proton, accompanied by a switch of a single bond and adjacent double bond.[2][3] As indicated in the opening image above, carbonyl compounds that have an α-hydrogen atom adjacent to a carbonyl group—like organic esters, ketones, and aldehydes—often display such an equilibrium. The examples of the 3-pentanone and 2,4-pentanedione tautomerization equilibrium appear in the gallery of images above. In the case of ketones, it is formally called a keto-enol tautomerism, though this name is often more generally applied to all such tautomerizations.

Malondialdehyde (propanedial) enolization. An example of a 1,3-dicarbonyl compound whose enol is stabilized by hydrogen bonding, leading to detection of a percent or less of the keto form at equilibrium.

In organic compounds with two (or more) carbonyls, the enol constitutional isomer may be stabilized. In particular, this occurs in cases like 1,3-dicarbonyl compounds—see the examples of 2,4-pentanedione and tartronaldehyde in the opening image gallery—that is, when two carbonyl groups are separated in the structure by a single methylene- or methine-type (-CHR-) group [i.e., have the structure -C(O)-CHR-C(O)-, where R=H, alkyl, or other groups].[citation needed] Hence, while one α-hydrogen is required (see opening image gallery), the second substituent in the α-position may be variable.[citation needed]

When keto-enol tautomerism occurs the keto or enol is deprotonated and an anion, which is called the enolate, is formed as intermediate. Enolates can exist in quantitative amounts in strictly Brønsted acid free conditions, since they are generally very basic. In enolates the anionic charge is delocalized over the oxygen and the carbon.[4] Enolate forms can be stabilized by this delocalization of the charge over three atoms.[citation needed] 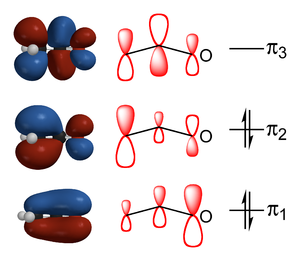 In valence bond theory, the enolate structure and stability is explained by a phenomenon known as resonance. The two resonance structures shown here constitute the resonance hybrid. In molecular orbital theory, it is represented by three delocalized molecular orbitals, two of them filled.[dubious – discuss][clarification needed]

In ketones with α-hydrogens on both sides of the carbonyl carbon, selectivity of deprotonation may be achieved to generate two different enolate structures. At low temperatures (-78 °C, i.e. dry ice bath), in aprotic solvents, and with bulky non-equilibrating bases (e.g. LDA) the "kinetic" proton may be removed. The "kinetic" proton is the one which is sterically most accessible. Under thermodynamic conditions (higher temperatures, weak base, and protic solvent) equilibrium is established between the ketone and the two possible enolates, the enolate favoured is termed the "thermodynamic" enolate and is favoured because of its lower energy level than the other possible enolate.[clarification needed] Thus, by choosing the optimal conditions to generate an enolate, one can increase the yield of the desired product while minimizing formation of undesired products.

Conversion of ascorbic acid (vitamin C) to an enolate. Enediol at left, enolate at right, showing movement of electron pairs resulting in deprotonation of the stable parent enediol. A distinct, more complex chemical system, exhibiting the characteristic of vinylogy.

Enediols with a carbonyl group adjacent to the enediol group are called reductones. The enediol structure is stabilized by the resonance resulting from the tautomerism with the adjacent carbonyl. Therefore, the chemical equilibrium produces mainly the enediol form rather than the keto form. Reductones are strong reducing agents, thus efficacious antioxidants, and fairly strong acids.[5] Examples of reductones are tartronaldehyde, reductic acid and ascorbic acid.