The Enrollment Act, 12 Stat. 731, enacted March 3, 1863, also known as the Civil War Military Draft Act,[1] was legislation passed by the United States Congress during the American Civil War to provide fresh manpower for the Union Army. A form of conscription, the controversial act required the enrollment of every male citizen and those immigrants who had filed for citizenship between ages twenty and forty-five. Federal agents established a quota of new troops due from each congressional district. In some cities, particularly New York City, enforcement of the act sparked civil unrest as the war dragged on, leading to the New York City draft riots on July 13–16. It replaced the previous Militia Act of 1862. 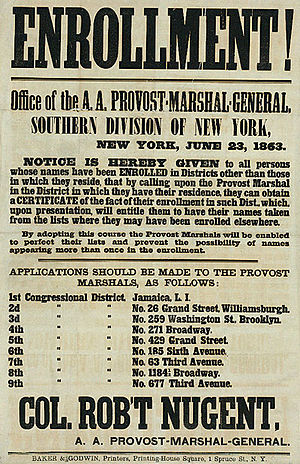 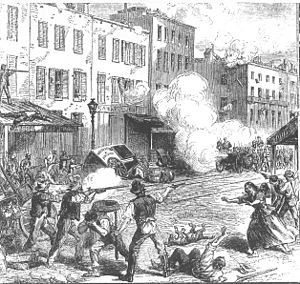 The policies of substitution and commutation were controversial practices that allowed drafted citizens to opt out of service by either furnishing a suitable substitute to take the place of the draftee or paying $300. Both provisions were created with the intention of softening the effect of the draft on pacifists, the antidraft movement, and the propertied classes. The result however was general public resentment of both policies. The two practices were major points of contention among the general public and led directly to the slogan "rich man's war, poor man's fight."

The policy of substitutions was continued throughout the war. The problem with substitution was that it provided substitutes with powerful incentives to desert soon after enlisting. Career "jumpers" made a living off of enlisting as a substitute, collecting their compensation, deserting before their units were dispatched to the front, and repeating the process. The problem was well known to the military commanders who regularly saw the same recruits repeatedly. In addition, troops furnished by substitution were considered to be of an inferior quality in comparison to regulars and volunteers.

Commutation (paying $300 to escape the draft) was created in an effort to keep substitution prices low. If commutation were not instated, the price of a substitute would have quickly soared past $300. Also, commutation was intended to raise money for the war effort. While commutation raised war funds, it was often a criticism of the draft that it was better at raising money than troops. The rationalization for commutation was that unwilling troops were ineffective so the government might as well extract funds from the unwilling if it got poor service. Despite the good intentions behind commutation, it was one of the most hated policies of the war.

Congress passed an amendment to the Enrollment Act in 1864. Section 5 limited the length of an exemption from the draft by payment of a commutation fee to one year. Then, those drafted were required to serve or to furnish substitutes.[2]