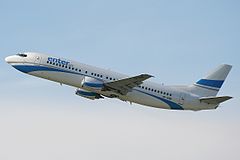 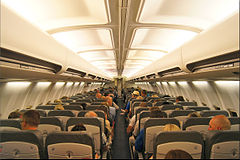 Enter Air Sp. z o.o. is a charter airline with its head office in the Zephirus Building of the Okęcie Business Park in Warsaw, Poland.[3] Enter Air has three bases in: Warsaw Frédéric Chopin Airport, Katowice International Airport and Poznań-Ławica Airport. It also operates holiday and charter flights out of other Polish and European airports.

Enter Air performed its first commercial flight on 25 April 2010. The airline cooperates with major tour operators in Poland and is the largest Polish charter airline in terms of number of aircraft and passenger volumes.[citation needed]The airline operates according to a low cost model which helped it grow over 300% between 2010 and 2012, despite the rising fuel prices and the events in Tunisia and Egypt (Q1 2011), which made many airlines reduce their fleet or even disappear from the market.

One more aircraft (Airbus A320 registered as YL-LCM) was leased from SmartLynx.