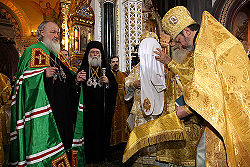 Enthronement of the Patriarch of Moscow and All the Russias

An enthronement is a ceremony of inauguration, involving a person—usually a monarch or religious leader—being formally seated for the first time upon their throne. This ritual is generally distinguished from a coronation because there is no crown or other regalia that is physically bestowed upon the one being enthroned, though regalia may be present at the ceremony. Enthronements occur in both church and state settings, since the throne is seen as a symbol of authority, both secular and spiritual.

Enthronements are most popular in religious settings, as a chair is seen as the symbol of the authority to teach.[1] Thus in Christianity, bishops of almost all denominations have a ceremony of enthronement after they assume office or by which they assume office. Orthodox Churches and the Anglican Church often have elaborate ceremonies marking the inauguration of their episcopates.

However, in the Roman Catholic Church the rite of enthronement is limited to Eastern Catholic Churches. In these, enthronement is the rite by which a new bishop assumes authority over his eparchy and before which he is forbidden to intervene in its governance in any way, whether personally or by proxy.[2] The overwhelmingly majority Latin Rite of the Roman Catholic Church has no ceremony of enthronement, although when a bishop is ordained in a church of the diocese he is to head, the principal consecrator invites him, after his investiture with mitre and crozier, to be seated on the cathedra of the church; if the ordination takes place elsewhere, the principal consecrator invites him merely to take first place among the concelebrating bishops.[3] Instead of by enthronement, a Latin-Rite bishop takes office through an officially recorded presentation of the papal bull of his appointment, a ceremony that does not necessarily involve his personal presence.[4] In the section in the Caeremoniale Episcoporum on "The Reception of a Bishop in His Cathedral Church" there is no mention of a ritual taking possession of the episcopal cathedra.[5] The same is true even of older editions of this work.[6]

Popes were traditionally enthroned and crowned with the papal tiara in the Archbasilica of St. John Lateran. However, during the Avignon papacy the papacy could not make use of its cathedra, as the Pope was in France while the cathedral was in Rome. Thus the coronations continued, while enthronements could not take place until the Pontiffs' return to Rome. Upon the return of Pope Gregory XI to Rome, the Lateran Palace was badly in need of repair, so the Pope made the Vatican his residence and transferred coronations to Saint Peter's Basilica. However, the Lateran Basilica is the cathedral of Rome, so enthronements continued there, with brief interruptions (see prisoner in the Vatican).

Today, "a solemn ceremony of the inauguration of the pontificate" is held after the election of a pope and only later, "within an appropriate time", the new pope "take(s) possession of the Patriarchal Archbasilica of the Lateran, according to the prescribed ritual", which includes taking his seat upon the episcopal cathedra and which can therefore be considered a form of enthronement.[7]

Previously, most monarchial investiture ceremonies were not enthronements, but coronations, where the ruler was physically crowned and invested with other items of regalia, since in most cases the monarch already had already been seated on their throne upon accession. Now that coronations have fallen out of favor in most countries, enthronement is often used instead since the throne of the monarch remains. While no Norwegian monarch has been crowned in nearly a century, the modern ceremony used to inaugurate their reign is often referred to as an enthronement, as is the formal inauguration ceremony of monarchs of Japan,[8] Sweden, Belgium and the Netherlands. However, the term "coronation" is still sometimes used to describe these ceremonies, even though they are not coronations in the truest sense of the word.

Belgium has no physical crown (except as a heraldic emblem); the monarch's formal installation requires only a solemn oath on the constitution in parliament, symbolic of the limited power allowed to the king under the 1831 Constitution. During the enthronement of King Albert II, a member of the Chamber of Representatives, Jean-Pierre Van Rossem, shouted out "Long live the Republic of Europe!", only to be shouted down by the others, who cried "Vive le Roi!". A similar protest had occurred during the 1950 enthronement of King Baudouin.[9]

The Emperor of Japan attends an enthronement ceremony soon after his accession; the last such ritual was held in 1990 for the current sovereign, Akihito. The Imperial Regalia consists of a sword, known as Kusanagi, a jewel, known as Yasakani no magatama, and a mirror, called Yata no Kagami. Unlike most other monarchies, Japan has no crown for its ruler.

This ancient rite was held in Kyoto, the former capital of Japan, until 1990 when the enthronement ceremony for Emperor Akihito took place at the Imperial Palace in Tokyo. The ceremony is not public, and the regalia itself are generally seen only by the emperor himself and a few Shinto priests. However, an account in Time from the enthronement of Akihito's father Hirohito in 1928 reveals a few details. First is a three-hour ceremony in which the emperor ritually informed his ancestors that he had assumed the throne. This was followed by the enthronement itself, which took place in an enclosure called the Takamikura, which contained a great square pedestal upholding three octagonal pedestals topped by a simple chair. This was surrounded by an octagonal pavilion with curtains, surmounted by a great golden phoenix.[10]

The new emperor proceeded to the chair, where after being seated, the Kusangi and Yasakani no magatama were placed on stands next to him. A simple shaku (a flat wooden baton or sceptre) was presented to the monarch, who faced his Prime Minister standing in an adjacent courtyard, representing the Japanese people. The emperor offered an address announcing his accession to the throne, calling upon his subjects to single-mindedly assist him in attaining all of his aspirations. The Prime Minister replied with an address promising fidelity and devotion, followed by three shouts of "Banzai" from all of those present. The timing of this last event was synchronized, so that Japanese around the world could join in the "Banzai" shout at precisely the moment that it was being offered in Kyoto.[10] In 1990 after the shouts of Banzai, a 21 gun salute fired out from the grounds of the palace a short distance away.

After this ceremony, the new Emperor gave offerings to Amaterasu, offering rice specially prepared for the occasion. This was followed by three banquets and a visit to the Shrines of his ancestors.[10]

The Grand Duke of Luxembourg is enthroned at a ceremony held in the nation's parliament at the beginning of his or her reign. The monarch takes an oath of loyalty to the state constitution, then attends a solemn mass at the Notre-Dame Cathedral. No crown or other regalia exists for the rulers of Europe's last sovereign Grand Duchy.

The new ruler of Malaysia is enthroned in a special ceremony after his election, which involves usage of several items of regalia including the Tengkolok Diraja, or Royal Headdress. According to legend, the first Sultan of Perak swore off the wearing of any diadems after the miraculous refloating of his ship, which had run aground during his journey to establish his reign in Perak. Hence, while Malaysian coronations are rather elaborate affairs, they do not involve the imposition of a crown.

The new king proceeds into the Istana Negara Throne Hall at the head of a large procession also consisting of his spouse, specially-picked soldiers carrying the royal regalia, and other notables including the Grand Chamberlain, or Datuk Paduka Maharaja Lela. The king and his wife are seated upon their thrones, and the regalia are brought forward. Following this, the Datuk Paduka Maharaja Lela brings forward a copy of the Quran, which the new monarch reverently receives, kisses, and places on a special table located between his throne and the queen's. A formal proclamation of the new king's reign is read, followed by the taking of a special coronation oath. The Prime Minister gives a special speech, which is followed by an address by the new king from the throne. A prayer is said, the Quran as returned to the Chamberlain, and the ceremony is completed.[11]

No monarch of Spain has been crowned as such since John I of Castile and Ferdinand I of Aragon. Instead, the new monarch appears at the Cortes, where he or she takes a formal oath to uphold the Constitution. Although the crown is evident at the ceremony, it is never actually placed on the monarch's head. Five days after his visit to the Cortes, Spanish King Juan Carlos I attended an "Enthronement Mass" at the Church of San Jerónimo el Real in Madrid. Accompanied by his wife Sofia, he was escorted beneath a canopy to a set of thrones set up near the high altar. Following the service, the Royals returned to the palace, where they greeted their subjects from the balcony, reviewed troops and attended a formal banquet.

In Sweden, no king has been crowned since Oscar II in 1873. The current monarch, Carl XVI Gustaf, was enthroned in a simple ceremony at the throne room of the Royal Palace in Stockholm on 19 September 1973. The crown jewels were displayed on cushions to the right and left of the royal throne, but were never given to the king. Carl Gustaf made an accession speech, which comprised the main purpose of the undertaking.[15]