Environmental policy in China is set by the National People's Congress and managed by the Ministry of Environmental Protection. The Center for American Progress has described China's environmental policy as similar to that of the United States before 1970. That is, the central government issues fairly strict regulations, but the actual monitoring and enforcement is largely undertaken by local governments that have greater interest in economic growth. The environmental work of non-governmental forces, such as lawyers, journalists, and non-governmental organizations, is limited by government regulations.[1]

China's rapid economic expansion combined with the country's relaxed environmental oversight has caused a number of ecological problems. In response to public pressure, the national government has undertaken a number of measures to curb pollution in China and improve the country's environmental situation.[2] However, the government's response has been criticized as inadequate.[3] Encouraged by national policy that judges regions solely by their economic development, corrupt and unwilling local authorities have hampered enforcement.[4][5] Nonetheless, in April 2014, the government amended its environmental law to better fight pollution.[5]

The Ministry of Environmental Protection (MEP), formerly the State Environmental Protection Administration (SEPA), is a cabinet-level ministry in the executive branch of the Chinese Government that is responsible for implementing environmental policies, as well as the enforcement of environmental laws and regulations.[6] The Ministry is tasked with protecting China's air, water, and land from pollution and contamination. Directly under the State Council, it is empowered and required by law to implement environmental policies and enforce environmental laws and regulations. Complementing its regulatory role, it funds and organizes research and development.[7] There are 12 offices and departments under MEP, all at the si (司) level in the government ranking system. They carry out regulatory tasks in different areas[which?] and make sure that the agency is functioning accordingly. Since 2006, there have been five regional centers to help with local inspections and enforcement.

In 1972, Chinese representatives attended the first United Nations Conference on the Human Environment. The next year, the Environmental Protection Leadership Group was established. In 1983, the Chinese government announced that environmental protection would become a state policy. In 1998, China went through a disastrous year of serious flooding, and the Chinese government upgraded the Leading Group to a ministry-level agency, which then became the State Environmental Protection Administration.[citation needed]

According to the Chinese government website, the Central Government invested more than 40 billion yuan between 1998 and 2001 on protection of vegetation, farm subsidies, and conversion of farm to forests.[8] Between 1999 and 2002, China converted 7.7 million hectares of farmland into forest.[9]

After the 2007 address, the influence of corruption was a hindrance to effective enforcement, as local authorities ignored orders and hampered the effectiveness of central decisions. In response, CPC General Secretary Hu Jintao implemented the "Green G.D.P." project, where China's gross domestic product was adjusted to compensate for negative environmental effects; however, the program quickly lost official influence due to unfavorable data. The project's lead researcher claimed that provincial leaders "do not like to be lined up and told how they are not meeting the leadership’s goals ... They found it difficult to accept this."[4] The government attempted to hold national "No Car Days" where cars were banned from central roads, but the action was largely ignored.[13] In 2008, the State Environmental Protection Administration was official replaced by the Ministry of Environmental Protection during the March National People's Congress sessions in Beijing.[14]

Citizen activism regarding government decisions that are perceived as environmentally damaging increased in the 2010s.[15] In April 2012, protests occurred in the southern town of Yinggehai following the announcement of a power plant project. The protesters initially succeeded in halting the project, worth 3.9 billion renminbi (£387m). Another town was selected for the location of the plant, but when the residents in the second location also resisted the authorities returned to Yinggehai. A second round of protests occurred in October 2012 and police clashed with protester, leading to 50 arrests and almost 100 injuries.[16] In response to a waste pipeline for a paper factory in the city of Qidong, several thousand demonstrators protested in July 2012. Sixteen of the protesters were sentenced to between twelve and eighteen months in prison; however, thirteen were granted a reprieve on the grounds that they had confessed and repented.[17] In total, more than 50,000 environmental protests occurred in China during 2012.[18]

In response to an increasing air pollution problem, the Chinese government announced a five-year, US$277 billion plan to address the issue in 2013. Northern China will receive particular attention, as the government aims to reduce air emissions by 25 percent by 2017, compared with 2012 levels.[19]

In March 2014, CPC General Secretary Xi Jinping "declared war" on pollution during the opening of the National People's Congress.[20] After extensive debate lasting nearly two years, the parliament approved a new environmental law in April. The new law empowers environmental enforcement agencies with great punitive power, defines areas which require extra protection, and gives independent environmental groups more ability to operate in the country.[5] The new articles of the law specifically address air pollution, and call for additional government oversight.[20] Lawmaker Xin Chunying called the law "a heavy blow [in the fight against] our country's harsh environmental realities, and an important systemic construct".[5] Three previous versions of the bill were voted down. The bill is the first revision to the environmental protection law since 1989.[5]

When the new environmental protection provisions go into effect in January 2015, the government's environmental agencies will be allowed to enforce strict penalties and seize property of illegal polluters. Companies that break the law will be "named and shamed", with company executives subject to prison sentences of 15 days. There will be no upper limit on fines; previously, it was often cheaper for companies to pay the meager fines provisioned by the law than install anti-pollution measures. In all, the new law has 70 provisions, compared to the 47 of the existing law.[20] More than 300 different groups will be able to sue on the behalf of people harmed by pollution.[5] It remains to be seen whether these changes to the law will overcome some of the traditional problems with environmental litigation in China, such as difficulty getting cases accepted by the court, trouble gathering evidence and interference from local government.[21]

A number of different classes of protected areas are recognized under Chinese law. National, provincial, and local governments all have the power to designate areas as protected. Regardless of designation, most enforcement is made at the local level. 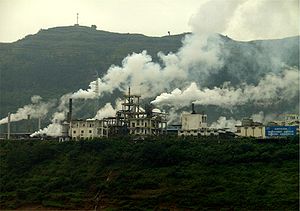 China has many environmental issues, severely affecting its biophysical environment as well as human health. The water resources of China are affected by both severe water quantity shortages and severe water quality pollution. An increasing population and rapid economic growth as well as lax environmental oversight have increased water demand and pollution. China has responded by measures such as rapidly building out the water infrastructure and increased regulation as well as exploring a number of further technological solutions. Water usage by its coal-fired power stations is drying up Northern China.[22][23][24] Desertification remains a serious problem, consuming an area greater than that taken by farmlands. Although desertification has been curbed in some areas, it still is expanding at a rate of more than 67 km² every year. 90% of China's desertification occurs in the west of the country.[25]

Various forms of pollution have increased as China has industrialized, causing widespread environmental and health problems.[26] In January 2013, fine airborne particulates rose as high as 993 micrograms per cubic meter in Beijing, compared with World Health Organization guidelines of no more than 25.[27] Heavy industry, dominated by state-owned enterprises, has been promoted since the beginning of central planning and still has many special privileges such as access to cheap energy and loans.[28] The industry possesses considerable power to resist environmental regulation.[29]

China's lax environmental oversight has contributed to its environmental problems. Sixteen of the world's twenty most polluted cities are found in China.[2][27] Government response has been criticized as inadequate.[3] An official report released in 2014, found that 20% of the country's farmland, and 16% of its soil overall, is polluted. An estimated 60% of the groundwater is polluted.[20]

According to the U.S. Environmental Protection Agency, China has shown great determination to "develop, implement, and enforce a solid environmental law framework". However, the impact of such efforts is not yet clear.[30] The harmonization of Chinese society and the natural environment is billed as one of the country's top national priorities.[31]

International groups called the law revision passed in April 2014 a positive development, but cautioned seeing the laws through to implementation would be a challenge.[5]

Because China does not have a fully established legal system, enterprise executives base their environmental practices largely on perceptions about regulators rather than concerns for legal issues, according to a 2014 study published in Journal of Public Administration Research and Theory. One executive interviewed said that China’s environmental regulations were “comprehensive” but yet “vague,” leaving local officials with large discretion in terms of enforcement. If executives think local officials may arbitrarily target their enterprises for enforcement, they are likely to adopt proactive practices, such as “developing certifiable environmental management systems,” but not basic ones, such as waste recycling.[32]