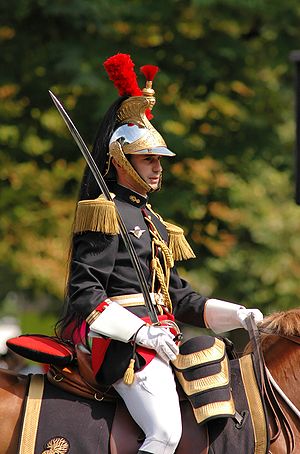 Officer of the French Republican Guard with epaulettes

Epaulette (/ˈɛpəlɛt/; also spelled epaulet)[1] is a type of ornamental shoulder piece or decoration used as insignia of rank by armed forces and other organizations. In several European armies epaulettes are also worn by all ranks of elite or ceremonial units when on parade.

Epaulettes are fastened to the shoulder by a shoulder strap or "passant", a small strap parallel to the shoulder seam, and the button near the collar, or by laces on the underside of the epaulette passing through holes in the shoulder of the coat. Colloquially, any shoulder straps with marks are also called epaulettes. The placement of the epaulette, its color and the length and diameter of its bullion fringe are used to signify the wearer's rank. At the join of the fringe and the shoulderpiece is often a metal piece in the form of a crescent. Although originally worn in the field, epaulettes are now normally limited to dress or ceremonial military uniforms. 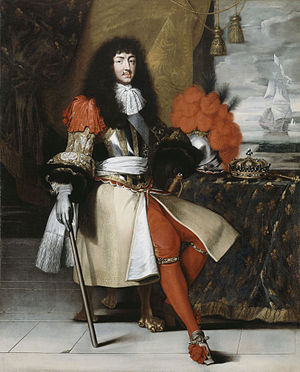 Epaulettes bear some resemblance to the shoulder pteruges of ancient Roman military costumes. However their direct origin lies in the bunches of ribbons worn on the shoulders of military coats at the end of the 17th century, which were partially decorative and partially intended to prevent shoulder belts from slipping. These ribbons were tied into a knot which left the fringed end free. This established the basic design of the epaulette as it evolved through the 18th and 19th centuries.[2]

From the 18th century on, epaulettes were used in the French and other armies to indicate rank. The rank of an officer could be determined by whether an epaulette was worn on the left shoulder, the right shoulder or on both. Later a "counter-epaulette" (with no fringe) was worn on the opposite shoulder of those who wore only a single epaulette. Epaulettes were made in silver or gold for officers, and in cloth of various colors for the enlisted men of various arms. By the early 18th century, epaulettes became the distinguishing feature of an officer, leading to officers of military units without epaulettes to petition their government for the right to wear epaulettes, to ensure that they would be recognized as officers.[3] Certain cavalry specialties wore flexible metal epaulettes referred to as shoulder scales, rarely worn on the field. During the Napoleonic Wars and subsequently through the 19th century, grenadiers, light infantry, voltigeurs and other specialist categories of infantry in many European armies wore cloth epaulettes with wool fringes in various colours to distinguish them from ordinary line infantry. "Flying artillery" wore "wings", similar to an epaulette but with only a bit of fringe on the outside, which matched the shoulder seam. Heavy artillery wore small balls representing ammunition on their shoulders."[citation needed]

An intermediate form in some services, such as the Russian Army, is the shoulder board, which neither has a fringe nor extends beyond the shoulder seam. This originated during the 19th century as a simplified version for service wear of the heavy and conspicuous full dress epaulette with bullion fringes.

Today, epaulettes have mostly been replaced by a five-sided flap of cloth called a shoulder board, which is sewn into the shoulder seam and the end buttoned like an epaulette.

From the shoulder board was developed the shoulder mark, a flat cloth tube that is worn over the shoulder strap and carries embroidered or pinned-on rank insignia. The advantages of this are the ability to easily change the insignia as occasions warrant.

Airline pilot uniform shirts generally include cloth flattened tubular epaulettes having cloth or bullion braid stripes, attached by shoulder straps integral to the shirts. The rank of the wearer is designated by the number of stripes: Traditionally four for captain, three for first officer (copilot), two for Second Officer (flight engineer). However, rank insignia are airline specific. For example at some airlines two stripes denote junior first officer and one stripe second officer (cruise or relief pilot). Airline captains' uniform caps usually will have a braid pattern on the bill. 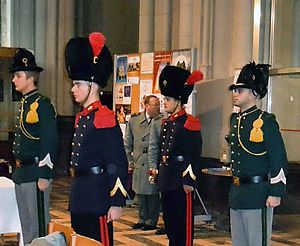 In the Belgian army epaulettes (gold and red) are worn with the ceremonial uniforms of the Royal Escort and the Grenadiers. 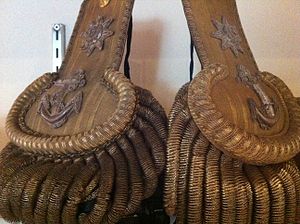 In Canada, after Unification and prior to the issue of the Distinct Environmental Uniform, musicians of the Band Branch wore epaulettes of braided gold cord on the CF uniform.

Epaulettes are still worn on some Army Full Dress, Patrol Dress, and Mess Dress uniforms. Epaulettes in the form of shoulder boards are worn with the officer's white Naval Service Dress.

Until 1914 officers of most French Army infantry regiments wore gold epaulettes in full dress, while those of mounted units wore silver. No insignia was worn on the epaulette itself, though the bullion fringe falling from the crescent differed according to rank.[4] Other ranks of most branches of the infantry, as well as cuirassiers wore detachable epaulettes of various colours (red for line infantry, green for Chasseurs, yellow for Colonial Infantry etc.) with woollen fringes, of a traditional pattern that dated back to the 18th Century. Other cavalry such as hussars, dragoons and chasseurs à cheval wore special epaulettes of a style originally intended to deflect sword blows from the shoulder.

In the modern French Army, epaulettes are still worn by those units retaining 19th-century-style full dress uniforms, notably the ESM Saint-Cyr and the Garde Républicaine. The French Foreign Legion continued to wear their green and red epaulettes, except for a break from 1915 to 1930. In recent years the Marine Infantry and some other units have readopted their traditional fringed epaulettes in various colours for ceremonial parades. The Marine nationale and the Armée de l'Air do not use epaulettes, but non-commissioned and commissioned officers wear a gilded shoulder strap called attente, which original function was to clip the epaulette onto the shoulder. The attentes are also worn by Army generals on dress uniform.

Until World War I officers of the Imperial German Army generally wore silver epaulettes as a distinguishing feature of their full-dress uniforms. For ranks up to and including captain these were "scale" epaulettes without fringes, for majors and colonels with fine fringes and for generals with a heavy fringe. The base of the epaulette was of regimental colors. For ordinary duty dress "shoulder-cords" of silver braid intertwined with state colors, were worn.[5]

During the period 1919-45, German Army uniforms were known for a four cord braided "figure-of-eight" decoration which acted as a shoulder board for senior and general officers. This was called a "shoulder knot" and was in silver with the specialty color piping (for field officers) and silver with red border (for generals). Although it was once seen on US Army uniforms, it remains only in the mess uniform, while a similar form was used in the British Army and its retained by the Household Cavalry today, boards of a similar type are used by the Republic of Korea Army's general officers. This type is still used in the present-day armies of Venezuela, Chile, Colombia, Paraguay, Ecuador and Bolivia; all of which formerly wore uniforms closely following the Imperial German model. Only the Chilean Army sports them in these uniforms in its ceremonial units, the Military Academy and the NCO School while the 5th Cavalry Regiment "Aca Caraya" of the Paraguayan Army sports both epaulettes and shoulder knots in its dress uniforms (save for a platoon wearing Chaco War uniforms). Epaulettes of the German pattern (as well as shoulder knots) are used by officers of ceremonial units and schools of the Bolivian Army.

Gold epaulettes in Haiti, were frequently worn throughout the 18th and 19th centuries in full dress.[6] During the Haitian Revolution, Gen. Charles Leclerc of the French Army wrote a letter to Napoleon Bonaparte saying, "We must destroy half of those in the plains and must not leave a single colored person in the colony who has worn an epaulette.”[7][8]

Epaulettes first appeared on Swedish uniforms in the second half of the 18th century. The epaulette was officially incorporated into Swedish uniform regulations in 1792, although foreign recruited regiments had had them earlier. Senior officers were to wear golden crowns to distinguish their rank from lower ranking officers who wore golden stars. 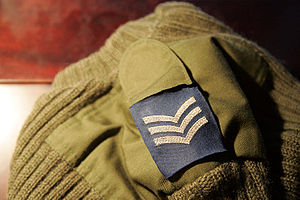 Epaulettes first appeared on British uniforms in the second half of the 18th century. The epaulette was officially incorporated into Royal Navy uniform regulations in 1795, although some officers wore them before this date. Under this system Flag Officers wore silver stars on their epaulettes to distinguish their ranks. A Captain with at least three years seniority had two plain epaulettes, while a Junior Captain wore one on the right shoulder, and a Commander one on the left.[9]

In 1855 army officers' large gold fringed epaulettes were abolished[10] and replaced by a simplified equivalent officially known as twisted shoulder-cords.[11] These were generally worn with full dress uniforms until 1939. Naval officers retained the historic fringed epaulettes for full dress during this period.

British cavalry on active service in the Sudan (1898) and during the Boer War (1899–1902) sometimes wore epaulettes made of chainmail to protect against sword blows landing on the shoulder. The blue "Number 1 dress" uniforms of some British cavalry regiments and yeomanry units still retain this feature in ornamental silvered form.[12]

With the introduction of khaki service dress in 1902 the British Army stopped wearing epaulettes in the field, switching to rank insignia embroidered on the cuffs of the uniform jacket. During World War I this was found to make officers a target for snipers, so the insignia was frequently moved to the shoulder straps, where it was less conspicuous.

The current multi terrain pattern (MTP) and the older combat uniform (DPM) has the insignia formerly used on shoulder straps displayed on a single strap worn vertically in the centre of the chest. 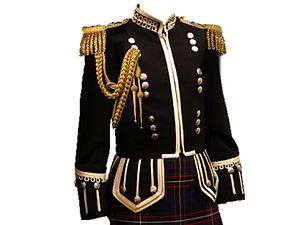 Scottish uniform with epaulettes and aiguillette

When policing large events, some specialist police officers' shoulder straps are colour-coded according to their role: 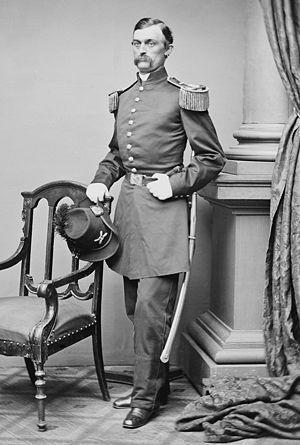 Epaulettes were specified for all United States Army officers in 1832; infantry officers wore silver epaulettes, while those of the artillery and other branches wore gold epaulettes, following the French manner. The rank insignia was of a contrasting metal, silver on gold and vice versa.

In 1851 the epaulettes became universally gold. Both majors and second lieutenants had no specific insignia. A major would have been recognizable as he would have worn the more elaborate epaulette fringes of a senior field officer. The rank insignia was silver for senior officers and gold for the bars of captains and first lieutenants. The reason for the choice of silver eagles over gold ones is thought to be one of economy; there were more cavalry and artillery colonels than infantry so it was cheaper to replace the numerically fewer gold ones.

Shoulder straps were adopted to replace epaulettes for field duty in 1836.