From Infogalactic: the planetary knowledge core
Jump to: navigation, search
For other uses, see Epigram (disambiguation). 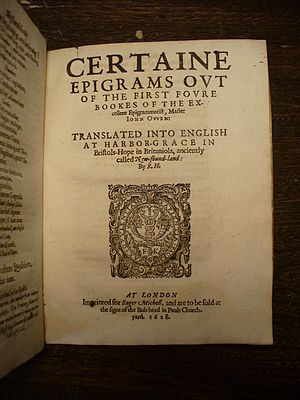 Robert Hayman's 1628 book Quodlibets devotes much of its text to epigrams.

An epigram is a brief, interesting, memorable, and sometimes surprising or satirical statement. Derived from the Greek: ἐπίγραμμα epigramma "inscription" from ἐπιγράφειν epigraphein "to write on, to inscribe",[1] this literary device has been employed for over two millennia.

The presence of wit or sarcasm tends to distinguish non-poetic epigrams from aphorisms and adages, which may lack them.

The Greek tradition of epigrams began as poems inscribed on votive offerings at sanctuaries – including statues of athletes – and on funerary monuments, for example "Go tell it to the Spartans, passersby...". These original epigrams did the same job as a short prose text might have done, but in verse. Epigram became a literary genre in the Hellenistic period, probably developing out of scholarly collections of inscriptional epigrams.

Though modern epigrams are usually thought of as very short, Greek literary epigram was not always as short as later examples, and the divide between "epigram" and "elegy" is sometimes indistinct (they share a characteristic metre, elegiac couplets); all the same, the origin of the genre in inscription exerted a residual pressure to keep things concise. Many of the characteristic types of literary epigram look back to inscriptional contexts, particularly funerary epigram, which in the Hellenistic era becomes a literary exercise. Other types look instead to the new performative context which epigram acquired at this time, even as it made the move from stone to papyrus: the Greek symposium. Many "sympotic" epigrams combine sympotic and funerary elements – they tell their readers (or listeners) to drink and live for today because life is short.

Epigrams are also thought of as having a "point" – that is, the poem ends in a punchline or satirical twist. By no means do all Greek epigrams behave this way; many are simply descriptive. Epigram is associated with 'point' because the European epigram tradition takes the Latin poet Martial as its principal model; he copied and adapted Greek models (particularly the contemporary poets Lucillius and Nicarchus) selectively and in the process redefined the genre, aligning it with the indigenous Roman tradition of 'satura', hexameter satire, as practised by (among others) his contemporary Juvenal. Greek epigram was actually much more diverse, as the Milan Papyrus now indicates.

Roman epigrams owe much to their Greek predecessors and contemporaries. Roman epigrams, however, were often more satirical than Greek ones, and at times used obscene language for effect. Latin epigrams could be composed as inscriptions or graffiti, such as this one from Pompeii, which exists in several versions and seems from its inexact meter to have been composed by a less educated person. Its content, of course, makes it clear how popular such poems were:

I'm astonished, wall, that you haven't collapsed into ruins,
since you're holding up the weary verse of so many poets.

However, in the literary world, epigrams were most often gifts to patrons or entertaining verse to be published, not inscriptions. Many Roman writers seem to have composed epigrams, including Domitius Marsus, whose collection Cicuta (now lost) was named after the poisonous plant Cicuta for its biting wit, and Lucan, more famous for his epic Pharsalia. Authors whose epigrams survive include Catullus, who wrote both invectives and love epigrams – his poem 85 is one of the latter.

I hate and I love. Perhaps you ask why I do this.
I know not, but I feel that it is happening, and am tormented greatly.

The master of the Latin epigram, however, is Martial. His technique relies heavily on the satirical poem with a joke in the last line, thus drawing him closer to the modern idea of epigram as a genre. Here he defines his genre against a (probably fictional) critic (in the latter half of 2.77):

Learn what you don't know: one work of (Domitius) Marsus or learned Pedo
often stretches out over a doublesided page.
A work isn't long if you can't take anything out of it,
but you, Cosconius, write even a couplet too long.

Poets known for their epigrams whose work has been lost include Cornificia.

In early English literature the short couplet poem was dominated by the poetic epigram and proverb, especially in the translations of the Bible and the Greek and Roman poets. Since 1600, two successive lines of verse that rhyme with each other, known as a couplet featured as a part of the longer sonnet form, most notably in William Shakespeare's sonnets. Sonnet 76 is an excellent example. The two line poetic form as a closed couplet was also used by William Blake in his poem Auguries of Innocence and also by Byron (Don Juan (Byron) XIII); John Gay (Fables); Alexander Pope (An Essay on Man).

The first work of English literature penned in North America was Robert Hayman's Quodlibets, Lately Come Over from New Britaniola, Old Newfoundland, which is a collection of over 300 epigrams, many of which do not conform to the two-line rule or trend. While the collection was written between 1618 and 1628 in what is now Harbour Grace, Newfoundland, it was published shortly after his return to Britain.[2]

In Victorian times the epigram couplet was often used by the prolific American poet Emily Dickinson. Her poem No. 1534 is a typical example of her eleven poetic epigrams. The novelist George Eliot also included couplets throughout her writings. Her best example is in her sequenced sonnet poem entitled Brother and Sister, in which each of the eleven sequenced sonnet ends with a couplet. In her sonnets, the preceding lead-in-line, to the couplet ending of each, could be thought of as a title for the couplet, as is shown in Sonnet VIII of the sequence.

During the early 20th century, the rhymed epigram couplet form developed into a fixed verse image form, with an integral title as the third line. Adelaide Crapsey codified the couplet form into a two line rhymed verse of ten syllables per line with her image couplet poem On Seeing Weather-Beaten Trees, first published in 1915.

By the 1930s, the five-line cinquain verse form became widely known in the poetry of the Scottish poet William Soutar. These were originally labelled epigrams but later identified as image cinquains in the style of Adelaide Crapsey. J. V. Cunningham was also a noted writer of epigrams,(a medium suited to a 'short-breathed' person).[3]

What is an Epigram? a dwarfish whole,
Its body brevity, and wit its soul.
— Samuel Taylor Coleridge ("Epigram", 1809)

Some can gaze and not be sick
But I could never learn the trick.
There's this to say for blood and breath;
They give a man a taste for death.
— A. E. Housman

I am His Highness' dog at Kew;
Pray tell me, sir, whose dog are you?
— Alexander Pope

I'm tired of Love: I'm still more tired of Rhyme.
But Money gives me pleasure all the time.
— Hilaire Belloc

To define the beautiful is to misunderstand it.
— Charles Robert Anon (Fernando Pessoa)

This Humanist whom no belief constrained
Grew so broad-minded he was scatter-brained.
— J.V. Cunningham

All things pass
Love and mankind is grass.
— Stevie Smith

Occasionally, simple and witty statements, though not poetic per se, may also be considered epigrams. Oscar Wilde's witticisms such as "I can resist everything except temptation" are considered epigrams. Wilde's statement, "the only thing worse than being talked about is not being talked about" is another example. This shows the epigram's tendency towards paradox. Dorothy Parker's one-liners can be considered epigrams, as can Macdonald Carey's statement, "like sands through the hourglass, so are the days of our lives". Friedrich Nietzsche considered that, "a witticism is an epigram on the death of a feeling," in Human, All Too Human.[original research?]

Wit or sarcasm help distinguish epigrams from aphorisms and adages, which may lack them.