Epping Forest is a local government district northeast of Greater London in Essex, England named after Epping Forest, of which the district contains a large part.

The whole district is divided into civil parishes a majority of which, particularly in the north and east of the district are rural and sparsely populated for an area so close to London; it includes the town of Chipping Ongar [n 1] and surrounding villages. The south is more suburban and dominated by Loughton, the largest town in the district. Most of the District has a wide range of architectural styles and periods.[1] Loughton is beside Epping Forest to the west and separated by farms, rivers and golf courses from other settlements in other directions. As an example of conserved physical geographic landscapes, the Roding Valley and Three Forests Way (one end of the Stort Valley Way and the other end connecting to the Harcamlow Way in Hatfield Forest and National Nature Reserve, Essex which is north of Epping Forest District. The settlements here are close to, and in places (Chigwell and Buckhurst Hill) are contiguous with, London's conurbation. Although entirely outside Greater London for Eurostat statistical purposes the district is included in the Greater London Urban Area, demonstrating a degree of close economic dependence on the capital. 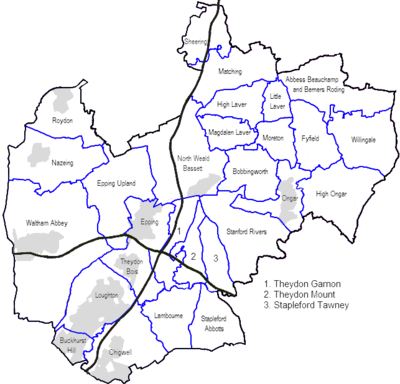 Town and parish councils. The forest itself today spans from Epping Upland to the Greater London border

The district was formed on 1 April 1974 by the merger of Chigwell Urban District, Epping Urban District and Waltham Holy Cross Urban District, along with most of Epping and Ongar Rural District. Since then there have been some changes to the Greater London boundary:

The district can be traced on maps by reference to the M25 motorway and the M11 motorway which form a junction at Theydon Garnon. From the junction the towns of Loughton and Buckhurst Hill are south-west, Chigwell is south, Waltham Abbey is west, Epping north-west, and Ongar north-east.

Rail transport in the district is provided by the Central line of the London Underground, which is entirely above ground in the District, and the West Anglia Main Line.[4] Further National Rail stations are available at Harlow, Sawbridgeworth and Bishop's Stortford, along the District's boundary.

The stations in the district are:

Unlike the section of the Metropolitan line outside Greater London, where a special fare structure exists, each station in the district is in one of Travelcard zones 4, 5 or 6. This is because Essex County Council have agreed a subsidy scheme with Transport for London similar to that with the London boroughs, whilst neither Hertfordshire County Council nor Buckinghamshire County Council have done so. From 2 January 2007, the stations on the Hainault Loop in the southern part of the district (Roding Valley, Chigwell and Grange Hill), which had previously been in Travelcard zone 5, were reallocated to zone 4 in an attempt by Transport for London to encourage greater use of this section of the line. Until November 2006, services to Roding Valley, Chigwell and Grange Hill stopped at around 8pm but since then the service has run to around midnight. However, the service to these stations is still not as frequent as to those wholly within Greater London or to those between Buckhurst Hill and Epping.

The Central line used to have an extension from Epping to Ongar, with intermediate stations at North Weald and Blake Hall. However, patronage on this line was never high, and it ceased to be a part of the London Underground when it closed in 1994, with the remote Blake Hall station having closed 13 years earlier, in 1981, reputedly having only served six passengers a day. The line was nonetheless reopened in 2004 as the Epping Ongar Railway, which runs heritage services on Sundays and bank holidays.

North Weald Airfield, a Battle of Britain airfield, is owned by the District Council, and has a long runway allowing use of jet aircraft. Stapleford Aerodrome is another local airfield, and offers pleasure and charter flights.[5]

Following the general election of 6 May 2010, the current members of parliament for the district are:

Of the seven Essex County Councillors elected for Epping Forest divisions in the most recent county council elections in 2013, five are from the Conservative Party, one is a Liberal Democrat, and one is from Loughton Residents Association.

File:Epping Forest Last Victors 2011.png
The highest polling party in each ward the last time there was an election there. Grey signifies in this map Loughton Residents Association.

The district council is now based in Epping, roughly in the centre of the district. Its offices were previously located in Loughton.

Since 2002, when the ward boundaries were reorganised resulting in the loss of one council seat, the district has had 58 Councillors representing 32 wards. Each ward is represented by one, two or three Councillors, depending on the ward's population, so that each Councillor represents a roughly equal proportion of the district's electorate.[7]

Councillors serve for a four-year term. They are elected on a cycle of thirds, i.e. in three years out of every four, a third of the council is up for election, and no elections take place in the fourth year. When the ward boundaries were reorganised in 2002, all 58 seats were up for election.

The table below summarises the number of seats held by each party after each year's elections (no elections took place in 2005, 2009 and 2013). The council returned to Conservative control following the gain of a seat in a by-election in December 2006[8] after being under no overall control since 1994.