Equality before the law 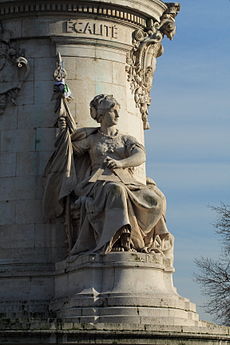 Equality before the law, also known as equality under the law, equality in the eyes of the law, or legal equality, is the principle under which all people are subject to the same laws of justice (due process).[1] Law also raises important and complex issues concerning equality, fairness, and justice. There is an old saying that 'All are equal before the law.' The author Anatole France said in 1894, "In its majestic equality, the law forbids rich and poor alike to sleep under bridges, beg in the streets, and steal loaves of bread."[2] The belief in equality before the law is called legal egalitarianism.

Article 7 of the Universal Declaration of Human Rights states that "All are equal before the law and are entitled without any discrimination to equal protection of the law."[1]

According to the United Nations, this principle is particularly important to the minorities and to the poor.[1]

Equality before the law is one of the basic principles of liberalism.[3][4]

In his famous funeral oration of 431 BC, the Athenian leader Pericles discussed this concept. This may be the first known instance.

"If we look to the laws, they afford equal justice to all in their private differences; if no social standing, advancement in public life falls to reputation for capacity, class considerations not being allowed to interfere with merit; nor again does poverty bar the way"[5]

In 1988, prior to serving as a Justice on the U.S. Supreme Court, Ruth Bader Ginsburg wrote: "Generalizations about the way women or men are ... cannot guide me reliably in making decisions about particular individuals".[7] In an ACLU's Women's Rights Project in the 1970s Ginsburg challenged, in Frontiero v. Richardson, the laws that gave health service benefits to wives of servicemen but not to husbands of servicewomen.[8]There are over 150 national constitutions that currently mention equality regardless of gender (click here to explore the provisions).

Some radical feminists, however, have opposed equality before the law, because they think that it maintains the weak position of the weak.[9]

The phrase "Equality before the law" is the motto of the State of Nebraska and appears on its state seal.

Article 200 of the Criminal Code of Japan, the penalty regarding parricide, was declared unconstitutional for violating the equality under the law by the Supreme Court of Japan in 1973, as a result of the trial of the Tochigi patricide case.[10]