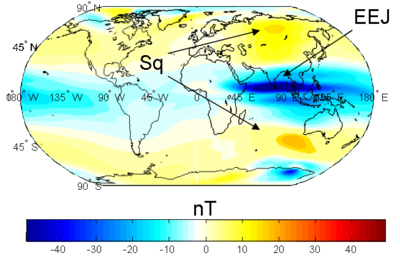 The worldwide solar-driven wind results in the so-called Sq (solar quiet) current system in the E region of the Earth's ionosphere (100–130 km altitude). Resulting from this current is an electrostatic field directed east-west (dawn-dusk) in the equatorial day side of the ionosphere. At the magnetic dip equator, where the geomagnetic field is horizontal, this electric field results in an enhanced eastward current flow within ±3 degrees of the magnetic equator, known as the equatorial electrojet (EEJ).

Studies of the EEJ from satellite and ground magnetic data

The EEJ phenomenon was first identified using geomagnetic data. The amplitude of the daily variation of the horizontal magnetic intensity (ΔH) measured at a geomagnetic observatory near the dip-equator is 3–5 fold higher than the variation of data from other regions of Earth. A typical diurnal equatorial observatory data show a peak of strength ~80 nT at 12:00 LT, with respect to the night-time level. Egedal (1947) showed that the enhancement of quiet day solar daily variations in ΔH (Sq(H)) lay within the 50 latitude centered on the dip equator. The mechanism that produced the variation in the magnetic field was proposed as a band of current about 300 km in width flowing over the dip equator.

EEJ studies from satellite data were initiated with the arrival of data from the POGO (Polar Orbiting Geophysical Observatories) series of satellite (1967–1970). The characteristic signature of the EEJ is a sharp negative V-shaped curve in the

H field, attaining its minimum within 0.5° of the magnetic dip equator. The magnetic data from satellite missions like Ørsted (1999–present) and CHAMP (2000–present) have vastly improved our knowledge of the EEJ. 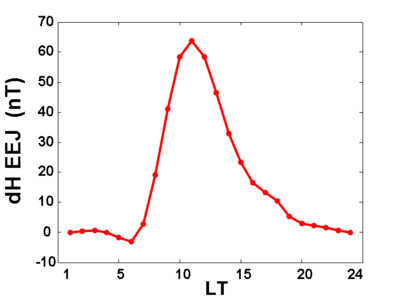 EEJ magnetic signals measured by Ettaiyapuram Magnetic Observatory, India ( ETT - Operated by National Geophysical Research Institute, NGRI, Hyderabad). These data are averages of the daily difference between magnetic data (H) at Ettaiyapuram and Hyderabad collected over several years. The horizontal intensity of magnetic field peaks at ~12 LT. The build up flank in the morning hours is steeper than that of the decay phase. .
A movie of the variation of the geomagnetic field at the surface of the Earth due to the ionsopheric current systems. The equatorial intensification of the magnetic field is due to the Equatorial Electrojet (EEJ). UT = universal time. The unit is nT (nanotesla). The movie was generated using a geomagnetic field model (CM4).