Equidae (sometimes known as the horse family) is the taxonomic family of horses and related animals, including the extant horses, donkeys, and zebras, and many other species known only from fossils. All extant species are in the genus Equus. Equidae belongs to the order Perissodactyla, which includes the extant tapirs and rhinoceros as well as several extinct families.

The term equid refers to any member of this family, including any equine.

Main article: Evolution of the horse 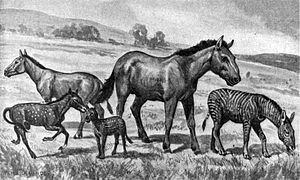 The oldest known fossils assigned to Equidae date from the early Eocene, 54 million years ago. They formerly were assigned to the genus Hyracotherium, but the type species of that genus now is regarded to be not a member of this family. The other species have been split off into different genera. These early Equidae were fox-sized animals with three toes on the hind feet, and four on the front feet. They were herbivorous browsers on relatively soft plants, and already adapted for running. The complexity of their brains suggest that they already were alert and intelligent animals.[1] Later species reduced the number of toes, and developed teeth more suited for grinding up grasses and other tough plant food.

The family became relatively diverse during the Miocene, with many new species appearing. By this time, equids were more truly horse-like, having developed the typical body shape of the modern animals.[2] Many of these species bore the main weight of their bodies on their central, third, toe, with the others becoming reduced, and barely touching the ground, if at all. The sole surviving genus, Equus, had evolved by the early Pleistocene, and spread rapidly through the world.[3] 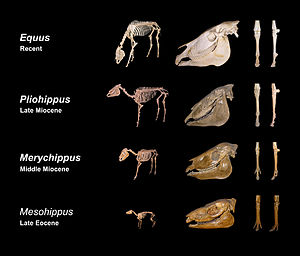 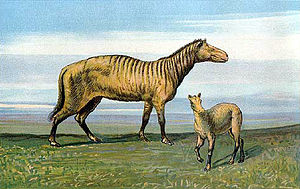 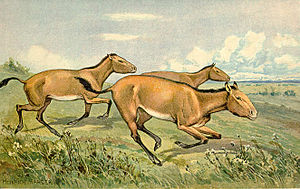 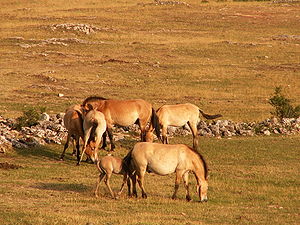