From Infogalactic: the planetary knowledge core
Jump to: navigation, search
This article is about Erasmus Darwin, who lived 1731–1802. For his descendants with the same name, see Erasmus Darwin (disambiguation).

Erasmus Darwin (12 December 1731 – 18 April 1802) was an English physician. One of the key thinkers of the Midlands Enlightenment, he was also a natural philosopher, physiologist, slave-trade abolitionist,[1] inventor and poet. His poems included much natural history, including a statement of evolution and the relatedness of all forms of life. He was a member of the Darwin–Wedgwood family, which includes his grandsons Charles Darwin and Francis Galton. Darwin was also a founding member of the Lunar Society of Birmingham, a discussion group of pioneering industrialists and natural philosophers. He turned down George III's invitation to be a physician to the King.

Erasmus Darwin House, his home in Lichfield, is now a museum dedicated to Erasmus Darwin and his life's work. A school in nearby Chasetown recently converted to Academy status and is now known as Erasmus Darwin Academy. 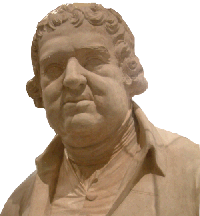 Darwin was born at Elston Hall, Nottinghamshire near Newark-on-Trent, England, the youngest of seven children of Robert Darwin of Elston (12 August 1682 – 20 November 1754), a lawyer, and his wife Elizabeth Hill (1702–97). The name Erasmus had been used by a number of his family and derives from his ancestor Erasmus Earle, Common Sergent of England under Oliver Cromwell.[2] His siblings were:

He was educated at Chesterfield Grammar School, then later at St John's College, Cambridge.[3] He obtained his medical education at the University of Edinburgh Medical School. Whether Darwin ever obtained the formal degree of MD is not known. Darwin settled in 1756 as a physician at Nottingham, but met with little success and so moved the following year to Lichfield to try to establish a practice there. A few weeks after his arrival, using a novel course of treatment, he restored the health of a young man whose death seemed inevitable. This ensured his success in the new locale. Darwin was a highly successful physician for more than fifty years in the Midlands. George III invited him to be Royal Physician, but Darwin declined. In Lichfield, Darwin wrote "didactic poetry, developed his system of evolution, and invented amongst other things, a carriage steering mechanism, a manuscript copier and a speaking machine. 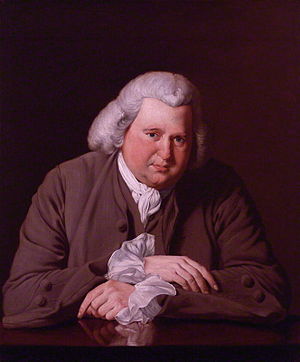 The first Mrs. Darwin died in 1770. A governess, Mary Parker, was hired to look after Robert. By late 1771, employer and employee had become intimately involved and together they had two illegitimate daughters:

Susanna and Mary Jr later established a boarding school for girls. In 1782, Mary Sr (the governess) married Joseph Day (1745–1811), a Birmingham merchant, and moved away.

Darwin may have fathered another child, this time with a married woman. A Lucy Swift gave birth in 1771 to a baby, also named Lucy, who was christened a daughter of her mother and William Swift, but there is reason to believe the father was really Darwin.[4] Lucy Jr. married John Hardcastle in Derby in 1792 and their daughter, Mary, married Francis Boott, the physician.

In 1775, Darwin met Elizabeth Pole, daughter of Charles Colyear, 2nd Earl of Portmore, and wife of Colonel Edward Pole (1718–1780); but as she was married, Darwin could only make his feelings known for her through poetry. When Edward Pole died, Darwin married Elizabeth and moved to her home, Radbourne Hall, four miles (6 km) west of Derby. The hall and village are these days known as Radbourne. In 1782, they moved to Full Street, Derby. They had four sons, one of whom died in infancy, and three daughters:

Darwin died suddenly on 18 April 1802, weeks after having moved to Breadsall Priory, just north of Derby. His body is buried in All Saints Church, Breadsall. Erasmus Darwin is commemorated on one of the Moonstones, a series of monuments in Birmingham.

Darwin formed the Lichfield Botanical Society (despite the name, composed of only three men, Erasmus Darwin, Sir Brooke Boothby and Mr John Jackson, proctor of Lichfield Cathedral[notes 1])[5][6] to translate the works of the Swedish botanist Carl Linnaeus from Latin into English. This took seven years. The result was two publications: A System of Vegetables between 1783 and 1785, and The Families of Plants in 1787. In these volumes, Darwin coined many of the English names of plants that we use today.[7]

Darwin then wrote The Loves of the Plants, a long poem, which was a popular rendering of Linnaeus' works. Darwin also wrote Economy of Vegetation, and together the two were published as The Botanic Garden. Among other writers he influenced were Anna Seward and Maria Jacson.

Darwin's most important scientific work, Zoonomia (1794–1796), contains a system of pathology and a chapter on 'Generation'. In the latter, he anticipated some of the views of Jean-Baptiste Lamarck, which foreshadowed the modern theory of evolution. Erasmus Darwin's works were read and commented on by his grandson Charles Darwin the naturalist. Erasmus Darwin based his theories on David Hartley's psychological theory of associationism.[8] The essence of his views is contained in the following passage, which he follows up with the conclusion that one and the same kind of living filament is and has been the cause of all organic life:

Would it be too bold to imagine, that in the great length of time, since the earth began to exist, perhaps millions of ages before the commencement of the history of mankind, would it be too bold to imagine, that all warm-blooded animals have arisen from one living filament, which THE GREAT FIRST CAUSE endued with animality, with the power of acquiring new parts, attended with new propensities, directed by irritations, sensations, volitions, and associations; and thus possessing the faculty of continuing to improve by its own inherent activity, and of delivering down those improvements by generation to its posterity, world without end![9]

Erasmus Darwin also anticipated natural selection in Zoönomia mainly when writing about the "three great objects of desire" for every organism: "lust, hunger, and security."[9] Another remarkable foresight written in Zoönomia that relates to natural selection is Erasmus' thoughts on how a species propagated itself. Erasmus' idea that "the strongest and most active animal should propagate the species, which should thence become improved"[9] was almost identical to the future theory of survival of the fittest.

Erasmus Darwin was familiar with the earlier proto-evolutionary thinking of James Burnett, Lord Monboddo, and cited him in his 1803 work Temple of Nature.

Erasmus Darwin offered the first glimpse of his theory of evolution, obliquely, in a question at the end of a long footnote to his popular poem The Loves of the Plants (1789), which was republished throughout the 1790s in several editions as The Botanic Garden. His poetic concept was to anthropomorphise the stamen (male) and pistil (female) sexual organs, as bride and groom. In this stanza on the flower Curcuma (also Flax and Turmeric) the "youths" are infertile, and he devotes the footnote to other examples of neutered organs in flowers, insect castes, and finally associates this more broadly with many popular and well-known cases of vestigial organs (male nipples, the third and fourth wings of flies, etc.)

Darwin's final long poem, The Temple of Nature was published posthumously in 1803. The poem was originally titled The Origin of Society. It is considered his best poetic work. It centres on his own conception of evolution. The poem traces the progression of life from micro-organisms to civilised society. The poem contains a passage that describes the struggle for existence.[10]

His poetry was admired by Wordsworth, although Coleridge was intensely critical, writing, "I absolutely nauseate Darwin's poem".[6] It often made reference to his interests in science; for example botany and steam engines.

The last two leaves of Darwin's A plan for the conduct of female education in boarding schools (1797) contain a book list, an apology for the work, and an advert for "Miss Parkers School". The work probably resulted from his liaison with Mary Parker.[citation needed] The school advertised on the last page is the one he set up in Ashbourne, Derbyshire for their two illegitimate children, Susanna and Mary.

Darwin regretted that a good education had not been generally available to women in Britain in his time, and drew on the ideas of Locke, Rousseau, and Genlis in organising his thoughts. Addressing the education of middle class girls, Darwin argued that amorous romance novels were inappropriate and that they should seek simplicity in dress. He contends that young women should be educated in schools, rather than privately at home, and learn appropriate subjects. These subjects include physiognomy, physical exercise, botany, chemistry, mineralogy, and experimental philosophy. They should familiarise themselves with arts and manufactures through visits to sites like Coalbrookdale, and Wedgwood's potteries; they should learn how to handle money, and study modern languages. Darwin's educational philosophy took the view that men and women should have different, but complementary capabilities, skills, spheres, and interests.[11] In the context of the times, this program may be read as a modernising influence.

Darwin also established a lifelong friendship with Benjamin Franklin, who shared Darwin's support for the American and French revolutions. The Lunar Society was instrumental as an intellectual driving force behind England's Industrial Revolution.

In addition to the Lunar Society, Erasmus Darwin belonged to the influential Derby Philosophical Society, as did his brother-in-law Samuel Fox (see family tree below). He experimented with the use of air and gases to alleviate infections and cancers in patients. A Pneumatic Institution was established at Clifton in 1799 for clinically testing these ideas. He conducted research into the formation of clouds, on which he published in 1788. He also inspired Robert Weldon's Somerset Coal Canal caisson lock.

Mary Shelley in her introduction to the 1831 edition of Frankenstein notes that some unspecified "experiments of Dr. Darwin" were part of the evening discussion topics leading up to her inspiration and creation of her novel.[12]

Contemporary literature dates the cosmological theories of the Big Bang and Big Crunch to the 19th and 20th centuries. However Erasmus Darwin had speculated on these sorts of events in The Botanic Garden, A Poem in Two Parts: Part 1, The Economy of Vegetation, 1791:

Roll on, ye Stars! exult in youthful prime,
Mark with bright curves the printless steps of Time;
Near and more near your beamy cars approach,
And lessening orbs on lessening orbs encroach; —
Flowers of the sky! ye too to age must yield,
Frail as your silken sisters of the field!
Star after star from Heaven's high arch shall rush,
Suns sink on suns, and systems systems crush,
Headlong, extinct, to one dark center fall,
And Death and Night and Chaos mingle all!
— Till o'er the wreck, emerging from the storm,
Immortal Nature lifts her changeful form,
Mounts from her funeral pyre on wings of flame,
And soars and shines, another and the same.

Darwin was the inventor of several devices, though he did not patent any. He believed this would damage his reputation as a doctor, and encouraged his friends to patent their own modifications of his designs.[13]

In notes dating to 1779, Darwin made a sketch of a simple hydrogen-oxygen rocket engine, with gas tanks connected by plumbing and pumps to an elongated combustion chamber and expansion nozzle, a concept not to be seen again until one century later.