Erectile dysfunction (ED) or impotence is sexual dysfunction characterized by the inability to develop or maintain an erection of the penis during sexual activity.[1] A penile erection is the hydraulic effect of blood entering and being retained in sponge-like bodies within the penis. The process is most often initiated as a result of sexual arousal, when signals are transmitted from the brain to nerves in the penis. The most important organic causes are cardiovascular disease and diabetes, neurological problems (for example, trauma from prostatectomy surgery), hormonal insufficiencies (hypogonadism) and drug side effects.

Psychological impotence is where erection or penetration fails due to thoughts or feelings (psychological reasons) rather than physical impossibility; this is somewhat less frequent but can often be helped. Notably in psychological impotence, there is a strong response to placebo treatment. Erectile dysfunction can have severe psychological consequences as it can be tied to relationship difficulties and masculine self-image.

Besides treating the underlying causes such as potassium deficiency or arsenic contamination of drinking water, the first line treatment of erectile dysfunction consists of a trial of PDE5 inhibitor drugs (the first of which was sildenafil or Viagra). In some cases, treatment can involve prostaglandin tablets in the urethra, injections into the penis, a penile prosthesis, a penis pump or vascular reconstructive surgery.[2]

Erectile dysfunction is characterized by the regular or repeated inability to obtain or maintain an erection. It is analyzed in several ways:

Surgical intervention for a number of conditions may remove anatomical structures necessary to erection, damage nerves, or impair blood supply. Erectile dysfunction is a common complication of treatments for prostate cancer, including prostatectomy and destruction of the prostate by external beam radiation, although the prostate gland itself is not necessary to achieve erection. As far as inguinal hernia surgery is concerned, in most cases, and in the absence of postoperative complications, the operative repair can lead to a recovery of the sexual life of patients with preoperative sexual dysfunction, while, in most cases, it does not affect patients with a preoperative normal sexual life.[15]

ED can also be associated with bicycling due to both neurological and vascular problems due to compression.[16] The increase risk appears to be about 1.7-fold.[17]

Penile erection is managed by two mechanisms: the reflex erection, which is achieved by directly touching the penile shaft, and the psychogenic erection, which is achieved by erotic or emotional stimuli. The former uses the peripheral nerves and the lower parts of the spinal cord, whereas the latter uses the limbic system of the brain. In both cases, an intact neural system is required for a successful and complete erection. Stimulation of the penile shaft by the nervous system leads to the secretion of nitric oxide (NO), which causes the relaxation of smooth muscles of corpora cavernosa (the main erectile tissue of penis), and subsequently penile erection. Additionally, adequate levels of testosterone (produced by the testes) and an intact pituitary gland are required for the development of a healthy erectile system. As can be understood from the mechanisms of a normal erection, impotence may develop due to hormonal deficiency, disorders of the neural system, lack of adequate penile blood supply or psychological problems.[18] Spinal cord injury causes sexual dysfunction including ED. Restriction of blood flow can arise from impaired endothelial function due to the usual causes associated with coronary artery disease, but can also be caused by prolonged exposure to bright light.

There are no formal tests to diagnose erectile dysfunction. Some blood tests are generally done to exclude underlying disease, such as hypogonadism and prolactinoma. Impotence is also related to generally poor physical health, poor dietary habits, obesity, and most specifically cardiovascular disease such as coronary artery disease and peripheral vascular disease. Therefore, a thorough physical examination is helpful, in particular the simple search for a previously undetected groin hernia since it can affect sexual functions in men and is easily curable.[15]

A useful and simple way to distinguish between physiological and psychological impotence is to determine whether the patient ever has an erection. If never, the problem is likely to be physiological; if sometimes (however rarely), it could be physiological or psychological. The current diagnostic and statistical manual of mental diseases (DSM-IV) has included a listing for impotence.

Nocturnal penile tumescence (NPT)
It is normal for a man to have five to six erections during sleep, especially during rapid eye movement (REM). Their absence may indicate a problem with nerve function or blood supply in the penis. There are two methods for measuring changes in penile rigidity and circumference during nocturnal erection: snap gauge and strain gauge. A significant proportion of men who have no sexual dysfunction nonetheless do not have regular nocturnal erections.

Penile biothesiometry
This test uses electromagnetic vibration to evaluate sensitivity and nerve function in the glans and shaft of the penis.

Dynamic infusion cavernosometry (DICC)
technique in which fluid is pumped into the penis at a known rate and pressure. It gives a measurement of the vascular pressure in the corpus cavernosum during an erection.

Corpus cavernosometry
Cavernosography measurement of the vascular pressure in the corpus cavernosum. Saline is infused under pressure into the corpus cavernosum with a butterfly needle, and the flow rate needed to maintain an erection indicates the degree of venous leakage. The leaking veins responsible may be visualised by infusing a mixture of saline and x ray contrast medium and performing a cavernosogram.[19] In Digital Subtraction Angiography (DSA), the images are acquired digitally.

Treatment depends on the cause.

Exercise, particularly aerobic exercise during midlife is effective for preventing ED; exercise as a treatment is under investigation.[20]:6, 18–19 For tobacco smokers, cessation results in a significant improvement.[21]

Oral pharmacotherapy and vacuum erection devices are first-line treatments,[20]:20,24 followed by injections of drugs into the penis, and penile implants.[20]:25–26

The cyclic nucleotide phosphodiesterases constitute a group of enzymes that destroy the cyclic nucleotides cyclic adenosine monophosphate (cAMP) and cyclic guanosine monophosphate (cGMP). Phosphodiesterases exist in different molecular forms and are unevenly distributed throughout the body. One of the forms of phosphodiesterase is termed PDE5, and inhibiting PDE5 increases the amount of cGMP available in the blood supply to the penis, thus increasing blood flow. The PDE5 inhibitors sildenafil (Viagra), vardenafil (Levitra) and tadalafil (Cialis) are prescription drugs which are taken orally.[20]:20–21

A topical cream combining alprostadil with the permeation enhancer DDAIP has been approved in Canada under the brand name Vitaros as a first line treatment for erectile dysfunction.[22]

Another treatment regimen is injection therapy. One of the following drugs is injected into the penis: papaverine, phentolamine, and prostaglandin E1.[20]:25

Extracorporeal shockwave therapy is a relatively new treatment for erectile dysfunction that is non-drug, non-surgical and without adverse side effects. It is the same therapy as used in orthopedics, urology and cardiology and which at higher energies is used to break up kidney stones, known as lithotripsy. The indication for erectile dysfunction has been approved for use in Europe, most countries in the Middle East and South America as well as in Canada. At this point it has not been approved by the FDA (U.S. Food and Drug Administration).

A vacuum erection device helps draw blood into the penis by applying negative pressure. This type of device is sometimes referred to as penis pump and may be used just prior to sexual intercourse. Several types of FDA approved vacuum therapy devices are available with a doctor's prescription. When pharmacological methods fail, a purpose-designed external vacuum pump can be used to attain erection, with a separate compression ring fitted to the penis to maintain it. These pumps should be distinguished from other penis pumps (supplied without compression rings) which, rather than being used for temporary treatment of impotence, are claimed to increase penis length if used frequently, or vibrate as an aid to masturbation. More drastically, inflatable or rigid penile implants may be fitted surgically.

In a German study with 224 groin hernia patients, 23,2% of them mentioned preoperative sexual dysfunction related to the groin hernia. Postoperatively, the surgical repair had a positive influence on the sexual function in these patients.[15]

Often, as a last resort if other treatments have failed, the most common procedure is prosthetic implants which involves the insertion of artificial rods into the penis.[20]:26

The FDA does not recommend alternative therapies (i.e. those that have not received FDA approval) to treat sexual dysfunction.[23] Many products are advertised as "herbal viagra" or "natural" sexual enhancement products, but no clinical trials or scientific studies support the effectiveness of these products for the treatment of erectile dysfunction, and synthetic chemical compounds similar to sildenafil have been found as adulterants in many of these products.[24][25][26][27][28] The United States Food and Drug Administration has warned consumers that any sexual enhancement product that claims to work as well as prescription products is likely to contain such a contaminant.[29] 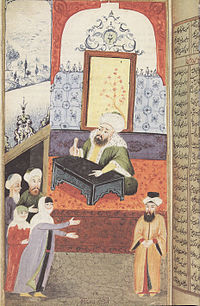 An unhappy wife is complaining to the Qadi about her husband's impotence. Ottoman miniature.

During the late 16th and 17th centuries in France, male impotence was considered a crime, as well as legal grounds for a divorce. The practice, which involved inspection of the complainants by court experts, was declared obscene in 1677.[30]

John R. Brinkley initiated a boom in male impotence cures in the U.S. in the 1920s and 1930s. His radio programs recommended expensive goat gland implants and "mercurochrome" injections as the path to restored male virility, including operations by surgeon Serge Voronoff.

Modern drug therapy for ED made a significant advance in 1983, when British physiologist Giles Brindley dropped his trousers and demonstrated to a shocked Urodynamics Society audience his papaverine-induced erection.[31] The drug Brindley injected into his penis was a non-specific vasodilator, an alpha-blocking agent, and the mechanism of action was clearly corporal smooth muscle relaxation. The effect that Brindley discovered established the fundamentals for the later development of specific, safe, and orally effective drug therapies.[32][better source needed][33][better source needed]

Gene therapy is being developed that would allow for weeks or months long effect, supporting erections. This gene therapy involves injection of a transfer gene, calcium-sensitive potassium channel (hMaxi-K), into the penis.[34][35][36]

A study done at the Medical College of Georgia has found that venom from the Brazilian wandering spider contains a toxin, called Tx2-6, causes erections. Scientists believe that combining this toxin with existing medication such as Viagra may lead to an effective treatment for erectile dysfunction.[37]