Eric Fitch Daglish (1892–1966) was a British engraver and author. He illustrated classics by Izaak Walton, Henry David Thoreau, Gilbert White and W. H. Hudson with exquisite wood engravings.[1] Daglish also authored a number of natural history and wildlife/countryside books. Many of his books are now out of print but the originals are sold over the Internet.

Daglish was born in Islington, London in 1892, the son of James William Daglish and Kate Annie Fitch. The family was originally from Whickham in County Durham but moved to London in the mid 19th century and established a cabinet making and upholstery business. 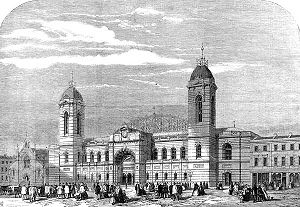 Daglish studied at Hereford County College and the University of London and went to Bonn, Germany to study science before World War I.[2] During the war he served in the Middlesex Yeomanry and the Royal Field Artillery in Ireland, Flanders and France. After the war he continued serving the army, becoming an education officer for the Woolwich Garrison. He went on to become a professional naturalist lecturing on zoology at Toynbee Hall and became a member of the Society of Wood Engravers and was taught wood engraving by close friend and fellow member Paul Nash.[2] In 1920 he exhibited three wood engravings at the opening exhibition of the Society.[2]

In 1922, Daglish left London and moved to Buckinghamshire Chilterns, where he sought to pursue his lifelong ambition to write about the countryside and natural history.[1] Just a year later, in 1923, he published his first book. He developed an interest in engraving and joined the Society of Wood Engravers, and become close friends with other members aside from Paul and John Nash such as Eric Gill who lived in his area. As his skills in wood engravings developed, he illustrated many of his books, mostly in black and white. However, his Birds Of The British Isles (1948) was in colour with a total of 48 engravings, 25 in colour and the cover of the book had a coloured wood engraving of goldfinches.[3] He also illustrated books by other authors, classics by Izaak Walton such as Compleat Angler, and the works of Henry David Thoreau, and also engraved the works of the naturalists Gilbert White and W. H. Hudson with high quality engravings. Daglish was also a keen painter and painted many pictures, notably of birds such as parrots.

Today Daglish's engravings are owned by the British Museum, the Victoria & Albert Museum,[2] art galleries in Liverpool, Manchester, and the Metropolitan Museum of New York, Boston and Philadelphia.

Daglish was also a noted dog enthusiast and judged at many dog shows, including Crufts. He authored several successful handbooks on various dog breeds such as The Dog Breeder's Manual in 1951.[4]

He died in 1966. He is survived by two sons (twins) and one daughter from his first marriage to Alice Archer, and by one daughter and a son from his second marriage to Esther Lena Rutland. His son Stephen Daglish has conducted and published research on the tracing the origins of the Daglish family name.

A selection of books written by or illustrated by Eric Fitch Daglish: