Eric IX[1] of Sweden, (Swedish: Erik Jedvardsson; Erik den helige; died 18 May 1160), also called Eric the Lawgiver, Erik the Saint, Eric the Holy, and, in Sweden, Sankt Erik, meaning Saint Eric, was a Swedish king c. 1155-60. No historical records of Eric have survived, and all information about him is based on later legends that were aimed at having him established as a saint. The Roman Martyrology of the Roman Catholic Church names him as a saint memorialized on 18 May.[2]

As later kings from the House of Eric were consistently buried at Varnhem Abbey near Skara in Västergötland, the family is considered to have Geatish roots like other medieval ruling houses in Sweden. He had a brother, whose name began with a "J". This brother has been identified with a Joar Jedvardsson, which is why modern sources sometimes use the name Eric Jedvardson. He is named as "Eirik the Saint, son of Jatvard" in King Sverre's Saga.[3]

He was a rival king, from 1150, to Sverker the Elder who had ascended the throne c. 1130 and was murdered in 1156, after which Eric was recognized in most or all provinces. Eric's reign ended when he was murdered in Uppsala in May 1160. He is said to have been murdered by Emund Ulvbane, an assassin who was hired by people working for the Sverker dynasty, in order for them to regain the control of the kingdom, or alternatively by Magnus Henriksson, another claimant, who is said in some sources to have succeeded him briefly as king. 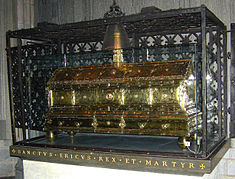 Later, Swedes believed a miracle occurred at Eric's death: a fountain was said to have sprung from the earth where the king's head fell after being chopped off. Eric would later be considered a saint whose feast day in the Roman Catholic Church and Evangelical Lutheran Church in America is 18 May, although he was never formally canonized by the pope. The relic casket of Eric is on display in Uppsala Cathedral (Uppsala domkyrka). The casket contains bones of a male, with traces of injury to the collarbone. The original medieval casket was melted down by Johan III, partly in order to pay off the Älvsborg ransom required by the Treaty of Stettin (1570) and to finance war against Russia. The present Renaissance style casket was commissioned in the 1570s to contain his relics by Johan's Polish Catholic queen, Catherine Jagiellon. Eric is the patron saint of Stockholm and his crowned head is depicted in the city's coat of arms.

According to legends, Eric did much to consolidate Christianity in his realm and spread the faith into Finland. In an effort to conquer and convert the Finns, he allegedly led the First Swedish Crusade against the Finns and persuaded an English Bishop Henry of Uppsala to remain in Finland to evangelize the Finns, later becoming a martyr.[4] 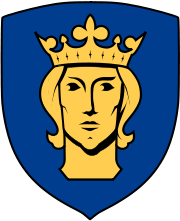 Coat of arms of Stockholm, depicting Eric the Saint and based on the medieval seal.

Eric was responsible for codifying the laws of his kingdom,[4] which became known as King Eric's Law (also the Code of Uppland). Additionally, he established a monastic chapter in Old Uppsala, which had come from the Danish abbey of Odense.

In reaction to Eric's insistence that tithes be paid to support the Church as they were elsewhere in Europe, some Swedish nobles joined forces with Magnus Henrikson, great-great-grandson of the late king Sweyn Estridson of Denmark. Magnus the Strong son of the Danish king Niels of Denmark (c. 1064–1134) has been confused with Magnus Henrikson but he did not outlive his father. Eric was accosted by the rebel Swedish nobles near Uppsala at Östra Aros as he was leaving church after hearing Mass on Ascension Day. He was thrown to the ground from his horse, tortured, ridiculed, then beheaded.

The king was buried in the church of Old Uppsala, which he had rebuilt around the burial mounds of his pagan predecessors. In 1167, his body was enshrined and his relics and regalia were transferred to the present cathedral of Uppsala, built on the site of Eric's martyrdom, in 1273.

In an effort to consolidate his position, Eric's son Knud encouraged the veneration of his father as a martyr. Facts and fiction about his life were inseparably mixed together. The movement of Eric's relics extended the depth of his religious following. On his feast there were processions from the cathedral to Old Uppsala to petition for a good harvest.

File:Eric the Holy of Sweden Torsgatan sculpture 2012 Stockholm.jpg
One of the many images of Saint Eric in Stockholm as the city's symbolic patron.

Saint Eric is portrayed in art as a young king being murdered during Mass with the bishop Henry of Uppsala. In Uppsala Cathedral there is a series of late medieval paintings depicting Eric and Henry of Uppsala.

According to the legend, King Erik the Saint was slain while he attended the mass at the ecclesia Sancte trinitatis 'Trinity church' at Mons Domini. The current Trinity church in Uppsala was founded in the late 13th century and cannot be the church where Eric was slain. Scholars have discussed different locations of the older Trinity church, but the presence of pre-cathedral graves in the vicinity of the cathedral might suggest that the original Trinity church was located at the same spot as the cathedral. In an effort to elucidate this early history of the cathedral and Mons Domini, archaeologist Magnus Alkarp and geophysicist Jaana Gustafsson examined a large part of the cathedral with ground-penetrating radar (GPR). The results from this investigation confirmed the existence of an older building beneath the cathedral, in all the details corresponding with the outline of a 12th-century Romanesque church, which implies that the cathedral is the site of the earlier Trinity church.

On April 24, 2014, AP reported[5] that Swedish researchers had opened the reliquary containing what is believed to be the remains of King Erik IX. The reliquary was made in 1570s to replace an earlier reliquary. The funerary crown that was interred with him went on exhibit at the Uppsala Cathedral that June,[6] along with relics from other local churches.

Married to Kristina Björnsdotter of the Danish House of Estridsen.