Eric Frederick Trump (born January 6, 1984, in New York City, New York) is an American businessman and philanthropist. He is the third child and second son of the 45th President of the United States, Donald Trump, and his first wife, Ivana Trump. Alongside his older brother Donald Trump Jr., he serves as a trustee of The Trump Organization. A longtime executive vice president of the firm, Trump and his brother are running the company during their father's administration. From 2007 to 2016, he founded and led The Eric Trump Foundation, a charity that raised money for St. Jude Children's Research Hospital.

Trump was born in Manhattan and attended Trinity School. His parents divorced in 1991, when he was seven years old. As a young boy, Trump spent his summers in the Czech countryside near Zlin with his maternal grandparents. His grandfather, Milos Zelnicek, who passed away in 1990, was an engineer; his grandmother, Maria, was a worker in a shoe factory. His grandfather taught Trump how to hunt and fish. Trump describes his parents as loving but strict disciplinarians who emphasized hard work, good grades, and clean living. Trump's father famously said, "No drinking, no drugs, no smoking ... and you better get good grades."[2]

In 2002, he graduated from The Hill School and subsequently served on its board until 2013.[3] He graduated with a degree in finance and management, with honors, from Georgetown University in Washington, D.C. Trump flirted with the idea of majoring in engineering but chose finance and management in order to increase his career options. He minored in psychology.[4][5]

Trump started accompanying his father to job sites and negotiations from a very young age. Later in his youth he spent summers mowing lawns, laying tile, cutting rebar, hanging chandeliers, and performing various other work at his father's properties. Trump briefly toyed with the idea of other careers but decided to join the family business while he was a high school student.[5] Speaking of his father, Trump said, "He made us work and I think that’s what a great father does."[2]

On July 4, 2013, Trump became engaged to his longtime girlfriend Lara Lea Yunaska (born October 12, 1982), an associate producer on the syndicated television news program Inside Edition. The couple dated for six years before marrying. They married on November 8, 2014, at Mar-a-Lago Club in Palm Beach, Florida,[6] and had their wedding ceremony under a "crystal-embellished chuppa[h]".[7][8]

In March of 2017, Trump announced via Twitter that his wife was pregnant with a baby boy with a due date in September. This will be the couple's first child. The boy will be President Trump's ninth grandchild.[9][10]

Trump is an executive vice president at the Trump Organization. He is responsible for the development and acquisition of projects around the world.[11] With his father, he has overseen the expansion of the Trump Golf portfolio of properties, increasing the number from three, when he joined the company, in 2006, to 18 in 2017. The Trump Organization has courses in New York, New Jersey, Pennsylvania, Florida, North Carolina, California, Scotland, Ireland, Indonesia, and Dubai.[citation needed] He worked with his sister, Ivanka, to redesign and renovate Trump National Doral and its Blue Monster course in Miami, Florida.[12]

In 2012, Trump was recognized by Forbes magazine among their top "30 under 30" in real estate and by the New York Observer as one of the "20 Most Important Young Philanthropists".[13] The New York Observer is published by his brother-in-law, Jared Kushner.[14] In 2013, Trump earned Wine Enthusiast Magazine's "Rising Star of the Year" Award.[15] 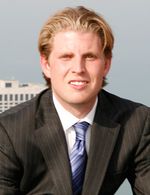 In 2007, Eric Trump established the Eric Trump Foundation, a public charity with the purpose to raise money for terminally-ill children and cancer patients at St. Jude Children's Research Hospital, Tennessee.[16][17]

The Eric Trump Foundation has advertised that its golf charity events raised money exclusively for St Jude's Children's Research Hospital, with 95–100% of the money raised going toward the charity. Public tax records show that the foundation applied significant amounts of the funds raised to pay costs of the events to the Trump Organization for use of its facilities.[18] Additionally, the foundation donated to charitable causes other than St Jude and made grants to several other charities, including at least three animal welfare organizations and the American Society for Enology and Viticulture, a California wine industry organization.[18]

On November 30, 2012, the foundation committed to raising $20 million over a 10-year period for the naming rights to the new Surgery and ICU Center in a $198 million tower under construction on the St. Jude campus".[19] The Kay Research and Care Center was officially opened on February 19, 2015.[20]

St. Jude’s September 2013 press release stated that the 7th Annual Eric Trump Foundation Golf Invitational on September 9, 2013, at the Trump National Golf Club in Briarcliff, New York, had "… raised 1.5 million for the kids of St. Jude", for a total of $6 million since 2006.[22]

On December 30, 2016, Richard C. Shadyac Jr., the president of the fundraising organization of St. Jude Children's Research Hospital, wrote a letter to the Eric Trump Foundation stating that the foundation and "... related efforts, such as an Eric Trump Foundation-affiliated team that participates in the New York City Marathon", had raised $16.3 million for the hospital since the charity's inception 10 years ago.[16]

Eric Trump was a key advisor, fundraiser, and campaign surrogate during his father's successful run for the presidency in 2016. Trump and his wife made campaign appearance in numerous states on behalf of his father.[23]

On August 2, 2016, in a television appearance on CBS This Morning, Trump was asked to comment on his father's controversial statement to USA Today the previous day in which he said that if his daughter were ever subjected to sexual harassment in the workplace, he hoped she would find another company to work for or switch careers. Eric Trump said, "Ivanka is a strong, powerful woman, she wouldn't allow herself to be objected [sic] to it."[24]

A suspicious package full of white powder was sent to Trump's Manhattan home in March of 2016. It included a note saying that he and his siblings would be harmed if his father did not withdraw from the race.[23]

In 2010, People for the Ethical Treatment of Animals (PETA) criticized Trump, a big game hunter, for an African hunting trip he took with Donald Trump, Jr., his older brother. PETA condemned the pair after photos showed the brothers on an organized safari in Zimbabwe, where they hunted animals.[25] The director general of the Zimbabwe Parks and Wildlife Management Authority, V. Chandenga, issued an official response supporting the brothers and calling any allegations of illegality "baseless" and "false".[26] Both brothers defended their safari via Twitter, affirming their actions as hunters and longtime advocates of the outdoors.[27] Their father also addressed the controversy, saying on TMZ that he fully supported his sons.[27]