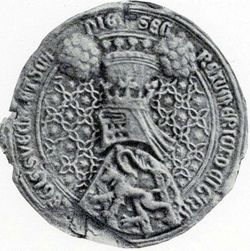 The seal of king Erik Magnusson.

In 1343 Eric and his brother Haakon were elected heirs of Sweden and Norway, respectively . That Haakon got the Norwegian throne in 1355 (causing the union between Norway and Sweden to split) while Eric didn't get any position in the Swedish council might have affected his choice to lead a rebellion against his father in 1355. In 1357 the rebellion had forced Magnus to share Sweden with his son Eric who got to rule most of Southern Sweden and Finland. Sweden was reunited again in 1359 when father and son became reconciled, and co-ruled Sweden until Eric's death a few months later. While dying Eric accused his mother Blanche of Namur of poisoning him. Quite soon after his death his wife Beatrice died too. It is generally believed that they died of the Black Death.