Eric the Victorious (Old Norse: Eiríkr inn sigrsæli, Modern Swedish: Erik Segersäll) (945? – c. 995) was the first Swedish king (c. 970–995) about whom anything definite is known.[2] Whether he actually qualifies as King of Sweden has been debated, as his son Olof Skötkonung was the first ruler documented to have been accepted both by the Svear around Lake Mälaren and by the Götar around Lake Vättern.

Sometimes, Eric the Victorious is referred to as either King Eric V or VI, modern inventions based on counting backwards from Eric XIV (1560–68), who adopted his numeral according to a mythological history of Sweden. Whether or not there were any Swedish monarchs named Eric before Eric the Victorious is disputed, with some historians claiming that there were several earlier Erics,[3] and others questioning the reliability of the primary sources used and the existence of these earlier monarchs.[4] The list of monarchs after him is also complicated (see Eric and Eric, as well as Erik Årsäll), which makes the assignment of any numeral problematic.

His original territory lay in Uppland and neighbouring provinces. He acquired the name "victorious" as a result of his defeating an invasion from the south in the Battle of Fýrisvellir close to Uppsala.[5] Reports that Eric's brother Olof was the father of his opponent in that battle, Styrbjörn the Strong, belong to the realm of myth.[6]

The extent of his kingdom is unknown. In addition to the Swedish heartland round lake Mälaren it may have extended down the Baltic Sea coast as far south as Blekinge. According to Adam of Bremen, he also briefly controlled Denmark after having defeated Sweyn Forkbeard.

According to the Flateyjarbok, his success was because he allied with the free farmers against the aristocratic jarl class, and it is obvious from archaeological findings that the influence of the latter diminished during the last part of the tenth century.[7] He was also, probably, the introducer of the famous medieval Scandinavian system of universal conscription known as the ledung in the provinces around Mälaren.

In all probability he founded the town of Sigtuna, which still exists and where the first Swedish coins were stamped for his son and successor Olof Skötkonung.

Eric the Victorious appears in a number of Norse sagas, historical stories which nonetheless had a healthy dose of fiction. In various stories, he is described as the son of Björn Eriksson, and as having ruled together with his brother Olof. It was claimed that he married the infamous (and likely fictional) Sigrid the Haughty, daughter of the legendary Viking Skagul Toste, and later divorced her and gave her Götaland as a fief. According to Eymund's saga he took a new queen, Auð, the daughter of Haakon Sigurdsson, the ruler of Norway.

Before this happened, his brother Olof died, and a new co-ruler had to be appointed, but the Swedes are said to have refused to accept his rowdy nephew Styrbjörn the Strong as his co-ruler. Styrbjörn was given 60 longships by Eric and sailed away to live as a Viking. He would become the ruler of Jomsborg and an ally and brother-in-law of the Danish king Harold Bluetooth. Styrbjörn returned to Sweden with an army, although Harald and the Danish troops supposedly turned back. Eric won the Battle of Fýrisvellir, according to Styrbjarnar þáttr Svíakappa after sacrificing to Odin and promising that if victorious, he would give himself to Odin in ten years. 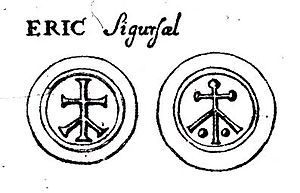 In 1691 coin expert Elias Brenner published designs allegedly used by King Eric, but a minting of coins by Eric is unknown to modern scientists, and these attributions are considered inaccurate;[8] Brenner's methods are not considered reliable on early medieval Swedish coins.[9]

The German ecclesiastic chronicler Adam of Bremen (c. 1075) provides the by far oldest narrative about Eric, and differs substantially from the sagas. As his spokesman he refers to the current Danish king Sven Estridson whom he interviewed for his chronicle. Adam omits the Battle of Fýrisvellir but relates that Eric gathered a large army and invaded Denmark, turning against king Sveyn Forkbeard. The immediate reason for the attack is not disclosed by Adam. However, it had to do with an alliance between Eric and the Polish ruler Mieszko I (940-992) who gave his daughter (in the later sagas known as Sigrid the Haughty, in Polish possibly Świętosława) in marriage to the king.[10] Several battles were fought at sea, with the result that the Danish forces, attacked from the other side by the Slavs, were entirely annihilated.[11] After his victory, Eric kept Denmark while Sveyn was forced to flee, first to Norway, then to England, and finally to Scotland whose king received the refugee with kindness.[12]

According to Adam, Eric's rule in Denmark coincided with increased Viking activity in northern Germany. A fleet of Swedish and Danish ships sailed up the Elbe and landed at Stade in Saxony. A Saxon army confronted the invaders but was badly defeated. Several prominent Saxons were captured and brought to the ships while the Vikings ravaged the province without meeting resistance. One of the prisoners, margrave Siegfried, managed to escape at night with the help of a fisherman. The infuriated Vikings then maimed their remaining prisoners and threw then on land. However, margrave Siegfried and duke Benno soon gathered a new army and defeated the Vikings who were encamped at Stade. Another Viking detachment was tricked deep into the desolate marsh of Glindesmoor by a captured Saxon knight, and annihilated by the pursuing Germans.[13]

Adam characterizes Eric as a heathen and initially very hostile to the Christian religion. Nevertheless a number of missionaries were at work during his reign, both foreign and belonging to recently converted Nordic families. Among them was Odinkar the Elder who preached in Fyn, Sjaelland, Skåne and Sweden. Eventually Eric accepted baptism while he stayed in Denmark, apparently the first Swedish king to do so. Due to this significant event the missionaries were allowed to come over from Denmark to Sweden where they "worked valiantly in the name of the Lord". After some time Eric forgot about the Christian faith and reverted to the religion of his ancestors. When Eric died, Sveyn Forkbeard returned from exile and regained Denmark. He furthermore married the widow of Eric, mother to his successor Olof Skötkonung. In that way an alliance between the Swedish and Danish royal houses was created.[14]

Adam's account seems to date the demise of Eric the Victorious between 992 (the accession of his ally Boleslaw I Chrobry) and 995 (when his son Olof's coinage in Sigtuna starts). The discrepancies between Adam and other pieces of information have led to a variety of interpretations among Swedish historians, especially concerning Eric's marriages. The details about his conquest of Denmark have been questioned since they are unsupported by other materials. Still, a comparison between Adam and the Nordic sagas shows that he made an imprint in the collective memory as a warlike and successful ruler.