Erich Maria Remarque[1] (22 June 1898 – 25 September 1970), born Erich Paul Remark, was a German novelist who created many works about the terror of war. His best known novel All Quiet on the Western Front (1928) is about German soldiers in the First World War, which was also made into a Oscar-winning movie. His book made him an enemy of the Nazis, who burned many of his works.

During World War I, Remarque was conscripted into the army at the age of 18. On 12 June 1917, he was transferred to the Western Front, 2nd Company, Reserves, Field Depot of the 2nd Guards Reserve Division at Hem-Lenglet. On 26 June, he was posted to the 15th Reserve Infantry Regiment, 2nd Company, Engineer Platoon Bethe, and was stationed between Torhout and Houthulst. On 31 July, he was wounded by shrapnel in the left leg, right arm and neck, and was repatriated to an army hospital in Germany where he spent the rest of the war.[2]

After the war he continued his teacher training and worked from 1 August 1919 as a primary school teacher in Lohne, at that time in the county of Lingen, now in the county of Bentheim. From May 1920 he worked in Klein Berßen in the former County of Hümmling, now Emsland, and from August 1920 in Nahne, which has been a part of Osnabrück since 1972. On 20 November 1920 he applied for leave of absence from teaching.

Remarque worked at a number of different jobs, including librarian, businessman, journalist, and editor. His first paid writing job was as a technical writer for the Continental Rubber Company, a German tire manufacturer.[3] 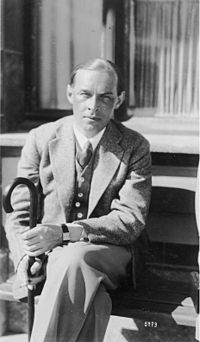 At the age of 16, Remarque had made his first attempts at writing; this included essays, poems, and the beginnings of a novel that was finished later and published in 1920 as The Dream Room (Die Traumbude). When he published All Quiet on the Western Front, Remarque changed his middle name in memory of his mother and reverted to the earlier spelling of the family name to dissociate himself from his novel Die Traumbude.[4] The original family name, Remarque, had been changed to Remark by his grandfather in the 19th century.

In 1927, Remarque made a second literary start with the novel Station at the Horizon (Station am Horizont), which was serialised in the sports journal "Sport im Bild" for which Remarque was working. It was published in book form only in 1998. His work, All Quiet on the Western Front (Im Westen nichts Neues), was written in 1927, but Remarque was not immediately able to find a publisher.[5] The novel, published in 1929, described the experiences of German soldiers during World War I. A number of similar works followed; in simple, emotive language they described wartime and the postwar years.

In 1931, after finishing The Road Back (Der Weg zurück), Remarque bought a villa in Porto Ronco, Switzerland, planning to live both there and in France.[citation needed]

His next novel, Three Comrades (Drei Kameraden), spans the years of the Weimar Republic, from the hyperinflation of 1923 to the end of the decade. Remarque's fourth novel, Flotsam (in German titled Liebe deinen Nächsten, or Love Thy Neighbour), first appeared in a serial version in English translation in Collier's magazine in 1939, and Remarque spent another year revising the text for its book publication in 1941, both in English and German. His next novel, Arch of Triumph, first published in 1945 in English, and the next year in German as Arc de Triomphe, was another instant best-seller and reached worldwide sales of nearly five million. His last novel was Shadows in Paradise , he wrote it while living at 320 East 57th Street in New York City. The apartment building " played a prominent role in his novel".[6]

On 10 May 1933, the German government, on the initiative of the Nazi propaganda minister, Joseph Goebbels, banned and publicly burned Remarque's works. Remarque finally left Germany to live at his villa in Switzerland. According to the data received from the Remarque museum in Osnabrück, Remarque's German background as well as his Catholic faith were never questioned by the Nazis. The Nazis continued to decry his writings claiming that anyone who would change the German name spelling, Remark, to the French one, Remarque, can not possibly be a true German. The Nazis also claimed, falsely, that Remarque had not seen active service during World War I. In 1938, Remarque's German citizenship was revoked and then in 1939, after he and his ex-wife were remarried to prevent her repatriation to Germany, they left Porto Ronco, Switzerland for the United States.[7] They became naturalized citizens of the United States in 1947.[8]

In 1943, the government arrested his youngest sister, Elfriede Scholz, who had stayed behind in Germany with her husband and two children. After a trial in the "Volksgerichtshof" (Hitler's extra-constitutional "People's Court"), she was found guilty of "undermining morale" for stating that she considered the war lost. Court President Roland Freisler declared, "Ihr Bruder ist uns leider entwischt—Sie aber werden uns nicht entwischen" ("Your brother is unfortunately beyond our reach—you, however, will not escape us"). Scholz was beheaded on 16 December 1943, and the cost of her prosecution, imprisonment and execution—495.80 Reichsmark—was billed to her sister Erna.[9] In exile Remarque was unaware of his relatives' fate until after the war, and would dedicate his 1952 novel Spark of Life (Der Funke Leben) to his late sister, but the dedication was omitted in the German version of the book, reportedly because he was still seen as a traitor by some Germans.[10]

In 1948, Remarque returned to Switzerland, where he spent the rest of his life. There was a gap of seven years — a long silence for Remarque — between Arch of Triumph and his next work, Spark of Life (Der Funke Leben), which appeared both in German and in English in 1952. While he was writing The Spark of Life Remarque was also working on a novel, Zeit zu leben und Zeit zu sterben (Time to Live and Time to Die). It was published first in English translation in 1954 with the not-quite-literal title A Time to Love and a Time to Die. In 1958, Douglas Sirk directed the film A Time to Love and a Time to Die in Germany, based on Remarque's novel. Remarque made a cameo appearance in the film in the role of the Professor.

In 1955, Remarque wrote the screenplay for an Austrian film, The Last Act (Der letzte Akt), about Hitler's final days in the bunker of the Reich Chancellery in Berlin, which was based on the book Ten Days to Die (1950) by Michael Musmanno. In 1956, Remarque wrote a drama for the stage, Full Circle (Die letzte Station), which played in both Germany and on Broadway. An English translation was published in 1974. Heaven Has No Favorites was serialised (as Borrowed Life) in 1959 before appearing as a book in 1961 and was made into the 1977 film Bobby Deerfield. The Night in Lisbon (Die Nacht von Lissabon), published in 1962, is the last work Remarque finished. The novel sold some 900,000 copies in Germany.[citation needed]

His first marriage was to the actress Ilse Jutta Zambona in 1925.[11] Their marriage was stormy and unfaithful on both sides. Remarque and Zambona divorced in 1930, but in 1933 they fled together to Switzerland.[12] In 1938 they remarried, to prevent her from being forced to return to Germany, and in 1939 they emigrated to the United States where they both became naturalised citizens in 1947.[13] They divorced again on 20 May 1957, this time for good. Ilse Remarque died on 25 June 1975.[citation needed]

During the 1930s, Remarque had relationships with Austrian actress Hedy Lamarr, Mexican actress Dolores del Río[14] and then with Marlene Dietrich,[15] and in the 1940s with Greta Garbo.[4] The love affair with Dietrich began in September 1937 when they met on the Lido while in Venice for the film festival and continued through at least 1940, maintained mostly by way of letters, cables and telephone calls. A selection of their letters were published in 2003 in the book "Sag Mir, Dass Du Mich Liebst" ("Tell Me That You Love Me")[16][17] and then in the 2011 play Puma.[18]

Remarque married actress Paulette Goddard in 1958 and they remained married until his death in Locarno on 25 September 1970, aged 72.[19] Remarque was interred in the Ronco Cemetery in Ronco, Ticino, Switzerland. Goddard died in 1990 and was interred next to her husband. She left a bequest of $20 million to New York University to fund an institute for European studies, which is named in honour of Remarque.[20] The first Director of The Remarque Institute was Professor Tony Judt.[21] Remarque's papers are housed at NYU's Fales Library.[22] NYU also named an undergraduate dormitory building after her: Paulette Goddard Hall.

Efforts to raise CHF 6.2M ($7M), to buy and save the villa of Erich Maria Remarque and Paulette Goddard from almost certain demolition are underway. The intent is to transform the Casa Monte Tabor into a museum and home to an artist-in-residence programme, focused on creativity, freedom and peace.[23] 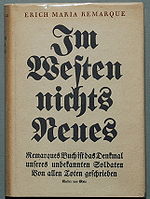